Researchers Take Unique Approach, looking outside of cells for a COVID-19 treatment 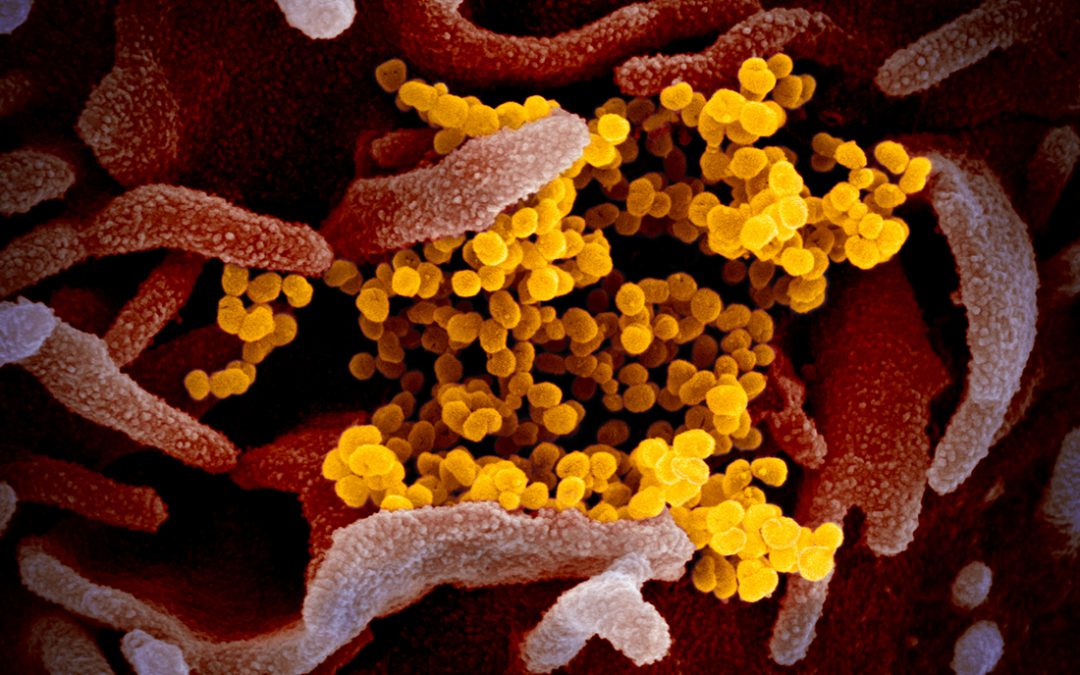 Researchers are trying to find anti-viral drugs for the novel coronavirus, which is yellow in the microscope image above. (National Institute of Allergy and Infectious Diseases-Rocky Mountains Laboratories, NIH)

Researchers at Northwestern University are using a biotechnology technique they developed for portably producing vaccines and for sensing contaminants in water to try to speed up the discovery of COVID-19 anti-viral drugs.

Michael Jewett, a professor of chemical and biological engineering at Northwestern, and his colleagues are working with cell-free protein synthesis systems, which create proteins outside of a cell.

“We think that basically the cell-free system can accelerate the design and discovery cycle,” he said.

The technique could allow researchers to discover an anti-viral for COVID-19 faster than they could by using cells.

“We’re hearing that a lot of the challenge in producing anti-virals and even vaccines is that it takes a long time,” Daniel said.

She said that when working with cells, researchers have to keep them alive and make sure the temperature is just right. These tasks are not necessary in a cell-free system. Researchers can create more of a product in a shorter time, she said.

Jewett’s team and researchers at ShanghaiTech University found that a cell-free system can produce valinomycin, a potential antiviral molecule, according to a recent paper.

Valinomycin is a natural product, which is a small molecule that an organism built, Jewett said. “What we’re hoping is that, you know, this could be an interesting potential anti-viral,” he said.

Past research found that valinomycin can slow the growth of SARS in cell cultures, he said. He and other researchers want to know if valinomycin could act as a treatment for COVID-19, which is genetically similar to SARS. Jewett and his colleagues’ cell-free protein synthesis system made enzymes — proteins that speed up chemical reactions — and those enzymes then helped make valinomycin.

Jewett said his lab could potentially alter valinomycin’s structure to make it safer — the Environmental Protection Agency lists it as an extremely hazardous substance — but also a more potent drug.

“I think our hope is that the cell-free systems we’re developing can be used to identify new molecules,” he said.

Jewett said that his lab will have to partner with other researchers who will test whether the molecules are safe and effective in treating a disease.

Jewett said cell-free protein synthesis allows researchers to discover new molecules faster than they could while working with cells. “I think what’s so exciting about cell-free systems is that they’re fast,” he said.

He said that when working in cells, researchers order DNA from a company. They shuttle the DNA into a cell, and then the cell has to grow and make the protein they’re studying, such as an enzyme. This process takes weeks or months, while a cell-free system can build a protein in days. With a cell-free system, scientists can also directly access the reactions of a cell, which are normally stuck within the cell’s wall, he said.

Weston Kightlinger, a PhD student in Jewett’s lab, is trying to find proteins that could bind to the novel coronavirus and stop it from entering cells. He said academic labs and companies have found hundreds or even thousands of antibodies that can bind to the virus. He is using cell-free protein synthesis to try to narrow down the candidates.

Jewett said that scientists are trying to help address the pandemic in any way they can.

“I think for those of us who have the ability to try to pivot our research or change it in a new direction to be able to address this, we’re doing that,” he said.