The Trump administration’s attacks on DACA highlights the need for a comprehensive immigration policy, experts say 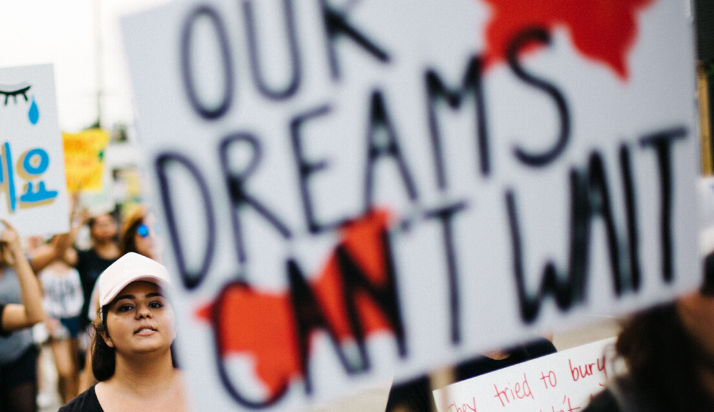 The Trump administration’s ongoing attacks on the Deferred Action for Childhood Arrivals program are an issue of “partisan politicization,” said Thomas Saenz, president and general counsel of the Mexican American Legal Defense and Education Fund on Monday.

“What we know is consistently, and even today, that the vast majority of people in the country from both parties, support providing a pathway to citizenship, or at least relief from removal and work authorization for DACA recipients,” Saenz said during a live webinar hosted by the American Bar Association on the U.S. Supreme Court’s recent 5-4 ruling, which blocked the Trump administration’s termination of DACA.

Legal and immigration experts Pedro Villalobos, Allen Orr Jr. and Daniela Alulema joined Saenz in the webinar, where they called attention to the current and historical politicization of immigration policy in the U.S. and pressed for more comprehensive legislative solutions to the U.S. immigration system overall.

“We still have an immigration system that discriminates on the basis of what country you come from,” Saenz said. “Next time you hear any politician refer to ‘the line,’ it’s not one line. The line you’re in depends on what country you come from.” As Saenz and other panelists emphasized, the U.S. still needs more comprehensive immigration legislation that extends beyond SCOTUS’ ruling on DACA —a program that provides renewable, two-year relief from deportation and work authorization to eligible undocumented youth— and can lead to permanent solutions for immigrant communities.

Villalobos, who serves as the assistant district attorney for the Travis County Attorney’s Office and is the first DACA recipient to be licensed by the State of Texas, also called attention to the “political battle” surrounding DACA and his experiences becoming a licensed attorney in his own state.

A 2018 Texas lawsuit, which stated that former President Obama exceeded his bounds when he enacted DACA, was rekindled shortly after the SCOTUS ruling when Texas Attorney General Ken Paxton issued a statement announcing he will continue litigating the issue in the Southern District of Texas. “We are disappointed with today’s SCOTUS decision, but it does not resolve the underlying issue that President Obama’s original executive order exceeded his constitutional authority,” Paxton’s June 18 statement read.

While DACA holders and advocates for immigrant rights celebrated the SCOTUS ruling, many immigrant advocacy organizations across the country have added that it’s only a “temporary victory” and the future for DACA recipients remains in jeopardy.

“As a DACA recipient, I am slightly relieved that the Supreme Court gave us that outcome a few days ago, but definitely the ultimate battle is going to be in November,” said Alulema, the Program Director at the Center for Migration Studies, referring to the upcoming presidential election. “We’ll figure out if we’ll have another four years of this or [if we’re] finally able to catch a break and try to undo all the damage that has been done by this administration.”

Panelists cautioned DACA recipients against thinking of the SCOTUS ruling as an all-out win, especially in light of President Trump’s recent claims to continue efforts to end the Obama-era program, signaling that DACA holders are not entirely in the clear.

Saenz said that Congress is key to more comprehensive immigration policy but that Senate leadership has, and continues, to prevent significant progress. Specifically, he called attention to the DREAM Act, a bill that came closest to full passage in late 2010 when it was passed in the House and would have provided a path to citizenship for eligible undocumented youth but failed to pass the Senate after a successful filibuster.

“If the parties were acting consistent with the views of the vast majority of people in this country, then we would have a DREAM Act already,” Saenz said. “That politicization in DC even ten years ago is what puts us in the situation we are in today.”