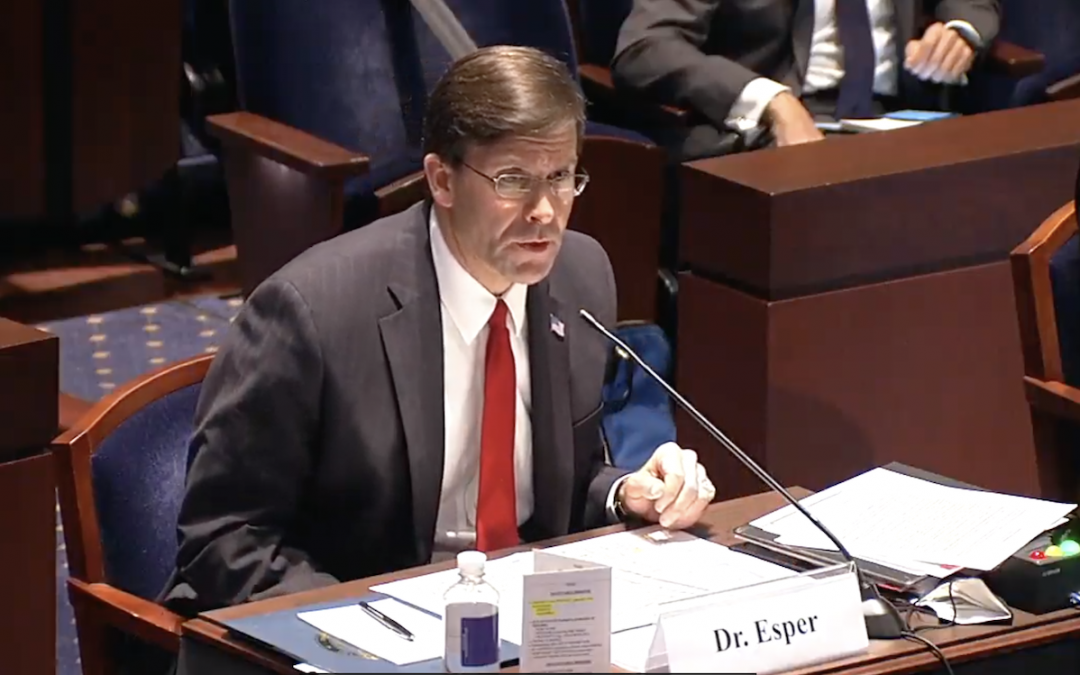 Secretary of Defense Mark Esper said Thursday that it is “still unclear” who gave the order to disperse thousands of protesters in Lafayette Square outside the White House so President Donald Trump could walk through the park for a photo-op.

Law enforcement officers forcefully cleared Lafayette Park of the protesters who were rallying against the murder of George Floyd and racial injustice in the early evening of June 1. It has been reported that U.S. Park Police and the D.C. National Guard fired smoke canisters and pepper balls, which cause irritation to the eyes and skin. A Lakota military helicopter flew close to the ground, causing protesters to disperse with the intense sound and flying debris.

Trump then walked across the square to the front of St. John’s Episcopal Church for a photo session as he held aloft a Bible, flanked by Esper, Chairman of the Joint Chiefs of Staff Gen. Mark Milley, Attorney General William Barr and other White House officials.

Testifying before the House Armed Services Committee on Thursday afternoon, Esper said that after discussions with Army Secretary Ryan McCarthy and D.C. National Guard Commander Maj. Gen. William Walker, “It’s still unclear to me who gave the direction to clear the park at that moment.”

“I’m sorry but it’s a pretty big decision,” Smith said, “… And it just sort of happened?”

“I don’t know. I have never inquired,” Esper responded, saying he never pursued the decision-making process with anyone because “you get caught up on other things.”

Esper stated no active duty military engaged with protesters, though Milley said he recommended, and Esper ordered, 1,700 active duty troops to an “increased alert posture” in the vicinity of Washington.

Esper testified that officers across divisions were sharing gear, which could have contributed to the confusion. “At one point, the National Guard, for example, cross-leveled its riot shields and lent them to the law enforcement,” Esper said. “So if you saw police out there using a military police show (of force) it’s because we cross leveled and that’s a lesson learned. We got to figure out a way to mask the name ‘military police’ so we don’t confuse who is actually doing the crowd control.”

Protester Sarah Rosner, a 37-year-old Washington bartender, was on the street that Monday when an officer used his riot shield to push her to the ground and she fell on her head. In an interview Thursday, she said she suffered a minor concussion and six weeks later her ribs still hurt. Rosner said the officers had retreated back to the White House, but then came back to clear the street all at once. They pepper sprayed her and other protesters, but she had worn goggles to protect her eyes. Her friends were able to get her to safety where she received medical attention.

“I’m on the ground and I look over and I see the yellow church,” Rosner said, referencing St. John’s. “Why couldn’t they have waited until after curfew?” Rosner said curfew in D.C. was less than an hour later at 7 p.m.

Esper told the House committees that the National Guard did not advance on the crowd, shoot rubber bullets or employ chemical agents of any kind. “Rather, the guard remained in a static role as backup to law enforcement, if needed,” Esper said.

It was hard for Rosner to tell if the law enforcement officials were police or another division. “Some of them had a Secret Service vest and a police shield,” Rosner said. “They would say different things.”

During the hearing, Esper also was asked by several representatives about the Insurrection Act, which allows the president to deploy active duty military force in American cities to quell insurrections, terrorist attacks or help in natural disasters. Before Trump headed into Lafayette Park, he spoke in the Rose Garden, where he told reporters that he had advised governors he would deploy the military to cities with protests to end them

Rep. Mike Rogers, R-Ala., asked Esper whether he thought the Insurrection Act needed to be modified, to which Esper responded that it has “endured well” and that nothing has happened that would compel him to change it.

There has also been controversy over Esper’s use of the word “battlespace” to describe American cities where there have been protests. While on a White House call with governors earlier that day, he encouraged the leaders to let the National Guard “dominate the battlespace” in clearing protesters.

Esper initiated an investigation into the events of June 1 and said a report will likely be sent to the committee next week.

Esper and Milley were asked to testify to the same Committee last month but turned down the request.