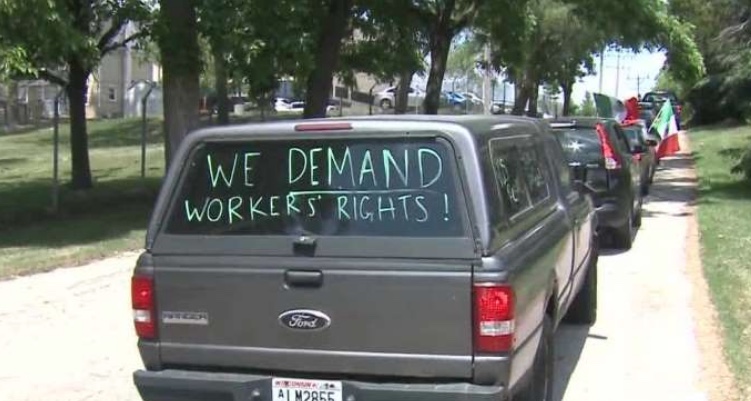 A caravan spotted in Wisconsin's Racine County in June in response to the death of an Echo Lake Foods' worker due to COVID-19. (VOCES DE LA FRONTERA)

As COVID-19 uproots businesses and lives across the country, Wisconsin’s essential front-line workers, including thousands of immigrants, remain among the most vulnerable.

Many immigrant workers must decide: Stay at home and risk losing a paycheck or go to work but risk the coronavirus. That decision is further complicated because many lack health care coverage.

Even legal immigrants living in households with those who remain in the country illegally are ineligible for federal stimulus dollars meant to help families during the economic downturn.

In Milwaukee, Julio Gumeta, a 26-year-old immigrant who has been living in Wisconsin for the past 19 years, said immigrant workers are “not getting the protections that many of the citizens staying at home that use (their) services are getting.”

Gumeta, a recipient of federal Deferred Action for Childhood Arrivals protection for immigrants who entered the country illegally as a child, is a former employee of a Milwaukee-based fresh food supplier, where his mother currently works. According to Gumeta, immigrants make up the vast majority of the company’s labor force. Since the pandemic began, his mother has continued to work there — risking exposure to COVID-19 with no health insurance — so that she can provide for her family.

“In those workplaces where it’s mostly immigrants, their safety is being ignored,” said Gumeta. Employers are “making money out of our labor, out of our bodies, and at the same time, they have complete disregard for our lives.”

CARES Act
In March, the federal government passed the $2 trillion CARES Act, a response to the pandemic-related recession. Nearly 160 million stimulus checks were sent to individuals and families, but “nonresident aliens,” which the Internal Revenue Service defines as any individual who is neither a U.S. citizen nor a U.S. national, received no aid.

In the U.S., an estimated 10.5 million to 12 million immigrants who entered the country illegally are ineligible for federal aid.

Immigration advocates cite the essential labor that such communities have contributed during the pandemic. They note families with both individuals lacking proper documentation and legal permanent residents are among those who don’t receive federal aid. The Migration Policy Institute estimates about 15.4 million individuals in such households are ineligible for stimulus payments.

“Even if every member of a family is a natural-born U.S. citizen, if one person in the family is an undocumented worker who legally pays taxes, then the entire family is ineligible for the money from federal aid,” said Jack Norman, interim communications director for Voces de la Frontera, an immigrant rights group based in Milwaukee.

Norman emphasized the role immigrants play in Wisconsin’s economy, paying taxes, actively working and starting families and having children who are U.S. citizens.

“They don’t get money because ultimately it does come down to a form of racism that is implemented by the government in terms of its treatment of undocumented workers,” he said.

Vital services
Within the state, immigrant workers are concentrated in the manufacturing, health care, food services and agricultural industries, each of which has provided vital services during the pandemic. In 2018, immigrants accounted for 5% of Wisconsin’s total population and 6% of the state’s labor force, according to the American Immigration Council.

In Wisconsin, immigrants hold many labor-intensive jobs, which include semiconductor processors, assemblers and those moving freight, stock and materials by hand. Manufacturing ranks as one of the state’s largest industries.

“At the same time that undocumented workers pay taxes, they’re frozen out of so many things like unemployment, health insurance, in many cases, and they’re subject to retaliation at work if they take off sick,” Norman said. “They can’t complain because of the situation they’re in.”

Dave Gorak, executive director of the Midwest Coalition to Reduce Immigration, an “immigration-restriction” organization based in Wisconsin, agreed that immigrants contribute to the U.S. economy. But he said immigrant workers occupy jobs at the expense of Americans remaining unemployed. He agreed with the exclusion of millions of immigrants from the CARES Act.

Risks at work
Gumeta described the work environment that his mother and thousands of immigrant workers experience as dangerously unsafe since the beginning of the pandemic. Many workers haven’t been receiving personal protective equipment, and masks and social distancing aren’t being enforced, he said.

“My mom is still working pretty much shoulder-to-shoulder with people,” Gumeta said. “Some people are not wearing masks, or they have their masks down while they’re at work.”

In late April, there was a COVID-19 outbreak at JBS Packerland, a beef processing plant in Green Bay where nearly 300 workers were said to be infected. Organizers at Voces de la Frontera, where Norman works, helped advocate for workers at JBS and other nearby facilities. Norman said some of these workers shared with him a list of safety precautions that were not being enforced at the facilities.

According to Norman, workers at some of Wisconsin’s meatpacking facilities told him they were given face masks but during the workday masks would get “sopping wet” with sweat from all their movement. When employees asked for new masks, management wouldn’t provide any.

When asked what COVID-19 safety protocols JBS has in place, Cameron Bruett, head of the company’s corporate affairs, said through an email statement, “Our team members, visitors and applicants can receive and exchange masks throughout the day as needed. During break times, we have COVID Supervisors who hand out masks in the cafeteria for team members to exchange.”

Bruett also explained that personal protective equipment varies depending on an employee’s job, but that face coverings are required by everyone on all JBS Green Bay premises. According to Bruett, the company also requires all team members working on production floors to wear face shields.

Health care disparities
According to 2018 data from the state Department of Health Services, 93% of residents had health care insurance for the whole year, while 7% — about 402,000 — went without coverage for part or all of the year.

Gumeta’s family has no health insurance, as none of their employers offer it. As his mom continues to work in an environment that feels unsafe, Gumeta fears for his family’s health. He suffers from asthma and also lives with his elderly grandmother. Both are considered high risk for COVID-19.

Gumeta said his family lives paycheck to paycheck, and taking time off to protect themselves isn’t an option.
The Kaiser Family Foundation, a nonprofit organization focused on national health issues, estimated that nationally in 2018 about 23% of “lawfully present immigrants” and 45% of “undocumented immigrants” did not have health insurance coverage.
Help available
Still, some local health care providers are working to address their needs. In Dane County, the UW Health system and Access Community Health Centers encourage residents to seek health services regardless of their immigration status or ability to pay.

“We’ll make sure they go where they need care and nobody’s asking them to pay up front for anything,” Bidar said. “We will figure out on the back end what we need to do to make sure that their bills are covered.”

The Health and Economic Recovery Omnibus Emergency Solutions Act, which passed the House on June 23, would allow unauthorized immigrants without health insurance to qualify for no-cost testing, treatment and vaccines related to COVID-19, among other protections.

Additionally, part of the bill includes the COVID-19 Every Worker Protect Act, introduced by Sen. Tammy Baldwin, D-Madison, which would create enforceable safety standards by the Occupational Safety and Health Administration. Baldwin introduced the COVID-19 workplace protections in response to outbreaks of infections across Wisconsin’s meatpacking industry.

The bill has yet to be voted on in the Senate and won’t be debated until after the chamber returns from its July recess.