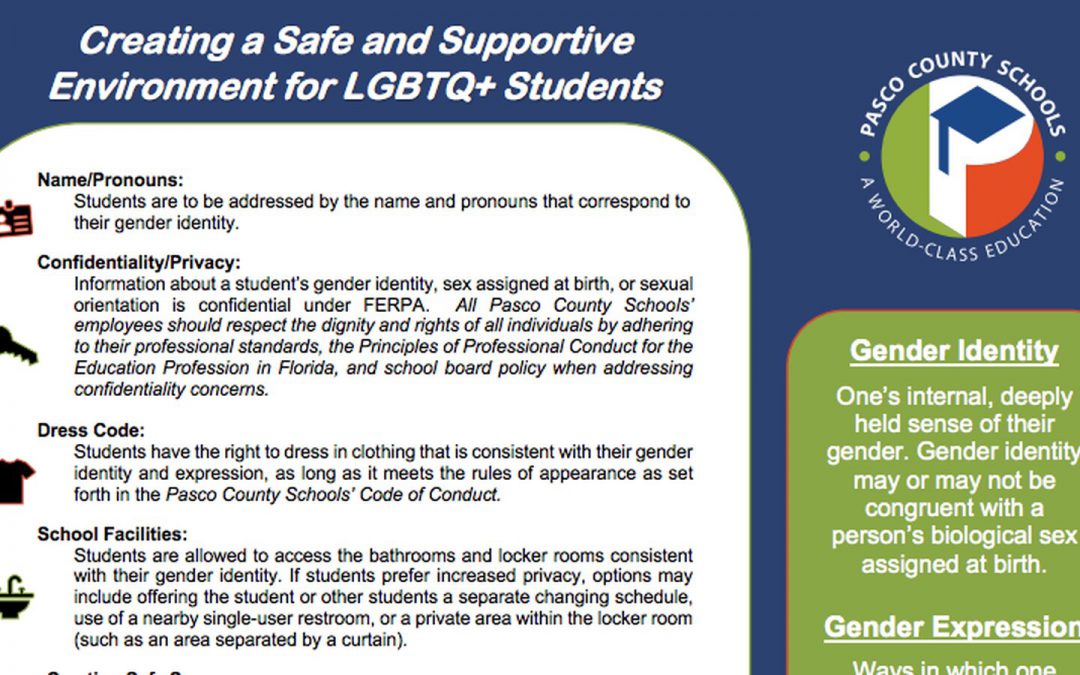 The Pasco County school district has adopted a one page guidance for employees to follow when dealing with LGBTQ students. It replaces a controversial 71-page document. [Photo Credit: Pasco County School District]

How to teach gender identity in schools — if at all — remains a conversation among community members and district administrators across the country. In Pasco County, an organization called Protect Pasco Children claims parents’ rights and family values are being violated by the school district’s LGBTQ policy, according to their website.

To gauge the consensus on gender teachings, the Heritage Foundation, a conservative research and educational institution, sent a survey conducted by Braun Research as part of their Education in America series to 1,001 parents and 566 school board members nationwide.

Of the school board members surveyed, 80 percent said they do not think schools should teach kindergarteners to “challenge gender stereotypes” or be provided with sexual activity instruction, including sexual orientation and gender identity. Similarly, two-thirds of the parents surveyed agreed.

When it comes to schools informing parents of their children’s gender identities, 70 percent of parents say they believe they should be informed “that their child identifies as transgender or has questions” about their gender identity.

Myndee Washington, founder of Safe Schools for All Students Pasco, associated with Pasco Pride, said unless a student is in harm’s way, teachers are not obligated to inform parents of their student’s gender questioning.

“If a female student comes to me and says, ‘I think I might like girls,’ there’s not a danger of them hurting themselves or anyone else,” Washington said. “Just like if a student came to me and said, ‘I’m thinking of becoming vegan,’ it would not require a phone call to the parents.”

Self-harm rates in LGBTQ youth are high, according to the Trevor Project’s National Survey on LGBTQ Youth Mental Health 2020. In the past 12 months, 48 percent of LGBTQ youth engaged in self-harm, and more than half of transgender and nonbinary youth seriously contemplated suicide.

At Pasco Middle School, teachers do not teach gender identity curriculum, according to assistant principal Angela Young. What they do, however, includes building trusting and supportive relationships with students.

“First and foremost, the student is our No. 1 priority. We do everything we can to protect their rights, safety and confidentiality,” Young said. “It’s important that we are aware and available to students and make sure they have somewhere to go.”

In the Heritage Foundation survey, parents answered with a 50/50 split when asked if the federal government should allow “unfettered access” to bathrooms, locker rooms and changing facilities based on students’ gender identities.

Pasco Middle School follows the district’s LGBTQ policy, which includes calling students by their preferred pronouns, creating safe spaces and allowing students to use bathrooms and locker rooms that align with their gender identity.

“People are people,” Young said. “The students are very supportive.”

When school is in session, administrators and teachers wear rainbow flag pins on their lanyards to symbolize they’re a trusted adult, someone students can feel comfortable talking to.

Safe Schools for All Students’ Washington wears the flag and said she had several students pop by just to say thank you for providing a supportive space.

“At school, we try to be their safe place, somewhere students can go that’s confidential — as long as it’s not a dangerous situation,” Young said.

“Students go to teachers for all types of issues, not just gender identity issues,” Young said. Whether students are learning virtually or face-to-face, Young said: “It’s just a matter of knowing they’re loved and cared for.”

Despite Protect Pasco Children’s ongoing efforts to end the district’s LGBTQ policies, Young said she has not received any pushback from the community.

“There won’t be academic learning if students aren’t emotionally there,” Young said. “We make sure we meet the needs of our staff and kids.”