China thinks it has found a way to surpass the U.S. military through AI, experts warn. 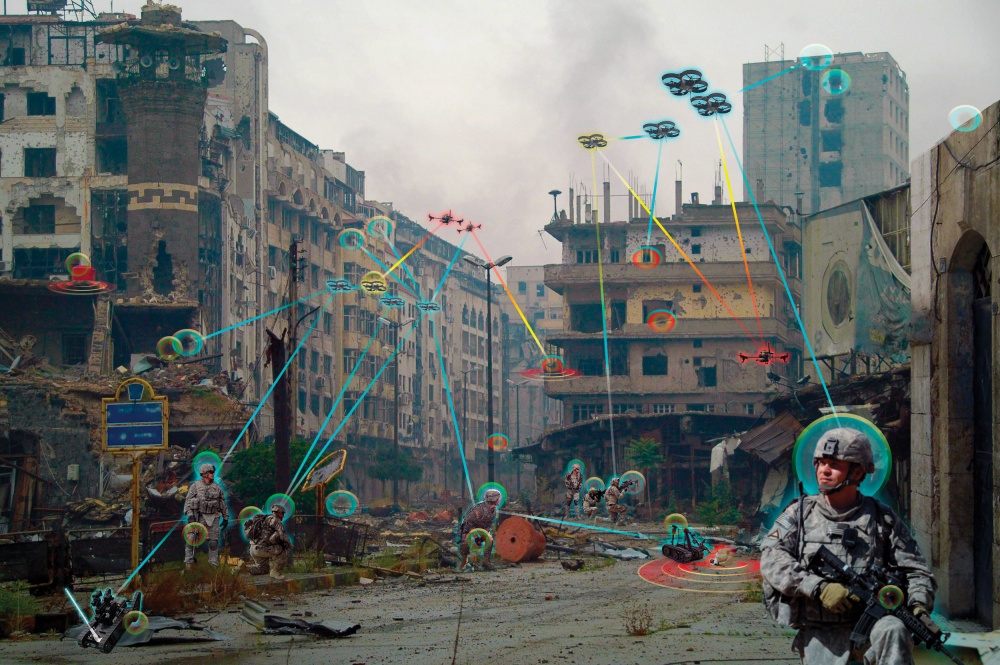 Visualization of AI in a combat zone, courtesy of the U.S. Army Acquisition Support Center

China is trying to “leapfrog” U.S. superpower strength through increased use of military artificial intelligence.

The U.S. and China have increased development of artificial intelligence capabilities for their militaries. But China’s 2017 New Generation Artificial Intelligence Development Plan identified AI as a “historic opportunity [for] leapfrog development.” A Center for a New American Security report found that China has embraced AI development as a critical component of national defense.

The U.S. military has the edge in artificial intelligence development now, but a recent RAND Corporation report found that the Pentagon’s current AI plan is not enough to maintain that edge over China indefinitely. The U.S. military largely reacts to new AI research instead of developing AI itself, and is too slow in integrating AI in its national defense strategy, Rand Waltzman, the lead author of the report, said.

In February 2019, President Donald Trump signed an executive order to promote AI research. Additionally, the DoD has tried to organize AI research into the Joint AI Center, and the Defense Advanced Research Projects Agency has many ongoing AI projects. However, many of these efforts emphasize commercial solutions to Pentagon problems, rather than AI development within the military itself.

The U.S. and China have very different goals with regards to AI development. The 2018 DoD AI Strategy highlighted using AI to predict maintenance for equipment and educating senior leaders as goals.

“War is evolving in form towards informationized warfare, and intelligent warfare is on the horizon,” the white paper said.

“I think the U.S. needs it more, actually, than China does.”

Since the Gulf War, China has been preparing to counter the current U.S. military dependence on a limited number of high-value investments like aircraft carriers or F-35s, Riikonen said.

“China says, ‘We’re going to fire a hypersonic missile, and it’s going to hit the carrier,‘ and then [America’s] like, ‘that’s it. We’re done,’” she said.

To maintain military superiority over China, the U.S. needs to fully commit to including AI as a core part of national defense strategy, she said.

One example would be Mosaic Warfare, a DARPA idea in which each aircraft, ground force or warship is considered part of a grand web with autonomous drones all sharing information to overwhelm an opponent from multiple sides.

“In the air domain, four F-16’s might be going head-to-head with four rival jet fighters. However, in a Mosaic Warfare context, the U.S. Air Force might also deploy four relatively inexpensive, some expendable unmanned aerial systems ahead,” said DARPA’s page on the idea.

Currently, the U.S. military has some advantage in AI development because it has access to a strong domestic semiconductor sector, required for building advanced drones and other AI projects, Waltzman said. However, China in recent years has been heavily investing in its semiconductor industry.

Additionally, China has an advantage in being able to force its top tech companies to work on military projects, Waltzman said. The Pentagon has had trouble getting U.S. tech giants to moonlight as defense contractors, he said. Notably, Google pulled out of a military AI development project after protests from 3,000 employees.

The U.S. doesn’t need to focus on novel AI advancements, Waltzman said. Academic institutions and companies in the U.S. and China regularly publish breakthrough AI research publicly, he said. A Pentagon AI initiative should focus on applying and testing that research in military contexts, he said.

“A competitive edge is not in the technology, but in applying it,” Waltzman said.