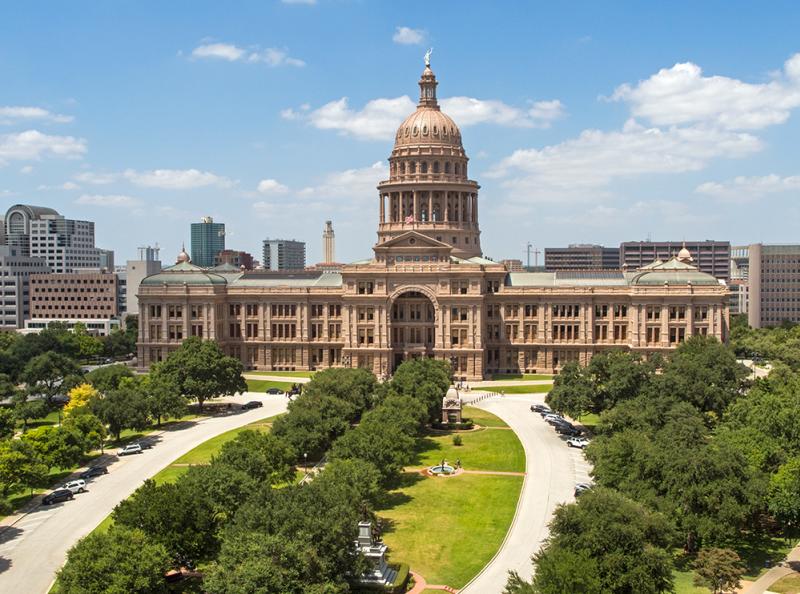 Advocates deplored the request by Texas Attorney General Ken Paxton and actions by the Department of Health and Human Services to remove religious discrimination and sexual orientation protections in the foster care system, saying the moves were politically motivated and not in the best interest of the state’s children.

In November 2019, the HHS issued a notice stating they would not enforce the department’s nondiscrimination policy. The Trump Administration also released a Notice of Proposed Rule Making saying that it would remove all protected categories that are not explicitly listed in a statute passed by Congress.

Paxton, a Republican, sent a letter to the HHS Administration for Children and Families in December 2018 requesting that the department repeal the nondiscrimination policy saying that it “…conflicts with Texas law, and infringes the religious freedom of foster care and adoption service providers.”

Paxton requested an exception for Texas and its providers if HHS chose to not change the policy. Medill News Service was referred to Paxton’s press releases upon requests for an interview.

HHS granted South Carolina an exception to the nondiscrimination policy in January 2019, making it the only state exempt from the policy thus far. However, the notice of nonenforcement currently allows all states to disregard the policy.

“I think these kinds of decisions and the discrimination issue are politically driven,” said John Sciamanna, vice president of public policy for Child Welfare League of America. “We think in giving such a high profile to this specific issue, they’re missing the more important issue, which is to try and strengthen families.”

Several organizations have sued HHS Secretary Alex Azar and the department over the notice of nonenforcement, referring to it as unconstitutional.

“They just issued a notice of nonenforcement saying we’re not going to enforce our regulations. You can’t do that,” said Julie Kruse, director of federal policy for Family Equality. “That’s not how you stop enforcing regulations, you have to change the regulation through the normal regulatory process.”

In a lawsuit Family Equality filed with two other organizations in the US District Court for the Southern District of New York, the plaintiffs wrote that HHS administers approximately $500 billion in grants.

“Those grants fund critically important programs that provide essential health and welfare services to millions of people around the country. Those people include some of the most vulnerable members of our society such as children in foster care, youth experiencing homelessness, and older people,” the suit states.

U.S. Representative Danny K. Davis, D-Ill., requested a report by the U.S. Government Accountability Office about why HHS decided to grant South Carolina an exception. The report detailed how different offices in the department contributed to the decision.

“I was in disagreement with the Department of Health and Human Services when they granted the waiver to South Carolina that would allow this agency to have discriminatory practices and still receive grants,” said Rep. Davis.

Rep. Davis is Chairman of the House Ways & Means Committee’s Worker & Family Support Subcommittee and has been referred to as a child welfare leader by advocacy organizations.

“I am personally against discrimination of any kind. The law of this land does not only suggest but it codifies that discrimination is against the rules,” Rep. Davis added. “And you shouldn’t receive a grant if you have discriminatory practices.”

The Texas Department of Family and Protective Services spent about $523 million in 2019 for its foster care programs, according to Patrick Crimmins, the department’s director of communications.

Crimmins said the state received $280 million of that funding from the federal government. The department then allocates funding to child welfare providers in order to serve the state’s children.

According to Jennifer Carr Allmon, executive director of the Texas Catholic Conference of Bishops, government funding provides 30 to 40 percent of the program’s costs and the churches provide the remainder.

But Allmon said the government allowing dioceses to operate programs is more important than providing funding.

“Foster care is a government system. You can’t engage in foster care without engaging with the government. And so in a lot of ways, it’s the engagement more than the funding that is at issue,” said Allmon.

The Catholic Conference of Bishops are leaders on this issue in Texas and played a role in the passage of HB 3859, which became effective on September 1, 2017.

The bill allows child welfare providers to refuse service to children, families, and foster and adoptive parents if doing so conflicts with the provider’s “sincerely held religious beliefs.”

Allmon said the bill’s purpose was to expand the network of providers available across the state.

“That’s why if any entity is unable to serve a family seeking to foster, they’re required to refer that family to another provider or back to the department. And the department is required to ensure that there are providers in every region available to serve every qualified parent,” said Allmon. “3859 actually improves the ability of parents to access the foster system because of that regional referral requirement that previously did not exist in law.”

But foster care advocates said the bill and HHS’ nationwide nonenforcement decision allows for LGBTQ couples, single parents and others to be turned away and is not in the best interest of children.

“The cardinal rule of child welfare is you have to act in the best interests of children,” said Kruse. “When you discriminate, you don’t do that.”

Megan Martin, executive vice president of the Center for the Study of Social Policy, claimed legislation like HB 3859 is bad due to the large number of kids in the foster care system nationwide. She referred to almost half a million kids being in foster care and approximately 125,000 children waiting to be adopted after their parents’ rights were terminated.

Martin added, “Research shows we’re fundamentally failing kids and our responsibility to serve when we limit the opportunities that they have. This happens particularly when we’re making those decisions based on our own ideological belief as opposed to making decisions in the best interest of kids, which is our responsibility in this field.”

While other states have passed legislation surrounding religious discrimination, Kruse with Family Equality said she views the Texas bill as the worst in the country.

“Texas allows forcible religious conversion. It’s not good for kids to hear the religion they were raised in is a bad religion and you need to change. So what’s going on in Texas is extremely, extremely concerning,” Kruse explained.

The advocates were particularly concerned about Texas’ LGBTQ youth since HB 3859 does not protect from discrimination on account of sex, sexual orientation, gender identity, or gender expression.

“The Texas bill explicitly allows conversion therapy for youth, which we know is extremely harmful. That’s a medically discredited practice attempting to change the sexual orientation or gender identity of a person,” said Kruse.

In a May 2020 report, the United Nations called for countries to ban conversion therapy, referring to it as cruel and inhumane. The report said the practice “may amount to torture.”

“We know that children suffer when the agency serving them has anti-LGBTQ policies, it affects the services provided to them and even affects their mental and behavioral health,” said Kruse.

In response to questions about Texas’s LGBTQ youth, Allmon said it may not be in the “best interest of the child” to be placed in a devout Catholic home.

Allmon emphasized that the Catholic Conference of Bishops and The Archdiocese of Galveston-Houston became involved in HB 3859 and Paxton’s current motions to increase the network of providers in the state in order to create a more diverse network.

The Archdiocese of Galveston-Houston did not respond to requests for comment.

“The vast majority of faith-based child welfare organizations do want to operate in the best interests of children and that includes working with diverse sets of parents for diverse children and reaching out and recruiting a diversity of families,” said Kruse.

The advocates also explained that faith-based agencies across the country have different opinions on the HHS nonenforcement notice.

“A lot of faith providers do not want this. Sometimes it can be created like they’re the faith providers who all want this and there’s the state and the sort of secular folks that don’t want it,” said Martin. “It sometimes looks like it’s a black and white problem and actually, it isn’t.”

Katie Olse, CEO of the Texas Alliance of Child and Family Services, shared that the organization doesn’t have a position on Paxton’s request. TACFS represents child, youth and family serving organizations across the state of Texas.

“Generally our comment on this topic is that we want to see a robust, full continuum of services for every child, youth and family involved in the child welfare system. We very much value the support and involvement of the faith-based community in serving children and youth. We acknowledge and are grateful that the system is well-supported by churches of all sizes and types around the State,” wrote Olse in an email.

On their own website, TACFS states that it does “not discriminate on the basis of race, color, religion, disability, nationality, sex, English proficiency, age, sexual orientation or gender identity.”

Crimmins said goals of the Texas Department of Family and Protective Services would remain the same if Paxton’s nondiscrimination waiver request were granted.

“We always seek the most appropriate placement for children in foster care, and that hasn’t changed,” wrote Crimmins in an email.

The foster care advocates disagree that Paxton’s request and the HHS nonenforcement of the discrimination policy wouldn’t affect the welfare of foster children.

“Because of the way it was structured, it basically allows a denial of best practices in terms of the children that we should be focusing on. Instead, it allows an agency to kind of superimpose their own kind of beliefs and placement decisions. So yeah, it’s problematic,” said Sciamanna about the HHS decision.

“It is extremely problematic when the federal government withdraws its support for 30% of the kids in foster care and says we’re not going to stand up for them anymore,” said Kruse about LGBTQ youth. “Luckily, there’s many states that have laws and policies protecting those kids. But there’s a lot that don’t. And so the kids in those states, including Texas, have basically had their rights to equal treatment crept away.”

Rep. Davis added that he thinks of the issue in terms of intent.

“It makes you wonder why a state would have a desire to allow individuals to operate in a way that is going to be unhelpful and could be harmful to very young people,” said Rep. Davis.

The HHS continues to not enforce its nondiscrimination policy. The lawsuits filed against the agency and Paxton’s request for a waiver remain pending.