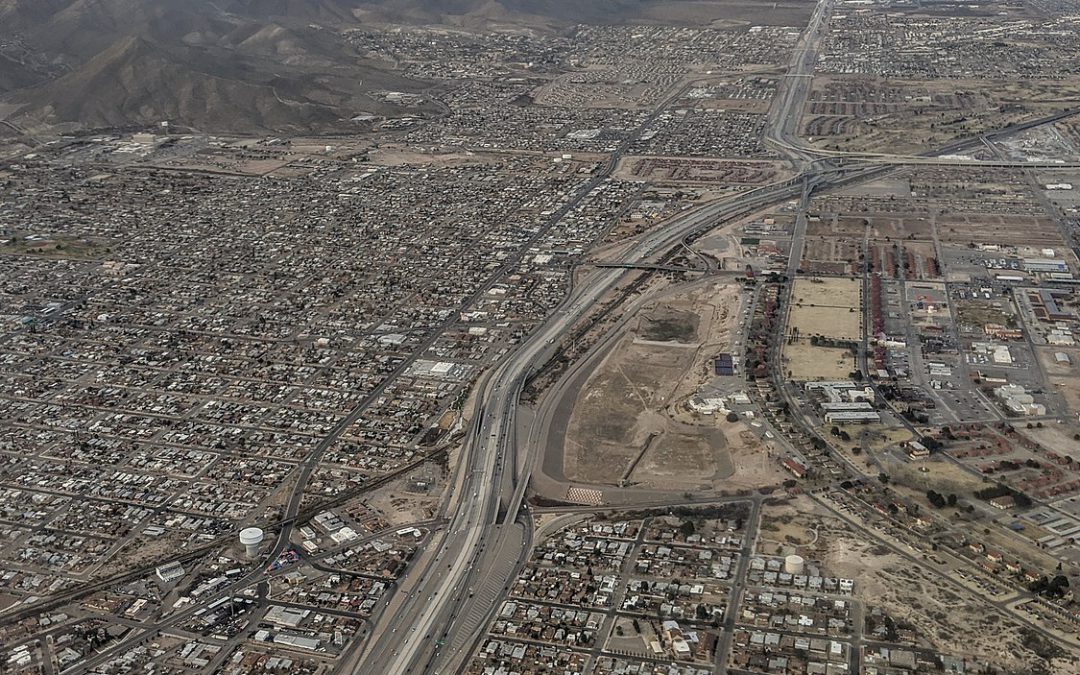 Aerial view from over the US–Mexico border in El Paso, Texas. Photo courtesy of Dicklyon/Wikimedia Commons

Over 400 counties across the U.S. are considered “persistent poverty,” having high poverty rates for decades.

Almost half of the 44 counties in Texas with persistent poverty are located along the U.S.-Mexico border and their high poverty rates and low wage employment are exacerbated by the significant numbers of immigrants without legal status who cannot leave the areas because they are stopped from moving beyond inland immigration checkpoints.

In El Paso, where the poverty rate is 21% immigrants without status constitute 11% of the county’s overall population, according to data from the Migration Policy Institute. The county is home to six U.S. border patrol checkpoints, regions where border agents routinely stop vehicles and ask occupants about their citizenship status.

While the checkpoints have been criticized by El Paso residents and immigrant rights groups for several concerns including claims of racial profiling, they also confine a number of those without legal status to the region. That has created a “revolving door” of poverty as employers often take advantage of being able to hire immigrant workers for disproportionately lower wages than areas not along the border, a border poverty expert said.

“Those checkpoints have long been part of the reason why you have these communities that are lower income,” said Melissa Lopez, an attorney and the executive director at the Diocesan Migrant and Refugee Services in El Paso. She believes immigrants without legal status are often “stuck” within Texas’ persistent poverty counties.

Added to this, Lopez said the county lacks incentives to encourage immigrant workers to stay and reinvest in the community if they’re able to legalize their status because they can seek higher pay jobs elsewhere.

“It’s kind of a self-perpetuating cycle,” Lopez said. “You have all these people who don’t have work authorization and so they’re not paid properly and then once they do have the opportunity to leave, they leave, because [in] other places they can do similar work for a lot more money.”

In 2019, U.S. Rep. James Clyburn, D-S.C., introduced a bill aimed at broadening the eligible regions that would be helped by the 10-20-30 formula, the current method for supporting counties with persistent poverty.

The formula requires federal agencies to spend at least 10% of funds in appropriations bills within persistent poverty counties. The bill, HR 2055, would expand the regions receiving funding to also include communities within high poverty census tracts, which are typically concentrated in more urban areas around the country and sometimes overlap with persistent poverty counties.

El Paso is one example of a region that has an overlapping persistent poverty county with high census poverty tracts.

William Shear, director on the Financial Markets and Community Investment team at the Government Accountability Office and who also led the agency’s report on persistent and high poverty regions across the country, said that a caveat to the 10-20-30 formula is that federal agencies, while required to spend at least 10% of their funds within persistent poverty counties nationwide, are not mandated to appropriate those funds to any specific county, meaning that some counties could receive little to no funding compared with others.

Even though Clyburn’s bill would expand the communities eligible to receive funding, the bill would not provide directives that would ensure federal funding would reach all persistent poverty counties and high-poverty census tracts.

Clyburn’s bill also does not specify how agencies should send funds to regions like El Paso that experience an overlap between the two. Shear said the GAO will be examining overlapping counties and census tracts experiencing poverty as a means to inform future legislation in another report it expects to produce next year.

The challenges impacting persistent poverty counties have been exacerbated by the ongoing economic crisis caused by COVID-19.

Cindy Ramos-Davidson, CEO of the El Paso Hispanic Chamber of Commerce, says the community could serve as a model for the rest of the country for immigrants’ success.
In El Paso alone, 648 business owners reached out to the Hispanic Chamber of Commerce for help with navigating the myriad of paperwork associated with federal loans and inquiries for complying with local and federal mandates amid the pandemic, Ramos-Davidson said.

According to data provided by the Centers for Disease Control and Prevention, the Latinx community accounts for 32% of positive COVID-19 cases in the U.S. and the largest number of positive cases of any minority group. Across the country, 59% of Latinx families reported job losses or pay cuts in this current recession, as compared with 43% of adults nationwide per data released in early August from the Pew Research Center.

“Many people within minority communities, such as Hispanic communities, are dependent on one or two people for the whole source of income,” Ramos-Davidson said. “When that income is gone, they have to then rely on somebody else. It’s very difficult.”

Pew data also shows that foreign-born workers have experienced a 19% drop in employment compared with 12% among their U.S.-born counterparts since the start of the pandemic.

Immigrants without legal work authorization or permanent status, if they can find a job, often work below the minimum wage.

Lopez said one possible solution to support immigrant communities within persistent poverty counties is to require the minimum wage be paid regardless of their immigration status, yet, she admitted that companies operating near the border that hire immigrants without work authorization may not survive the financial hit, nor does Washington have the appetite to raise the issue of the minimum wage to include all immigrant groups.

“I don’t know that in the current climate, that’s something like that would ever pass,” she said.

But according to Ramos-Davidson from the Hispanic Chamber of Commerce in El Paso, market forces may make a minimum wage possible in the county without having a federal mandate. With companies like Amazon building a distribution center in the county and paying $15 an hour, this sets a competitive rate for other businesses in the area to compete with, she said.

“Our world can’t survive without immigrants and it’s just unfortunate that people are very one-sided in this country and they don’t understand the dynamics of people,” Ramos-Davidson said.