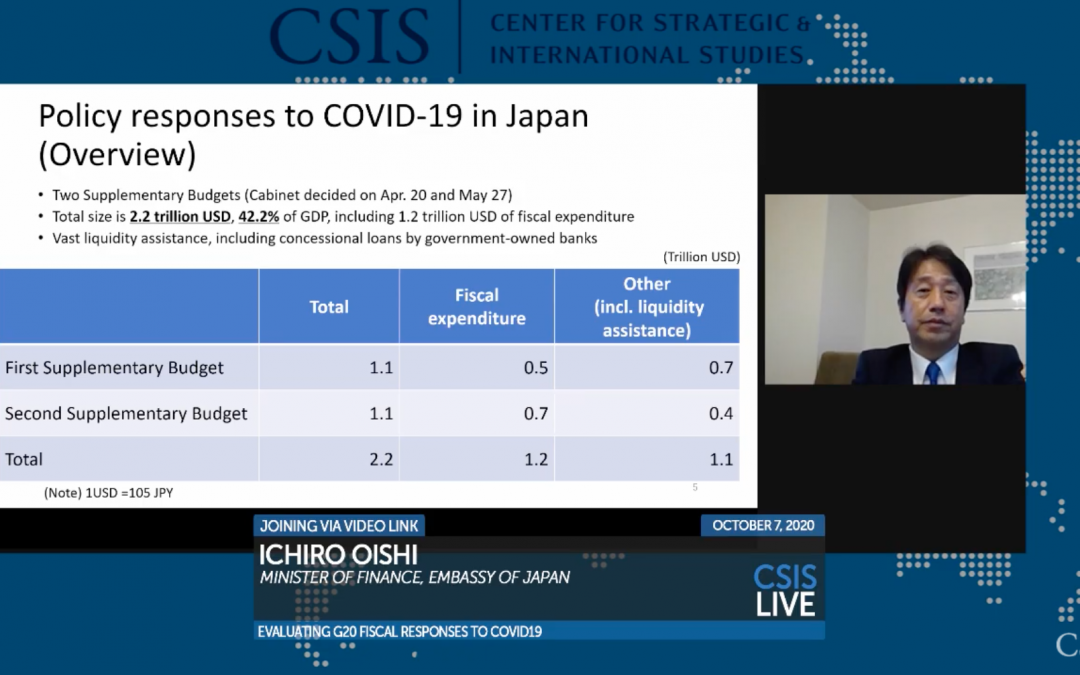 Ichiro Oishi, Minister of Finance at the Embassy of Japan in the U.S., explains Japan’s virus-response stimulus measures during Wednesday’s online discussion hosted by the Center for Strategic and International Studies (CSIS LIVE)

WASHINGTON – An increase in fiscal spending is necessary to respond to COVID-19, a panel of practitioners and experts from Japan, Germany, and the United States agreed at Wednesday’s online discussion hosted by the Center for Strategic and International Studies.

The remarks by financial experts from three of the four largest economies in the world stood at odds with President Donald Trump’s announcement on Tuesday to call an end to COVID-19 stimulus negotiations with the Democrats until after the Nov. 3 election.

Attendees included Ichiro Oishi, Minister of Finance of the Embassy of Japan, Joyce Chang, Chair of Global Research at J.P. Morgan and Holger Fabig of the German Federal Ministry of Finance.

Since the World Health Organization declared COVID-19 a pandemic, G20 countries have increased fiscal support to more than 11% of their collective gross domestic product, according to estimates provided by the CSIS Economics Program.

Japan’s Ichiro Oishi pointed out that $2.2 trillion worth of supplementary budgets passed by the cabinet in response to COVID-19 was “unprecedented” and amount to 42.2% of the country’s GDP. After delivering the world’s largest stimulus packages to businesses and individuals struggling from the pandemic, Japan is now pointing towards a V-shaped recovery, which is when a rapid economic decline is followed by a rapid economic increase.

Holger Fabig stressed, “every economist would know there is nothing left but fiscal policy” to keep businesses and households afloat. Germany is usually prudent in spending, but its fiscal investment against the pandemic is about 15% of GDP.

“Incomplete is the word to remember,” said Joyce Chang of J.P. Morgan, as she pointed out that the V-shaped recoveries in some financial markets are still not sufficient enough. J.P. Morgan estimates that by the end of 2021 the global GDP will be about 4% below the pre-pandemic level, implying a lower potential growth for the next decade.

To help the virus-battered economy, the U.S. passed the largest-ever $2 trillion stimulus package in March, far surpassing the $800 billion measure passed during the 2008 financial crisis.

Since then, the Federal Reserve Chair Jerome Powell has consistently urged Congress to put more money into the recovery to keep the economic rebound from faltering.