Cyclists and skateboarders hit D.C. streets for a night of Halloween-themed activism 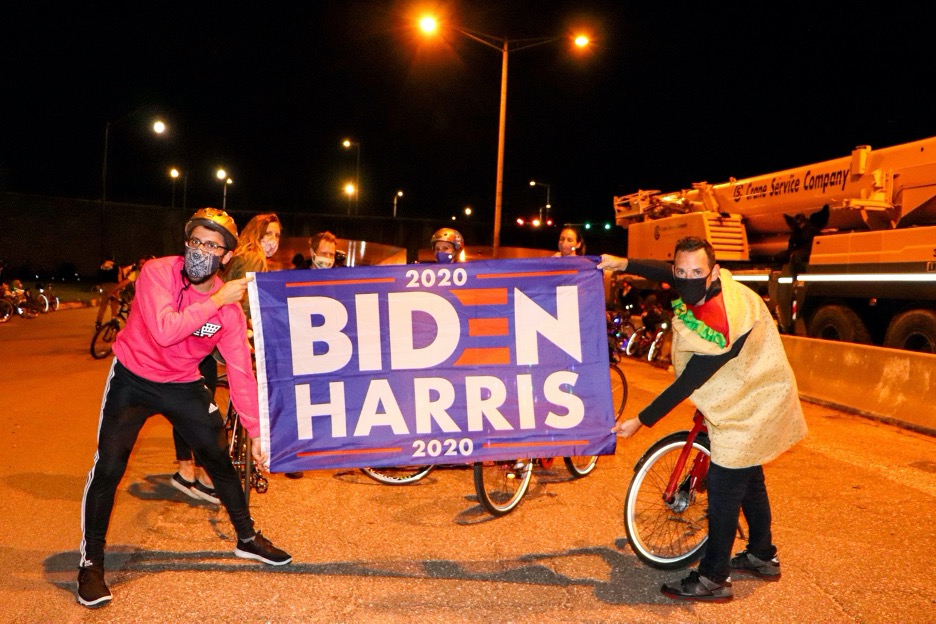 WASHINGTON — On Wednesday night, organizers from DC Bike Party, The Palm Collective, Extinction Rebellion DC and Shutdown DC took to the streets for a night of socially distanced, spooky fun.

Since 2012, DC Bike Party has been organizing creative monthly rides around the capitol. Emphasizing that the group is neither a race nor a riot, participants say they are simply devotees of the First Amendment right to peacefully assemble.

COVID-19 restrictions put their monthly meetups temporarily on hold. But with an estimated 200 cyclists, skaters and scooters in costume for Wednesday’s Halloween ride, it was a return to pre-pandemic crowd size.

The ride was planned and practiced ahead of time to ensure safety and accessibility. A map was posted to the organizations’ social media accounts so that curious participants could prepare for the long road ahead. Starting at DuPont Circle, the group made their way through several D.C. hotspots before finishing at the Museum of African American History.

Sean Breen, who planned Wednesday’s bike route, said that he purposely included attractions that were in some way important to the contemporary moment, like the Supreme Court, White House and Museum of African American History.

“The beauty of DC Bike Party — if you look around — is that there are groups doing all sorts of things,” Breen said. “It’s not just a bike ride, and it’s not just activism. It’s a community of people that want to share ideas.”

“We’re just giving you the ride, you choose what it’s for and how you want to do it,” Breen continued.

The organizations that helped orgnize the event occupy a unique space in D.C.’s social justice scene. Extinction Rebellion is an environmental justice organization, while the Palm Collective focuses on racial justice and Shutdown DC is more politically oriented. DCBP is a common ground for socially conscious cyclists.

After a three-hour ride with upbeat music, light-up bicycles and Party City’s entire costume section on their backs — cyclists enjoyed food and a well-earned rest outside the Museum of African American History.

With the election looming, continued racial justice protests and a climate crisis that shows no signs of slowing – it was a moment of reprieve and recollection for many activists in D.C.