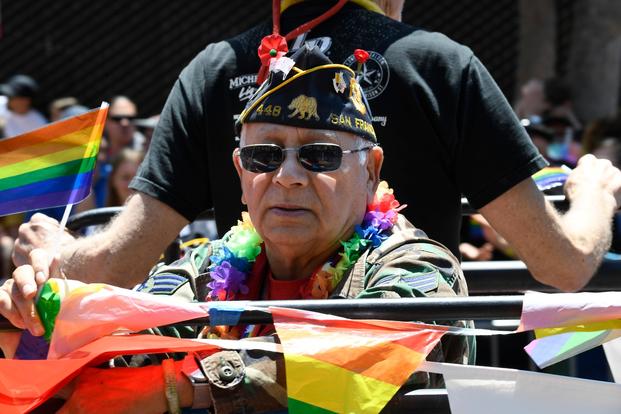 VHA is limited in its assessment of health outcomes for the LGBT veteran population because it does not consistently collect sexual orientation or self-identified gender identity. This can lead to insufficient medical care for LGBT veterans. (Photo by Arun Nevader/Getty Images)

The Department of Veteran Affairs can’t systematically analyze the health of LGBT veterans because it doesn’t consistently collect data on sexual orientation or self-identified gender identity, according to a recent report by the Government Accountability Office.

The VA’s Veterans Health Administration analyzes national-level data by birth sex to assess health outcomes for veterans. For example, it analyzes frequency data to identify their most common health conditions. However, VHA is limited in its assessment of health outcomes for the lesbian, gay, bisexual, and transgender veteran population because it does not consistently collect sexual orientation or self-identified gender identity—also known as SIGI—data.

VHA officials told the GAO that veteran health care providers may record veterans’ sexual orientation in nonstandardized clinical notes in electronic health records. However, without a standardized field, providers may not be consistently collecting these data, and VHA does not know the total number of these veterans in its system.

Until VHA is able to consistently collect this information, providers’ ability to deliver appropriate care may be affected, which could also hurt veterans’ health outcomes. For example, VHA researchers told the GAO that lesbian, gay, and bisexual veterans risk a higher likelihood of suicidal thoughts compared with their heterosexual peers. The researchers also said that without consistent sexual orientation data their work was limited to small, convenience samples.

As a system originally designed to serve mainly men, VHA has reported that it has previously struggled to provide sufficient sex-specific services and an environment of care sensitive to women’s privacy needs.

Jennifer Dane, a former Air Force intelligence analyst and the interim executive director of the Modern Military Association of America, a LGBTQ veteran rights advocacy organization, said a non-standardized documentation system puts LGBT veterans at risk from discrimination at the hands of providers.

Although the “don’t ask, don’t tell” military policy, which barred LGBT troops from publicly revealing their sexual orientation, was repealed by the Defense Department in 2010, VHA acknowledges that these veterans may still face barriers to equitable health care or experience stigma, prejudice, discrimination, and violence, which may affect the care they receive and their health outcomes.

Dane said that while there was a lot of room for improvement by the VHA, it has made some progress. In 2012, the VA created the LGBT Health Program, which provides policy recommendations, provider education programs, and clinical services to support personalized health care for LGBT veterans.

VHA policy notes that all people have both a gender identity and a sexual orientation. Furthermore, according to VHA, while LGBT individuals may share similar experiences of stigma and discrimination, those who are lesbian, gay, and bisexual may have different health concerns than those who are transgender. In 2017 and 2018, VHA issued updated directives on collecting data on veterans’ sexual orientation and SIGI.