NEW YORK — As the U.S. learned the news that Joe Biden will become its 46th president, thousands of Americans across the nation quickly took to the streets. In New York City, where the Democrat won more than 85% of the vote, thousands of voters flocked into Times Square to celebrate his victory.

Cristian Macario, 28, said that after the 2016 election, many young voters like himself went through a process of “reevaluating what our role as young brown people is in the electoral process, and finding out that we actually didn’t do that much.”

“For the last four years, myself, and many of my friends and loved ones have been organizing how they’re trying to get more involved, because they know our voice can make a difference,” Macario said. “And we’re so happy. And that’s why we have to be here to celebrate and come back to feeling at home, feeling like our country loves us, and that we are welcome here.” 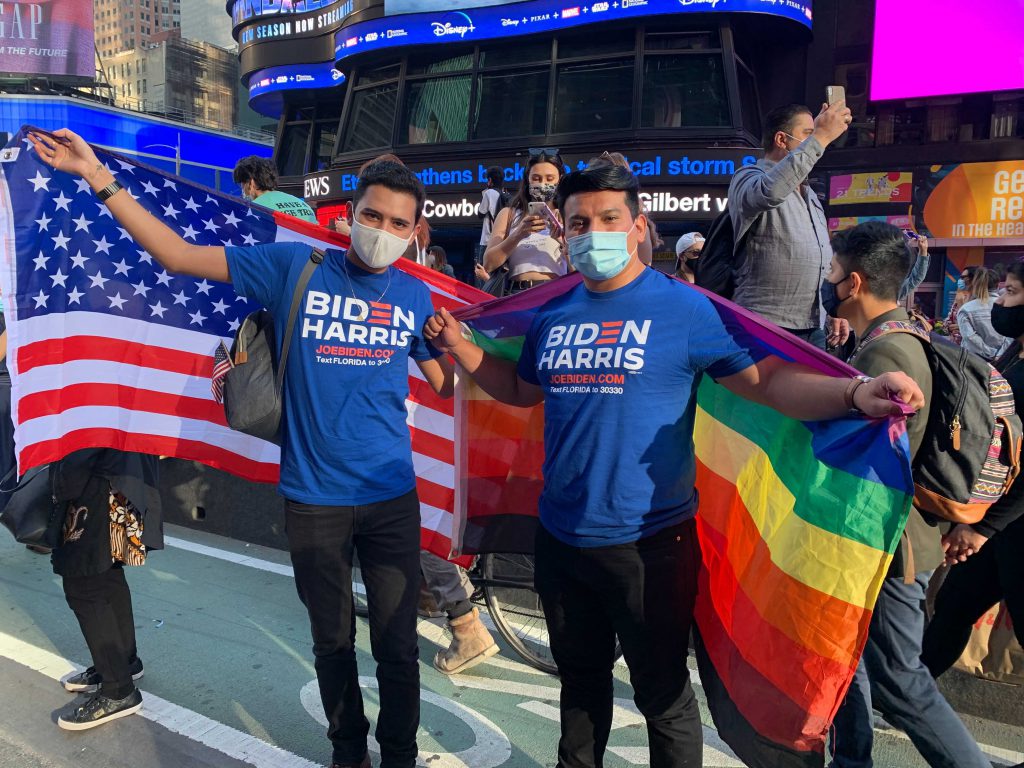 Gerard Giraldo, 28, said that the past four years have been “horrible and ridiculous.”

“The fact that Joe and Kamala (Harris) won the presidency … I thought there was no way I can stay home and do nothing,” Giraldo said. “You have to go off. You have to be on the streets and celebrate this moment.”

Giraldo’s friend Douglas Vasquez, 29, added that Biden’s victory was “definitely history in the making,” so that he could not afford to miss it.

“You could either stay at home, you can come down here and enjoy and be with the people and be with the voters themselves,” Vasquez said. “So, it’s definitely history for me.”

When asked about some of the most important issues they hope the next administration will address, many Latinos mentioned climate change as a pressing issue for younger generations. Jonathan Flores, 26, said that along with police brutality, climate change is the issue he is most worried about.

Vasquez agreed that “the environment is a huge deal,” but that he believes that now that “Joe and Kamala are in the office they are actually going to do something about it.”

Many young voters expressed hope for their generation. Macario said that not only will he be “100% out there celebrating in 2024,” but also that he is hopeful that by then even more young people will be .