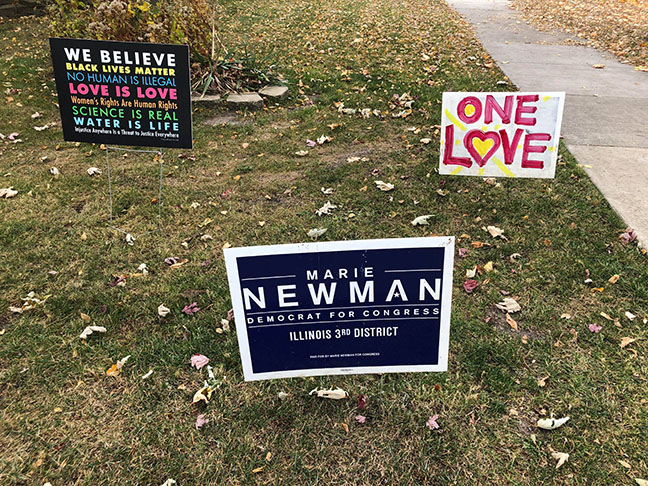 For 15 years, Democratic Rep. Dan Lipinski served the 3rd Congressional District of Illinois, an area with parts of Chicago and its southwest suburbs. Progressive Democrat Marie Newman, a resident of one of those suburbs, upset him in the primary and, on Election Day, sealed the deal when she beat Republican challenger Mike Fricilone, becoming the first woman to represent the district.

The Associated Press results showed Newman captured 53% of the district’s vote after leading for a majority of the evening on Nov. 3. When the election was finally called, Newman said she felt “incredible pride for this district and my team and volunteers.”

Despite her historic win becoming the first woman to represent IL-03, Newman said she hasn’t given much thought to what that first means. Instead, she’s focused on bringing COVID-19 relief to the district’s residents.

“I clearly have known for the last four years that if elected I would be the first woman (to represent IL-03),” said Newman. “But while it is important to … make that distinction, it is immaterial because the most important thing is that we deliver on services in an expedient and compassionate way.”

But Michelle Howe, a resident of Mount Greenwood in Chicago, said Newman’s election as the first woman to represent the district is inspiring for her and her daughter.

“As a woman with a daughter, representation matters,” Howe said. “As a woman who has been invested in politics, to be able to see someone like Marie put her beliefs out there, which are very different than those who are conservative, and win, it makes me hopeful for progress and change, especially when led by a woman.”

Newman ran in the 2018 midterm elections, along with 589 other women across the country, but lost to Lipinski in the primaries. While Newman received endorsements from the Chicago Sun-Times, mayors within the district and former President Barack Obama this year, campaigning through the COVID-19 pandemic presented challenges she hadn’t expected.

“In many ways, the third district (was) stuck in the past,” said Oak Lawn resident Christine Sheets. She added that seeing a woman finally represent her district in the same year the country elected its first female vice president will bring a focus on gender equality, particularly in Illinois.

“Illinois has a higher percentage of mothers who work outside the home than the national average,” Sheets said. “Marie and Kamala know what it’s like to make those hard choices when it comes to balancing a career against the needs of your children, your spouse, your parents …  I know that sending Marie to D.C. will improve life for all families.”

Newman’s campaign is known for its in-person canvassing, but under the restraints of the pandemic, the campaign had to change its strategy for reaching out to voters.

“The 2018 race was very different,” Newman said. “We (could) canvass to our hearts’ content, we could be out in the community to our hearts’ content. About five days before the (2020) primary election we learned that it was getting dangerous to have volunteers out so we made the strategic decision … to bring everybody in, which was a huge risk because it was our secret sauce. That’s what we did better than anyone else in the state of Illinois.”

Newman said she knew the decision to pull her canvassers from the field could potentially cost her the election. The campaign turned to phone banking, texting and social media to organize. And it worked, securing Newman the primaries and, eventually, the election.