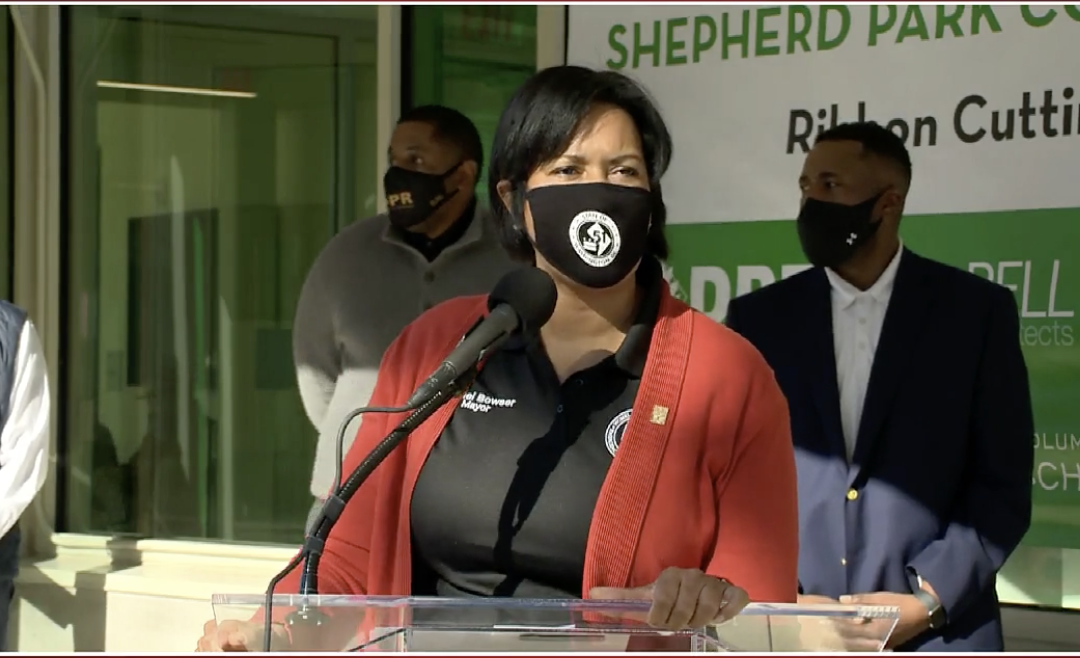 Mayor Bowser at her press conference on Tuesday. (Office of Mayor Muriel Bowser)

According to social media posts, a caravan of Trump supporters, which includes some Proud Boys members, originated in Texas on Monday and will arrive in Washington on Friday.

“I huddled with my team this morning about an additional report of a caravan that might be starting somewhere in the South culminating here,” Bowser said. “We continue to follow those activities and be prepared for those activities.”

“Our police chief will have a similar posture this weekend as he did last week. And we will be there to support peaceful exercise of First Amendment demonstrations.”

Bowser also noted that she would not repeal her recommendation that businesses dismantle any boarding or fences they put up in anticipation of election-related unrest.

The Proud Boys garnered widespread attention when President Donald Trump refused to condemn white supremacy during the first Presidential Debate on Sept. 29. Instead he told Proud Boys to, “stand back and stand by” while simultaneously blaming violence and unrest on the left wing.

Following the debate, Proud Boy members were seen celebrating the president’s comments in conservative online forums, like Parler, and saying they were prepared to “stand by.” The group is designated as a hate group by the Southern Poverty Law Center.

Amid Trump and other Republican officials refusing to acknowledge President-elect Joe Biden’s projected win, the current president’s supporters are planning to rally in Washington on Saturday. The rally, dubbed the Million Maga March, coincides with another demonstration from Trump’s supporters to “Stop the Steal.”

The president has alleged widespread voter fraud, and has filed lawsuits in key battleground states to challenge votes. On Tuesday, Secretary of State Mike Pompeo continued this rhetoric, claiming that the U.S. election had not yet been decided. He also alluded to a second term under the Trump administration.

“There will be a smooth transition to a second Trump administration,” Pompeo said to reporters during the briefing. “All right? We’re ready.”

Counter-protests have begun circulating on social media. A group known on Instagram as the Femme Anarcho Abolitionist Network (FAAN) posted a flier for a demonstration on Sunday with several local protest groups re-posting the message.

“We are fully aware that MAGA/Trump supporters are rallying this weekend in DC. As of the time of this post, they claim to want to rally in front of the DC Supreme Court @ NOON (location and time are subject to change). We are asking leftist communities and accomplices to come together to shut this rally/march down! Sore losers should exit gracefully,” the post said.

Concerns about protesters, namely the Proud Boys, carrying guns were raised during Bowser’s Tuesday press conference. She said that was a “police matter” and reminded reporters that open carry is illegal in D.C. but people can obtain a permit to carry concealed weapons.