Businesses in D.C. board up, adding ‘Black Lives Matter’ signs ahead of potential unrest in the city 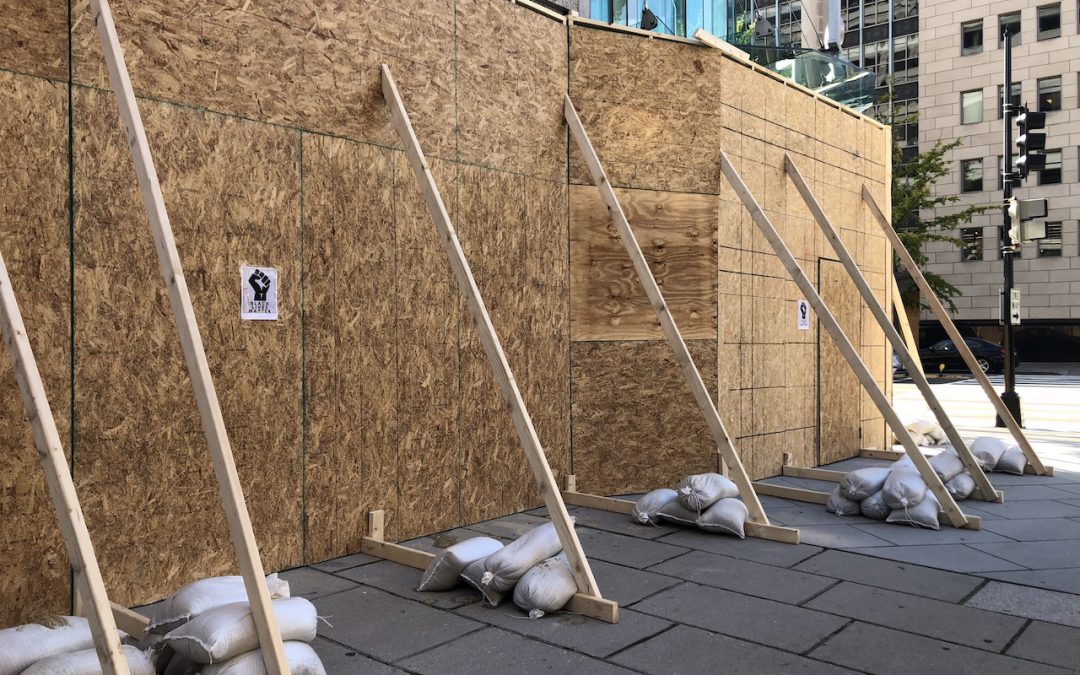 A business near the White House adds plywood board and BLM printouts to their storefront ahead of the election. (Madison Muller/MNS)

WASHINGTON — In anticipation of election-related unrest, businesses in Washington added security precautions, such as plywood boards and fencing, to their storefronts. Many businesses also added ‘Black Lives Matter’ signs, in what some see as an attempt to discourage vandalism.

“Mainstream media still tends to only show ‘looting and rioting’ and not the mutual aid or peaceful marches,” said Oyoma Asinor, who has been photographing Washington’s protests since May. “These businesses that are boarding up might think that by showing superficial support for the movement, it’s some kind of additional barrier of protection.”

Mayor Muriel Bowser (D) said during a press conference on Oct. 29 that D.C. was preparing to protect its people. But from whom, it was unclear.

“We also know that some people would like to cause mayhem or trouble,” Bowser said.

Chris Benson, a professor at Northwestern University’s Medill School of Journalism who studies the intersection between race, justice and media issues, said that the way the media is framing race and violence has added to confusion and fear.

“We are not doing enough to help the public understand these deep-seated anxieties,” Benson said. “We now see these misunderstandings around race and violence percolating up through the political system.”

Technically, the term “violence” does not apply to the destruction of property.https://t.co/7BAJBprCzl

Debate around the sloganeering of ‘defund the police’ – an idea that means reallocation of police budget to social programs – erupted in the House this week. After losing several seats, Democrats were divided about where to place blame. With some pointing to more progressive ideas, like defunding the police. Rep. Abigail Spanberger from Virginia, warned colleagues on a private call after the election that “no one should say ‘defund the police’ ever again.”

Rep. Jim Clyburn of South Carolina shared in the criticism. He said on CNN’s “State of the Union” that public support of the movement was eroded by messaging like ‘defund the police,’ likening it to ‘Burn, Baby, Burn’ a slogan used during the 1965 Watts civil unrest in Los Angeles.

“We lost the movement over that slogan,” he said.

Cities across the country have seen sustained demonstrations in the wake of George Floyd’s death. Protesters in Washington are still marching weekly for racial justice and against police brutality. While the majority have been peaceful, police escalated several confrontations by deploying tear gas, pepper spray and rubber bullets on protesters. These escalations prompted D.C. councilmembers to pass an emergency police reform bill in June.

Destruction on businesses occurred at the beginning of the summer’s protests. D.C. police said that on May 30 and May 31, 204 businesses were burglarized and 216 properties damaged.

Protests were reignited days before the election, after 20-year-old Karon Hylton-Brown was killed in Northwest Washington on Oct. 23. His moped collided with another vehicle while being pursued by police. The department’s policy prohibits officers from chasing vehicles for traffic violations. The week-long protests resulted in police tear gassing protesters – including Hylton-Brown’s mother – and damages such as broken windows and police vehicles.

But since Election Day unrest has largely been avoided.

Today, local protest groups in Washington have not called for the destruction of businesses. They focus on dismantling systemic racism, investing in resources for Black people and eradicating police brutality through direct action and education.

As supporters of Donald Trump plan to rally in Washington Saturday, including members of known white supremacist groups, Bowser emphasized that businesses should promptly remove plywood boards from their storefronts. As of Thursday, most were still boarded up.

Police Chief Peter Newsham told NBC on Thursday night that, “regardless of your issue if you want to come to D.C. we’re going to welcome you with open arms.”