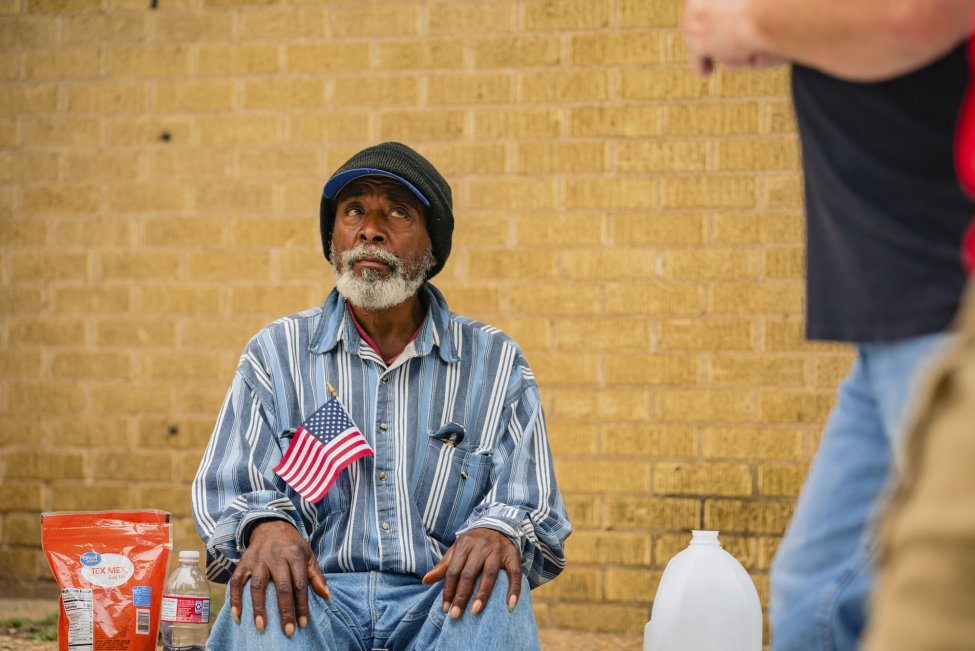 A homeless man holds an American flag near the Bank of Oklahoma Center in Tulsa, Okla., on June 20. File Photo by Kyle Rivas/UPI

WASHINGTON — The Department of Housing and Urban Development has issued less-stringent guidelines, due to COVID-19, for conducting an annual survey of the U.S. homeless population — a move some experts say means a more inaccurate count and less help for needy Americans.

During the Point-in-Time count held each January, the department coordinates with U.S. shelters and advocacy groups to get an idea of the homeless problem. The survey is the only comprehensive, national look each year at homeless size and demographics and will provide the only hard data showing this year’s impact of the coronavirus crisis.

“The data is important for us because it provides us with a consistent data point of what homelessness in our community looks like from one year to the next,” said Kristy Greenwalt, director of the D.C. Interagency Council on Homelessness.

Greenwalt added that although the survey is just one source cities and shelters use to estimate needs, the January count has historically been essential for understanding greater demographic changes that could lead to policy or strategy shifts — especially in areas with high populations of unsheltered homeless.

The department’s updated guidelines for the 2021 count, which normally includes both sheltered and unsheltered populations in odd-numbered years, will allow organizations to conduct less rigorous surveys that skip harder-to-gather requirements, use broader estimation tactics or opt out of the unsheltered portion of the count altogether.

The department has not yet formally announced the changes or responded to repeated requests for comments.

Weeks after quietly publishing the new guidelines to its website, the department scheduled a series of question-and-answer sessions for organizations that conduct the count — but has yet to make any public announcement or note potential effects on the survey’s accuracy.

In larger areas with more unsheltered homeless, the count demands a significant number of resources and volunteers who have been in short supply since the pandemic began. Mindful of these logistical issues, combined with fears of being exposed to the virus, some organizations have also discussed skipping the count this year. To ensure that some data will be collected, the department offered the new guidelines as a compromise.

“I think what HUD is trying to say is that if you can’t do the whole unsheltered count, here are some ways that you can reduce it, make it simpler and make it safer for people that are involved,” said Nan Roman, president of the National Alliance to End Homelessness.

Roman said the department has never before altered the requirements to this extent.

Even before the changes, some advocates criticized the PIT count for relying too heavily on figures for sheltered homeless and failing to get an adequate picture of unsheltered, or itinerant, homelessness. Critics of the survey say its methodology is based on a limited definition that fails to take into account millions of families who live in vehicles, on someone’s couch or simply out of sight — homeless that are harder to quantify.

Some estimates of the U.S. homeless population dwarf the department’s, although no two surveys use the same framework or methodology. In 2018, about 553,000 people were estimated to be homeless on any given night, according to the PIT count. That same year, the National Center for Homeless Education said federal data from the Department of Education found that more than 1.5 million students were homeless at some point during the academic year.

Experts say inaccurate data causes a lot of problems. Jurisdictions rely on the figures to plan resource distribution and budgets and to track changes over time.

“It’s just going to be really hard to understand the trend lines, because we’re going to have this year that’s just off,” Roman added. “And we’re not going to know if the trends are up or down.”

As a result, she said, organizations need to create a new “baseline” and “kind of reset to understand data moving forward.”

Advocacy groups are also worried about what could happen if the federal government doesn’t extend a national coronavirus-related moratorium on evictions. Congress passed the first ban with the CARES Act in March, and it was extended to last through the end of 2020 by federal health officials when lawmakers failed to agree on another relief package.

“What happens when the eviction moratorium is lifted if there is no federal aid package? There are not going to be local dollars to address that problem,” said Greenwalt. “We need Congress.”