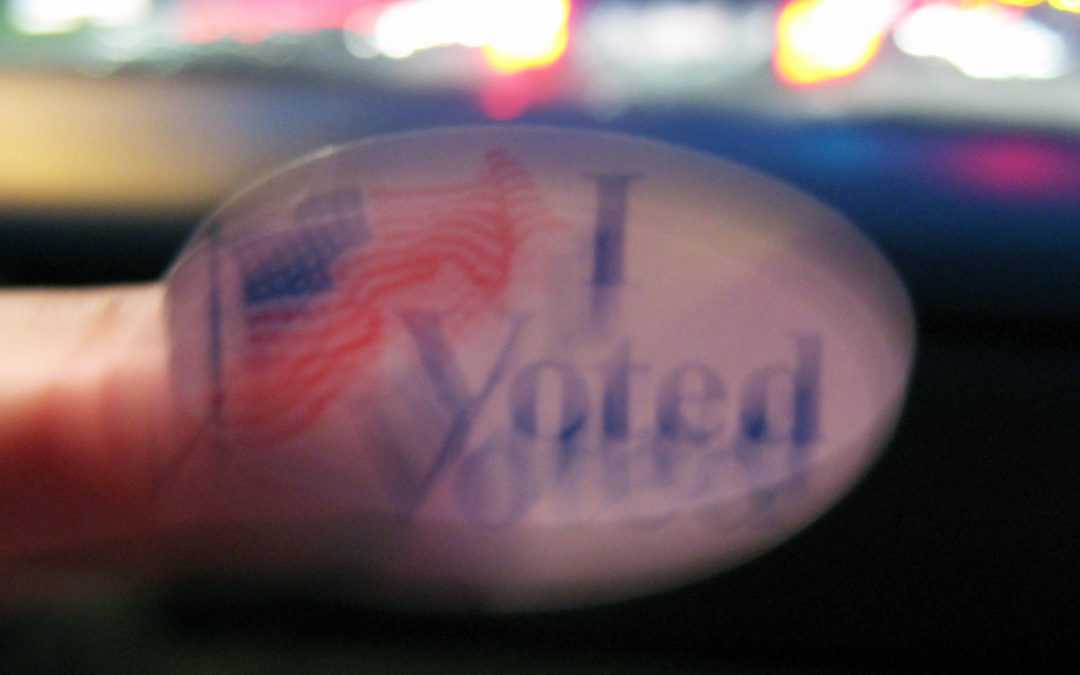 The 80 million Americans who didn’t vote in 2020 express deep-seated feelings of apathy and alienation from politics in the 2020 Medill School of Journalism/NPR/Ipsos survey. (Creative Commons 2.0)
Almost 160 million people voted in 2020, the most in any American election, according to the U.S. Election Project. With an effective turnout rate of 66.7%, about 80 million eligible voters did not cast ballots. In 2016, 60% of Americans voted, a drop from the 62% turnout in 2008 when Barack Obama became the first Black president but slightly above the 59% who voted in the 2012 election that gave Obama a second term.

WASHINGTON—Although more Americans voted in November’s presidential election than in any other in the last century, about one-third of eligible voters did not cast ballots—and, by a wider margin than in the past, it’s because they simply did not want to.

According to a Medill School of Journalism/NPR/Ipsos survey of 1,103 nonvoters and 740 voters conducted last month, nonvoters in 2020 feel more apathetic and politically alienated than in the past and unsure about what would motivate them to vote in the future. Voters express more hopelessness, too.

And as the percentage of nonvoters has narrowed to the smallest proportion in 120 years, the 80 million Americans who didn’t vote in 2020 have deep-seated reasons for not casting ballots, often rooted in apathy or even antipathy to politicians, the political process and the impact of government on their lives.

And the gap between nonvoters’ and voters’ views in these areas has widened since a similar Medill School of Journalism/Ipsos survey in 2012.

This year’s survey found that those who didn’t vote in the presidential election are more set in their belief that voting just doesn’t matter; Four out of five nonvoters polled last month said they made the choice not to vote. Only 18% said something prevented them from casting a ballot in 2020 compared with double that number in the 2012 survey.

Nonvoters also are more likely than voters to believe that politicians don’t care about people like them—and they may be right, according to some experts.

Nonvoters in California and South Carolina discuss why they sat out the 2020 election. (Amanda Rooker/MNS)

“I’ve heard every president in every election is always promising something different,” said 30-year-old Adrian Olmos, an unregistered nonvoter in Georgetown, Texas, who participated in this year’s survey. “But what I see is everything really stays the same, nothing ever changes, at least not for people like me or people I’m around.”

Only about one in five nonvoters said that something prevented them from voting in 2020, such as fear of exposure to COVID-19, having to work or confusion about the voting process, while over 80% said they simply chose to sit this one out. In the Medill/Ipsos survey of 2012, just 64% of nonvoters said they chose not to vote.

The majority of nonvoters – 70% – were not registered to vote in 2020, but only 29% of this year’s nonvoters surveyed said that not being registered was one of their main reasons for skipping the election. Other reasons for abstaining included a lack of interest in politics, the feeling that their vote wouldn’t make a difference or a general dislike for the candidates instead of any problems with the voting process itself.

Anna Rasmussen of Tacoma, Washington, another nonvoter who participated in the survey, said she didn’t agree with any of the candidates and had no options: She didn’t want to vote for a Democrat because she is anti-abortion, but “a lot of Republicans are anti-immigrant or anti-LGBTQ so I can’t vote for a lot of them.”

Nonvoters in 2020 were about three times as likely to think that “I’m only one person, so my vote doesn’t make a difference.”

Over half of nonvoters said they believed that who was elected president made no difference—more than double the number of voters who said the same. This is a much larger opinion gap than the one that existed between voters and nonvoters in 2012, hinting at a deeper level of apathy among 2020’s nonvoters.

The nonvoters of 2020 are alienated from the political process and isolated from active voters, creating a sort of echo chamber of apathy.

The survey showed that nonvoters tend to associate with other nonvoters, while voters socialize with other voters. Twenty-eight percent of nonvoters said that most of their friends voted in the 2020 election and 31% said most of their family voted compared with over 80% of voters.

In 2012, 38% of nonvoters said most of their friends and family voted, showing that this year’s nonvoters feel significantly more alienated from civic life today than they did in the past.

Just 17% of nonvoters said they discuss politics multiple times a week with their family compared to almost half of voters who do the same. A similar divide is seen in discussions with friends.

Many nonvoters interviewed after the survey said they saw little point in having conversations about politics.

“Me and my friends don’t talk about politics much because politicians have no idea what’s going on in our lives,” said 58-year-old Laura Ore, a survey participant from Asheville, North Carolina.

Nonvoters tend to consume news less frequently than voters. Fewer nonvoters than voters said they follow the news by watching TV, surfing the web or reading the news every day or several days a week.

Nonvoters’ sense of alienation extends to their thoughts on the federal government. Compared with about one-third of voters – 32%, almost half of nonvoters – 47% – said that what happens in Washington does not affect them personally.

“You go ask either one of the presidential candidates how much a gallon of milk is, and they won’t know,” said Ore. “They’re not going to be able to get food on the table for us.”

Visit Ipsos.com to read more about the survey findings here.

Americans are less hopeful overall, but nonvoters are especially fatalistic

Nonvoters and voters see eye to eye on many issues. The majority of all respondents strongly agree that the coronavirus pandemic is a serious problem for the country, there should be a third major political party and their personal economic situation is unlikely to improve in the next year.

Regardless of whether they voted, the survey shows that the majority of respondents – about three in four – do not believe that traditional parties or politicians care about “people like me.” A majority of both voters and nonvoters also agree that “the mainstream media is more interested in making money than telling the truth” and that the American economy is “rigged to advantage the rich and powerful.”

Both voters and nonvoters expressed less faith in the government overall.

“I feel like I’ve lost a lot of trust in our government, because even with a pandemic, they tell us one thing, and then a day later, they tell us another thing,” said nonvoter and ICU nurse Megan O’Malley from Sharpsville, Pennsylvania.

Even more striking, there is only a small difference in how voters and nonvoters see America’s future—and its mostly bleak.

And although more respondents from both groups thought that little could be done to encourage voting in 2020 when compared with 2012, the growth in fatalistic voting attitudes was most pronounced among nonvoters.

What would motivate a nonvoter to cast a ballot? “Nothing” was the top response—by a lot. One in three nonvoters now say that nothing could make people like them vote compared with one in 10 nonvoters in 2012.

What’s next for America’s 80 million nonvoters?

Most nonvoters chose not to cast a ballot in 2020. But whether because of feelings of apathy or alienation, experts say the consequences of not participating in the political process are the same.

When people don’t vote, politicians are less fearful of the consequences of not representing them, said the American Enterprise Institute’s Ornstein, author of “It’s Even Worse Than It Looks: How the American Constitutional System Collided with the New Politics of Extremism.”

But 66% of nonvoters agree with the statement that voting has little to do with how decisions are made in this country.

“We have to do a better job of explaining to people why their vote matters,” said J. Miles Coleman from the Center for Politics at the University of Virginia.

One reason it matters is differing demographics.

While nonvoters and voters share similar views on a number of issues, nonvoters are on average younger, less likely to be employed full-time or have a college degree and more likely to consider themselves politically independent. The survey showed that the majority of nonvoters are White, like the majority of voters, but a quarter are Hispanic—a significant difference from the 7% of voters who identify as Hispanic. People in groups that vote less are more likely to have their needs ignored by politicians, Ornstein and other experts said.

“There’s a belief that they’re just not going to vote,” Ornstein said. “It means that the representation at the table is less, and that they don’t get the same kind of focus as those groups that tend to turn out more.”