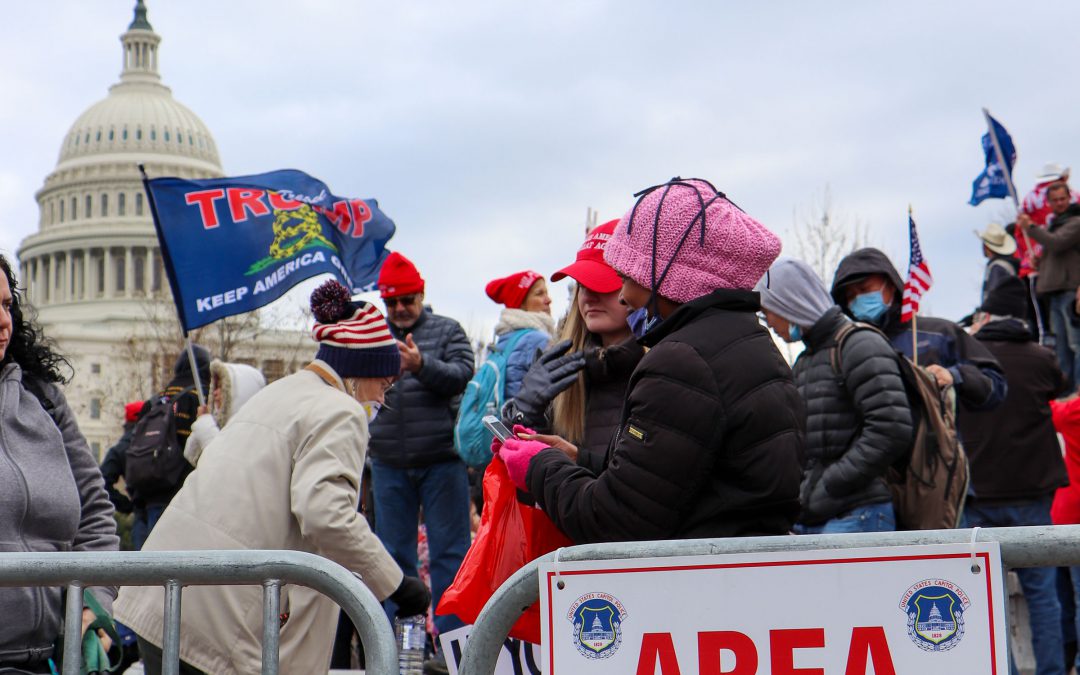 The Capitol was on lockdown Wednesday as MAGA supporters breached the building while lawmakers worked to certify Joe Biden as the next president. (Madison Muller/MNS)

WASHINGTON – Wisconsin Sen. Ron Johnson was one of 13 Republican lawmakers, led by Sens. Ted Cruz of Texas and Josh Hawley of Missouri, who supported an opposition to the Electoral College votes for President-elect Joe Biden on Wednesday.

On Nov. 7, Biden and Vice President-elect Kamala Harris were declared the winners of the 2020 Presidential Election with a landslide 306 electoral votes. 10 of those electoral votes came from Wisconsin, a win the Biden-Harris campaign earned by less than a percentage point over President Donald Trump.

Yet, many politicians — current and former — have called Johnson and his colleagues’ objection to the electoral college a threat to American democracy. In a statement on Sunday, former Speaker of the House Paul Ryan condemned the opposition, stating, “It is difficult to conceive of a more anti-democratic and anti-conservative act than a federal intervention to overturn the results of state-certified elections and disenfranchise millions of Americans.”

Meanwhile, in a tweet sent out on Sunday, Sen. Tammy Baldwin called the “false and dishonest” allegations of an unfair election in Wisconsin “attacks on the will of the people and our Democracy.”

David Canon, a professor of political science at the University of Wisconsin-Madison, said that because Hawley and Cruz are contenders for the 2024 presidential election, their opposition is intended to “lockdown” Trump’s base.

In Johnson’s case however, Canon said “from the perspective of political calculation, it doesn’t make sense.”

“Ron Johnson doesn’t have any presidential ambitions, Donald Trump is not that popular in Wisconsin, so … it really must come down to him really believing that the election was stolen from Donald Trump, which is just really hard to understand given that there’s no evidence that that actually happened.”

Despite the many Republicans that have spoken against the opposition, including Senate Majority Leader Mitch McConnell, Johnson and his colleagues’ refusal to certify Biden as the next president spoke volumes about the state of the Republican Party.

“This is fundamentally trying to overturn the wishes of the voters in the state,” said Canon. “In a democracy … the voters get to decide who their elected leaders are. Joe Biden won a decisive Electoral College win with the exact number of Electoral College votes that Donald Trump got four years ago. He carried the popular vote by seven million votes. And so, this was a clear and decisive win for Joe Biden. To pretend that it’s OK for Congress to try to overturn that result is fundamentally undemocratic.”

Canon added that there is no legal way for the opposition to overturn the election, but that the very fact that there remains an opposition indicates a deep divide within the Republican Party itself.

“About a week ago, (McConnell) had a meeting with the Republican senators,” said Canon. “Mitch McConnell urged and pleaded with them not to do this. He said that, ‘this is the most important vote that I’ve ever done in my time in the Senate, more important than the two votes to go to war, more important than the impeachment vote.’ Mitch McConnell … knew this was going to divide the Party exactly the way that is right now.”

But Johnson seems intent on opposing Biden’s certification simply to oppose the Democrats. Speaking to MSNBC’s Chuck Todd on Meet the Press on Sunday, Johnson pointed to the Democratic lawmakers and voters who refused to accept Trump as president for the last four years. Johnson added that there are “tens of millions of people that do not view this election result as legitimate.”

Some of those people lined the streets of D.C. on Wednesday.  At the same time Johnson and his fellow Republicans expressed their opposition on Capitol Hill, outside their offices Trump supporters — including the self-proclaimed “western chauvinists” group the Proud Boys — stood in the streets to declare their own objection.

The Proud Boys group had been planning to show up for more than a week. On Dec. 26, user @Noblebeard posted on the group’s main communication site, Parler, to “Come stand against the communist takeover of America!!!”

On Wednesday morning, @Noblebeard posted to his followers “Remember we are on the right side of history. They have stolen the election and are trying to steal your freedom next. The world looks to us as the beacon of hope and freedom, we can’t let them down.”

The reasoning behind the Proud Boys’ demonstration was mixed. While some posts on Parler indicate they were protesting the arrest of their leader, Enrique Tarrio, others indicated a deeper sense of anger toward the government in general.

User @biggdaddy posted on Tuesday that “They mean to silence us. They think cutting the head off of the snake will erode the strength of the body. They are wrong. All this does is solidify and magnify our resolve.”

While it’s unclear who the “they” is in the post, many of the Proud Boys are ardent Trump supporters who dislike the mainstream media and the Democratic party.

Ahead of Wednesday’s demonstrations, the D.C. National Guard was called in, as threats of violence were made and previous demonstrations with the same group resulted in an outbreak of violence. Businesses boarded up their windows and streets were closed.

As lawmakers began to present the votes, a recess was called almost immediately as protesters broke past the police lines outside the Capitol. The building was put on lockdown as a mob scaled the walls of the Capitol building and managed to find a way inside. Several lawmakers were evacuated as bomb threats were made and “suspicious packages” were reported around the building.

The Proud Boys official Parler account appeared to celebrate as the Senate chamber was nearly breached. Johnson asked all around the Capitol to “respect law enforcement and peacefully disperse.”

Rep. Mike Gallagher, however, was clearly agitated as he spoke on CNN from his office as the insurrection continued. Gallagher, who is a veteran, said he hadn’t “seen anything like this since I deployed to Iraq.”

Gallagher demanded that the president “call it off.”

“It’s over. The election is over,” Gallagher said. “It’s not gonna overturn the election and now we’re seeing the cost of it in real time. Call it off, Mr. President. We need you to call it off. This will be the first time in the last 4 years I’m encouraging him to tweet but (tweet) … ‘I support the peaceful transition of power.’”

Around 2 p.m., Johnson tweeted that he appreciated the service of the Capitol Police and “condemn(s) all lawless activity.”