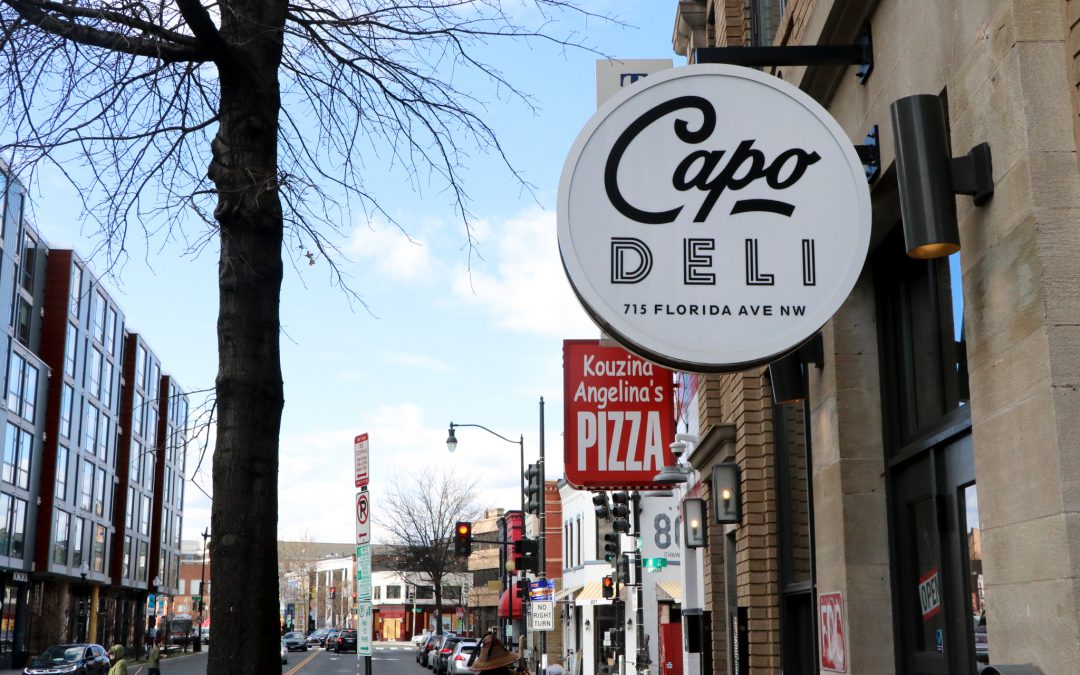 Whether Americans are hungry for change or just plain hungry, Capo Delicatessen, Immigrant Food and Ice Cream Jubilee are a few of the restaurants getting attention on social media for their inauguration-themed menu items. (Julia Benbrook / Medill News Service)

WASHINGTON — With the 2021 presidential inauguration approaching and much of the district in lockdown, some Washington restaurants are finding unique ways to market their products.

Whether Americans are hungry for change or just plain hungry, Capo Delicatessen, Immigrant Food and Ice Cream Jubilee are a few of the restaurants getting attention on social media for their inauguration-themed menu items. 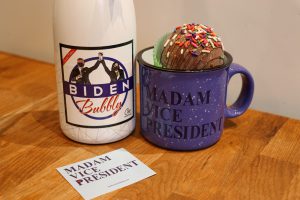 Behind the freezer door of an old-style Italian deli, Capo Delicatessen boasts an extravagant backroom speakeasy that hosts up to 150 people on its busiest nights. But during lockdown, the Shaw neighborhood restaurant could no longer rely on traditional bar sales for its revenue, which forced them to get creative with their drink distribution. They launched a series of themed drinks — the Tiger King, their famous Fauci Pouchy, the Pence Penicillin, the Pina Kamala and the Joe Imbiben.

“We are not looking to be like your political bar in D.C. It’s just that all the things that have happened this year are wild and we were trying to find the levity and the fun in the situation,” Natalie Flynn, marketing manager, said.

For inauguration week, the solution to boost drink sales was clear to bar strategist Rohit Malhotra: champagne. The Biden Bubbly, a 750 milliliter bottle, is sold in the restaurant’s custom-labeled red, white and blue bottle for $50.

“When they announced that Biden had won, champagne sales in the district skyrocketed,” Malhotra said.

The restaurant honored Vice President-elect Kamala Harris with the Harris Hot Chocolate. The $30 package contains a sprinkled milk chocolate cocoa ball and 2 ounces of a cocktail served in a ‘Madam Vice President’ mug created by the D.C. owned Bailiwick Clothing.

Malhotra added that social media has broadened their outreach outside of the district. Customers have driven over an hour just to pick-up their themed products. 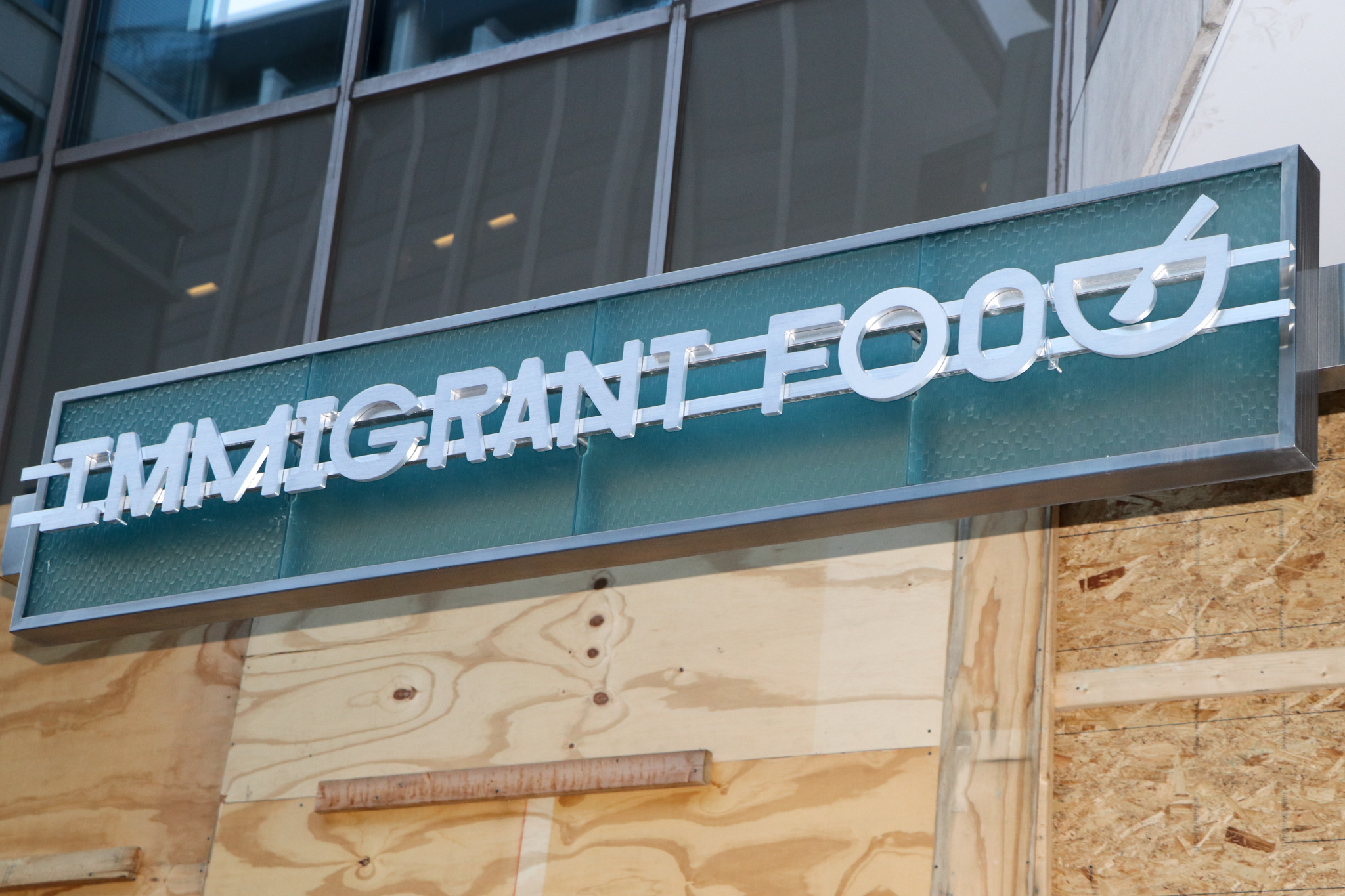 Immigrant Food is located near the White House. The restaurant is serving the Madam VP Heritage Bowl which combines Jamaican and Indian cuisines as a nod to her background. (Julia Benbrook / Medill News Service)

Immigrant Food, a fast-casual restaurant that specializes in fusion bowls, is located within walking distance of the White House.

Co-owner Peter Schechter said they purposely chose that location as a “sort of a symbolic message.”

Schechter said he wants to get people on Capitol Hill talking about how “important immigration and immigrants have been for the United States throughout the years.”

The restaurant’s mission reaches beyond the food of award-winning chef Enrique Limardo. Immigrant Food is also an advocacy platform for immigration. They publish a newsletter called “Think Table” that can be found on their website and provide work spaces for NGOs when they can.

Harris is the first daughter of immigrants to be elected vice president.

With inaugural preparations underway and barricades throughout downtown, customers must walk to the restaurant, but they are open for business. 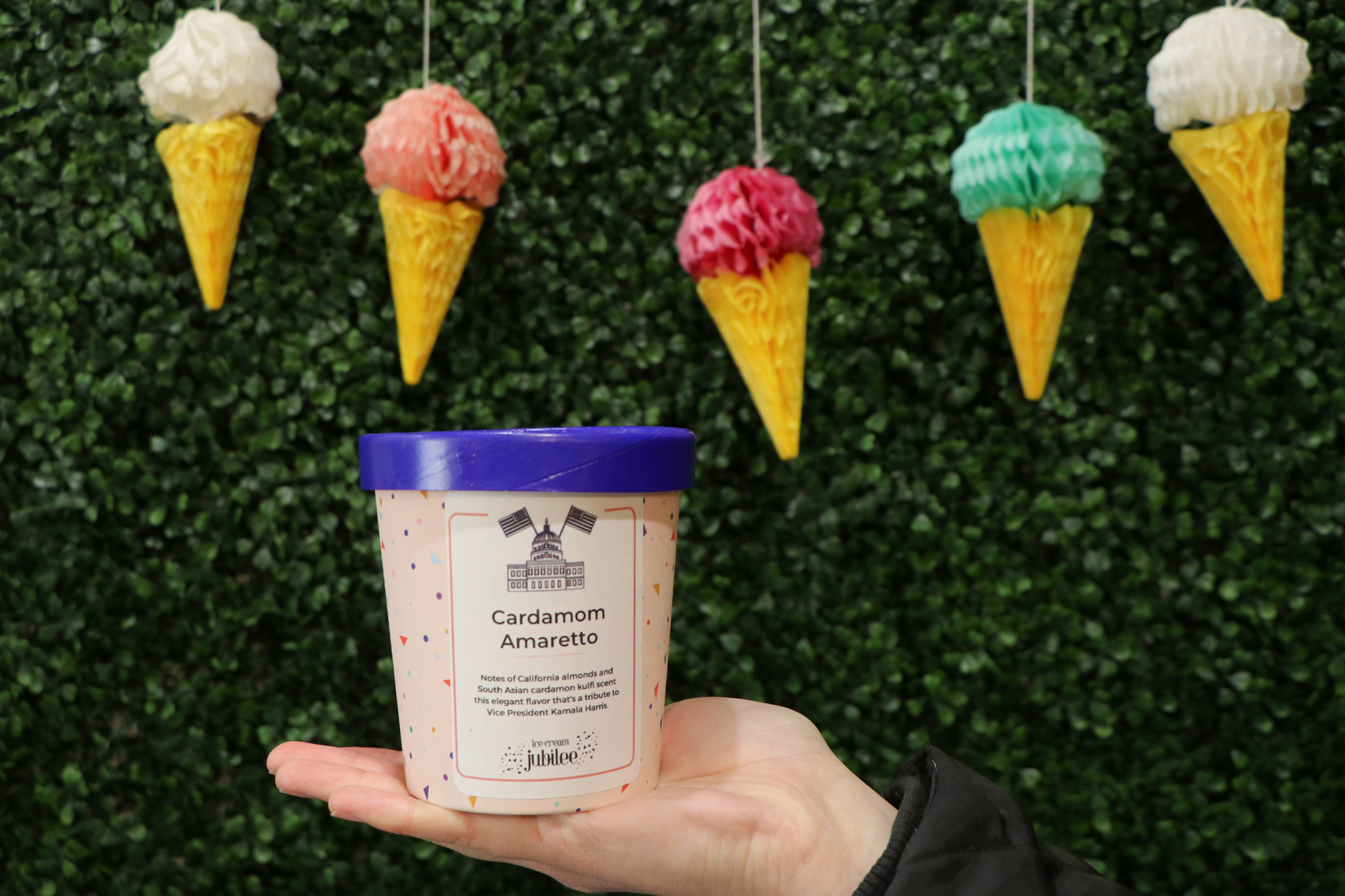 Cardamom Amaretto is one of the inauguration-themed flavors inspired by Vice President-elect Kamala Harris. Ice Cream Jubilee announced the will “donate a portion of ice cream proceeds to No Kid Hungry, a national non-profit dedicated to ensure free meals for kids in need.” (Julia Benbrook / Medill News Service)

Ice Cream Jubilee owner Victoria Lai has always been passionate about the memories that ice cream can help create.

She thinks Biden agrees. Lai called Biden a “famous ice cream lover” and credited an interview with his granddaughters as the inspiration for one of their four inauguration-themed flavors.

“So, when they were talking about their grandpa the first thing that they all had in common is that they had happy memories about sharing ice cream with their granddad,” Lai said.

The granddaughters noted that Biden’s favorite flavor was vanilla with chocolate chips. The description of their Biden-inspired vanilla chocolate chip reads in part, “Enjoy this classic flavor with extra chocolate sprinkles on top, just like Joe does!”

They also created Cuppa Joe with locally-roasted coffee beans which Lai said will give you the extra energy you may need in this next year.

Harris-themed flavors provide a nod to the next vice-president’s South Asian and California roots. Ice Cream Jubilee described their Cardamom Amaretto flavor as “reminiscent of South Asian kulfi” with “a nod to the California almonds of her home state.”

The final themed flavor is Rosé Mimosa, “It is Rosé and California Citrus and it’s the perfect flavor to toast to the new incoming administration. You can put a scoop or two into your bubbly cocktail or your champagne on Wednesday,” Lai said.

Customers can have all four flavors shipped nationwide with extra goodies included for $95. Ice Cream Jubilee has three locations in Washington.