All’s Quiet on the Inauguration Front 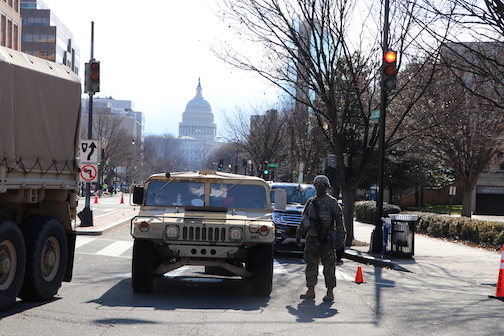 WASHINGTON — Among the at least 21,500 National Guard troops providing security for Wednesday’s inauguration was 1st Lt. Infantry Officer Joe Kerwin, who has served in the Army National Guard for nine years and is commander of a Pennsylvania unit that was deployed a few blocks from Pennsylvania Avenue.

“The Army National Guard, along with other elements of the Department of Defense are here today in Washington, D.C. to support a smooth transition of power, as well as support law enforcement agencies, federal agencies, state agencies, as well as agencies here in the District of Columbia to ensure that everybody’s safe, that will be attending the inauguration,” Kerwin said.

During his inauguration speech, President Joe Biden denounced recent violence and vowed to “confront” and “defeat” this “rise in political extremism, white supremacy, domestic terrorism.” Thousands of white nationalists stormed the Capitol on Jan. 6, rampaging through the building in a confrontation that results in the deaths of five people as part of an effort to stop certification of the election results.

Kerwin and his troops deployed from central Pennsylvania 10 days ago in preparation for the inauguration. He said that he did not notice any uptick in anxiety among the troops on the ground.

“Not for me. Everything that was expected to happen happened. Everything went smoothly and as planned,” Kerwin said. “I think that we’re well-trained for anything—any eventuality that may be thrown at us. My soldiers are doing well here today.”

In particular, Kerwin said that he was proud of his troops for “dropping everything at a moment’s notice” and coming to D.C..

Roads across the city were blocked by barriers and pedestrian traffic came nearly to a standstill on Inauguration Day as the National Guard members and law enforcement flanked streets and checkpoints across D.C..

Despite fears of violence, Biden’s inauguration proved to be a peaceful one.

Franklin Williams came from Muncie, Indiana for the inauguration. He was troubled by the Capitol breach and came to protest against the Proud Boys.

“Well, after seeing what happened on (Jan. 6) I decided I would come here and if there was any trouble,” Williams said. “I wanted to counterprotest against the Proud Boys and those people, but they didn’t show up.”

Williams felt that the National Guard succeeded in deterring violence around the inauguration.

“Once they said that all the National Guard would be here, I didn’t think there’d really be any trouble,” Williams said. “I’m just glad that everything went peaceful.”