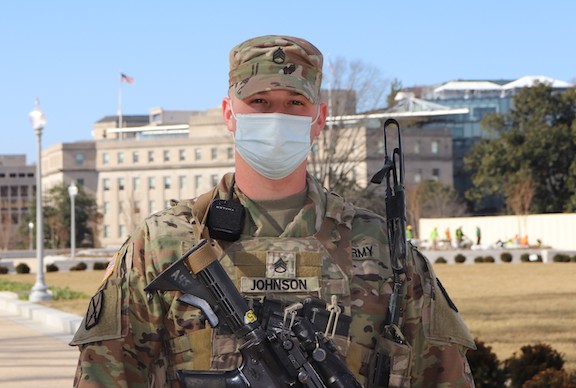 WASHINGTON – Members of Maryland Army National Guard’s Frederick-based Alpha Company say that their mission to ensure a peaceful transition of power for the inauguration of President Joe Biden was a success.

At least 800 members of the Maryland National Guard were on duty in Washington, including about 50 members of Alpha Company, part of the 1-175th Infantry regiment.

More than 26,000 National Guard members deployed to Washington to deliver “security, logistics and communications” support and “manage traffic in support of D.C. and federal officials for the inauguration,” the National Guard said.

Alpha Company worked in conjunction with local law enforcement and federal agencies to respond to any potential threats. They have been deployed in D.C. since the attack on the Capitol on Jan. 6.

“It’s all been a blur,” Spc. Hugo Gomez of Frederick said.

Capt. Michael Fedner, who grew up in Maryland, said that Alpha Company had “done a lot training” in advance to coordinate with local and federal agencies in preparation for the inauguration.

Inauguration Day was calm but not quiet. He said the day was filled with constant communication and radio chatter between the National Guard and other agencies.

“(Wednesday) was relatively calm and those guys from the 175th here, as well as all the other states and territories, they’re ready for anything,” Fedner said. “Luckily it was a very, very calm day and things went off without a hitch. … They all performed very well. They’re here until the job’s done, until they no longer need us.”

The Maryland troops remained in D.C. through at least Friday, and it wasn’t immediately clear when they were set to leave.
Staff Sgt. Trevor Johnson, of Frederick, said that Alpha Company helped local law enforcement by increasing their numbers and “augment[ing] security” on the ground.

Gov. Larry Hogan (R) echoed the National Guard’s mission ahead of the inauguration, saying in a press release, “Maryland will do everything we can to protect the transition of power, and we continue to work closely with allied law enforcement and federal partners to support the inauguration.”

Gomez noted the deployment was his first time at an inauguration and was “very, very grateful” that he could play a role.

Prior to deploying to D.C. for the inauguration, Gomez participated in COVID relief efforts as well as helping in COVID testing, which helped prepare him for his deployment to Washington.

“It got me used to helping out the community as best as I can, as a Maryland Guard soldier with food relief with aiding in the testing,” Gomez said. “[It] gave me the tools that I needed to take part of what’s going on with the with where we’re at right now.”

Fedner said that the insurrection at the Capitol on Jan. 6 that left five people dead, including Capitol Police officer Brian Sicknick, was a call to action.

“Everyone in America was very shocked with what they saw. We all signed up to serve, and we were happy to serve and support our country,” Fedner said.