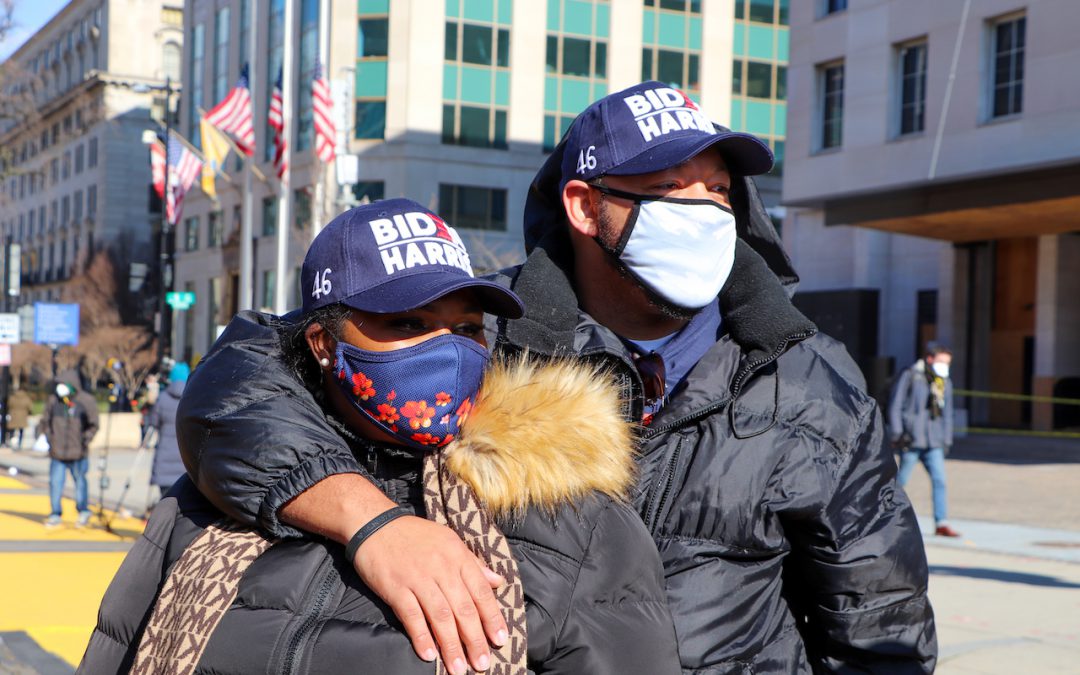 WASHINGTON – Inauguration Day 2021: a small crowd gathered behind the National Guard-enforced barricade on Black Lives Matter Plaza. Music blaring loudly from a speaker near the front of the crowd suddenly stopped and was replaced by a voice introducing, “Joe Biden, the 46th president of the United States of America.” The crowd roared with approval, cheering and clapping, but it soon fell quiet to listen as Biden addressed the country for the first time as president.

“Today, on this January day, my whole soul is in this: Bringing America together,” Biden said. “Uniting our people and uniting our nation. I ask every American to join me in this cause … With unity we can do great things.”

For many of those gathered at Black Lives Matter Plaza with the White House in sight, Biden’s swearing in was a symbol of a new chapter in American history and many are hopeful it will be one of peace and unity.

Houston resident Travis McGee said Biden’s inauguration is a step away from what he considered four years of “separation and division” and a step toward what the founding fathers envisioned.

“(It’s) going to be like the original forefathers decided this country is built on,” McGee said. “Bring your poor, your weak, bring everybody. That’s what America is about, is the people united.”

As the new administration sets out to tackle issues like the COVID-19 pandemic, climate change and systemic racism, bipartisan cooperation will be necessary, even with the Democratic majorities in the House and Senate.

But bipartisan cooperation may be hard to come by. Already some Senate Republicans are criticizing the new president for executive orders and one has filed articles of impeachment against him.

The Pew Research Center reported in 2016 that the country was experiencing “intense partisan division and animosity,” exacerbated by the 2016 presidential election. Over the last four years, that divide has only increased, and it was seen most clearly in the weeks leading up to Biden’s inauguration.

Encouraged by statements from former President Donald Trump, some Republican voters and lawmakers refused to accept the election results and claimed the election had been “stolen.”

On Jan. 6, multiple Republican senators and representatives objected to Biden’s certification, much to the anger of Democrats and even some of their own party members. And of course, the insurrection that took place in the middle of the proceedings, spurred on by Trump and other Republican officials, will never be forgotten.

But the insurrection of Jan. 6 highlighted the country’s division as politicians and voters alike sought to place blame.

An NPR/PBS NewsHour/Marist poll found that “58% said Trump is to blame either a “great deal” or a “good amount” for the violence at the Capitol, while 40% said “not much” or “not at all.”’ Eighty-two percent of Republicans said that Trump was not to be blamed for the violence.

In his inauguration speech, Biden acknowledged the difficulty of moving forward in a country divided, saying unity is “that most elusive of things in a democracy” in a country where the reality is that “racism, nativism, fear, and demonization have long torn us apart.”

Ariel Vegosen listened to Biden’s speech at BLM Plaza that day. She said hearing Biden speak was like the end of being in the “twilight zone.”

“(I’m) hoping for a new era in which there’s more love and light and more justice and more kindness and in which people take care of each other and in which our administration actually cares about the people,” Vegoesen said. “I’m just really hopeful for what’s on the horizon.”

Already Biden has taken steps toward combatting discrimination. On his first day in office, the new president signed 17 executive orders, including fortifying the Deferred Action for Childhood Arrivals plan and an end the Trump-era Muslim travel ban.

For Nadine Seiler, Biden’s promise of unity is a good one, but she said she hopes to see him take a stand against police brutality. Seiler is a dedicated Black Lives Matter supporter. At the Plaza on Inauguration Day, she held a black and white flag emblazoned with the words “Black Lives Matter.”

“I don’t know that I heard him talk about police reform,” Seiler said as she waved her flag. “If he was to do something for me as a Black person, I do think … he needs to work on police reform. (That’s) the priority to the Black community.”

On Tuesday, Biden signed another executive order in the name of racial justice, forbidding the Department of Justice from renewing contracts with private prisons. While Biden’s campaign had an extensive racial justice platform, it did not mention police reform.

Still, Seiler, like so many others gathered on the Plaza and around the country, said she finally felt like she could relax a little with Trump out of office.

“I can exhale after four years of this twilight zone,” she said. “I’m not expecting much, but I welcome the change. And hopefully we can move forward.”