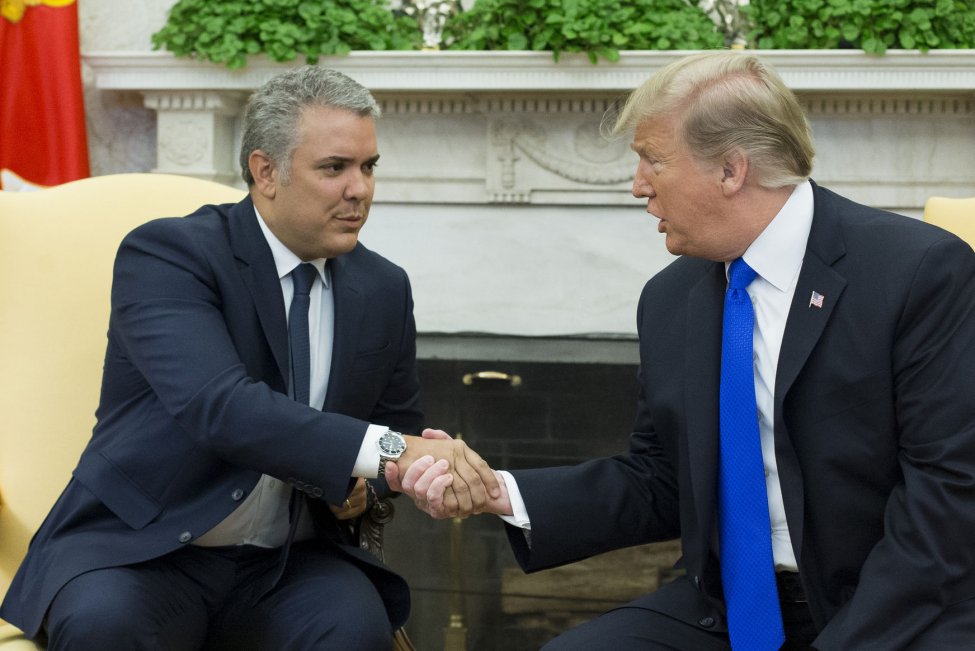 Then-U.S. President Donald Trump (R) meets with the President of Colombia Ivan Duque in the Oval Office of the White House in 2019. (Michael Reynolds/UPI)

WASHINGTON – Colombia is moving to legalize some 800,000 undocumented Venezuelan immigrants, offering them 10-year residence permits and access to formal employment and social benefits.

Over time, the Temporary Protection Statute could benefit up to 1.7 million Venezuelans in Colombia.

“As we take this historic and transcendental step for Latin America we hope other countries will follow our example,” Colombian President Iván Duque said in his Feb. 8 announcement. More than one-third of the nearly 5 million Venezuelans who have settled in other Latin American countries reside in Colombia. About 55% of them remain undocumented.

Duque’s announcement comes after former U.S. President Donald Trump‘s decision to halt the deportation of Venezuelans for 18 months. The executive order, signed by Trump on his last full day in office, is expected to benefit around 145,000 of the more than 400,000 Venezuelans living in the country.

Meanwhile, Democrats in the U.S. Senate continue to push for TPS for Venezuelans, which would offer the group more certainty while the situation in their home country remains unresolved.

Close allies, the Duque and Trump administrations had been for years at the forefront of the crackdown on the Nicolas Maduro regime. With President Joe Biden now in office, the alliance could change.

During the 2020 U.S. presidential campaign, Democrats criticized elected Colombian officials who were reportedly campaigning on behalf of Trump in South Florida. Democrats were “really frustrated that Duque’s team was even attempting to influence Florida politics through the large diaspora Colombians have in Florida,” said Brian Fonseca, a political science and international relations professor at Florida International University.

Duque’s decision to legalize hundreds of thousands of Venezuelans could signal to Biden that the Colombian leader is willing to cooperate on the humanitarian front.

Secretary of State Antony Blinken and Colombian Foreign Affairs Minister Claudia Blum met virtually on Jan. 29 to discuss the future of U.S.-Colombia relations. This marked the secretary of state’s second interaction with a Latin American government since his confirmation, after he spoke to his Mexican counterpart on his first day.

“We discussed Colombia’s effort in the attention to the Venezuelan migration and the importance of restoring democracy in Venezuela,” Blum said after the meeting.

As the Duque administration begins to develop a new Venezuela strategy alongside the Biden administration, some believe Trump’s decision was also an effort to thwart Biden’s campaign promise to “immediately grant” Venezuelan migrants TPS, said Diego Area, associate director for Venezuela at the Atlantic Council. To impede the Democrat from doing that, the former president followed the “I’m going to play this card before you do” approach, Area added.

Fonseca said the decision is also related to the fact that “you have some really important elections coming up in 2022.”

Fonseca notes that high-profile Republicans in South Florida, home to more than half of the Venezuelan diaspora in the United States, will be up for re-election, including Gov. Ron DeSantis and Sen. Marco Rubio. When Trump became the first world leader to recognize opposition leader Juan Guaidó as Venezuela’s interim president in January 2019, these politicians were “on the ground with the president when he was making that announcement,” he added.

“A lot of Trump’s policy on Venezuela has also been largely inspired by the Florida congressional delegation that has, as well as the governor, been working with the president in the White House on formulating that policy,” Fonseca said. “It has maybe a little to do with gratitude for 2020, but I think it’s really calculating 2022.”

Looking forward, Area said that although under Biden Venezuela policy in the hemisphere “definitely has changed” from a more assertive strategy to one that goes through multilateral organizations, “the nature of the political situation in Venezuela remains the same.” Even after the political situation in the country is solved, he said, it will take time for Venezuelan migrants to return to their homeland.

“The crisis is not going to change and is not going to go away soon,” Area said. “Even if the political actors and the international community [conduct] negotiations, and in one year let’s say everyone is happy…the time between this point until quality of life really starts to go up, you’re going to have more migrants during that period.”

Duque’s amnesty was received with criticism by some sectors of Colombian society. However, a 2020 study from the IZA Institute of Labor Economics on the impacts of Colombia’s version of the TPS program found that providing Venezuelan migrants with legal status and social benefits has had minimal impact on Colombian labor markets.

The study was conducted in the aftermath of then-Colombian President Juan Manuel Santos‘ decision to grant work permits to half a million undocumented Venezuelan immigrants in August 2018.