Haaland gets praise from Democrats, criticism from GOP in Interior secretary confirmation hearing 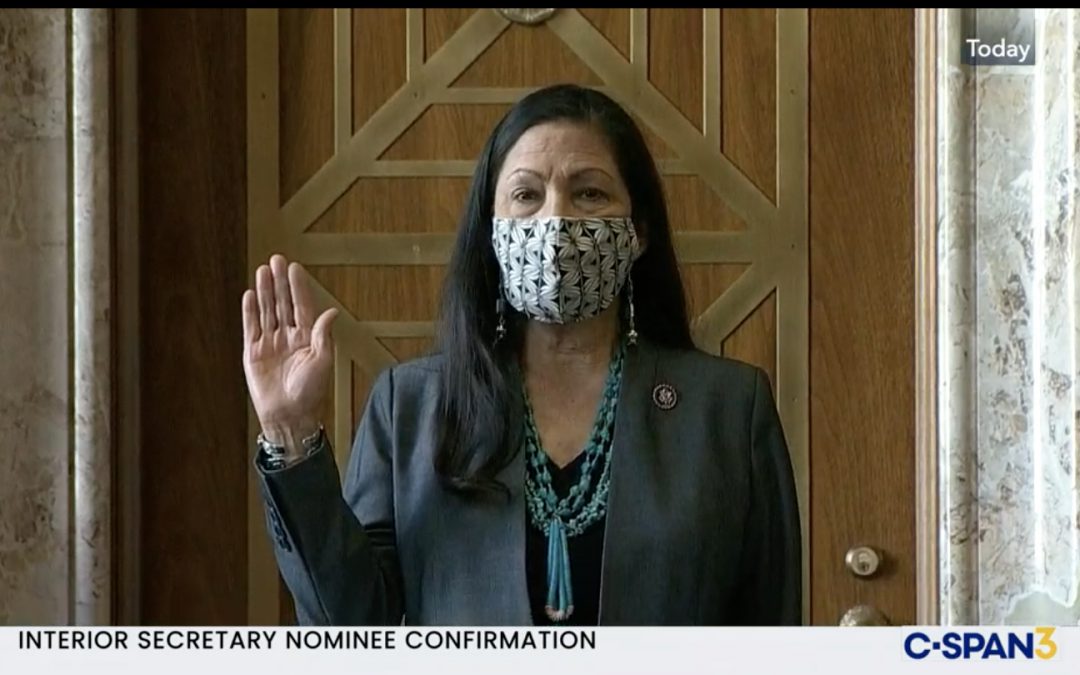 WASHINGTON – The first Native American to be nominated to the Cabinet, U.S. Rep. Deb Haaland, took her first step toward becoming Interior secretary while absorbing significant Republican criticism for her past contentious stances during the first day of her Senate confirmation hearing Tuesday.

“The historic nature of my confirmation is not lost on me, but I will say that it is not about me,” Haaland, a tribal citizen of Laguna Pueblo, said in her opening testimony to the Senate Committee on Energy and Natural Resources. “Rather, I hope this nomination would be an inspiration for all Americans – moving forward together as one nation and creating opportunities for all of us.”

As head the Department of Interior, she would oversee a sprawling executive agency that manages nearly one-fifth of the entire land area of the United States, include all of the national parks, and contains nearly 20% of the nation’s energy production.

The New Mexico congresswoman responded that the president’s pause on federal leasing was temporary and that fossil fuels play a role in the president’s energy platform, especially during the transition period to renewables.

Some Republican senators also criticized a few of Haaland’s past statements, such as a tweet that questioned Republicans’ belief in science and her previous support of the Green New Deal.

“I am concerned about proceeding with this nomination,” said Sen. Steve Daines, R-Mont., seated in front of a series of poster boards he brought with some quotes from Haaland that were critical of fossil fuels. “The track record and ideology in the past, I think, will perpetuate more divisiveness and will certainly harm Montana’s economy.”

Haaland repeatedly stated that she will implement Biden’s agenda, not her own. She also said that she has a track record of bipartisanship, pointing out that she introduced the most bills with at least one bipartisan co-sponsor among House freshmen in 2019. The Republican party’s longest-serving House member, Rep. Don Young of Alaska, introduced Haaland to the committee and praised her ability to work with him despite their disagreements on fossil fuel development.

Haaland, who began serving in the House in 2019, was a dark-horse candidate for secretary of the interior because of her inexperience as a federal politician. Many, however, saw her nomination as long overdue.

“We need someone that has that knowledge coming from her ancestors to come into a role where they can be an advocate for the environment, for our public lands, for our water, for our air,” said Carol Evans, chairwoman of the Spokane Tribe, in a phone interview. “And the Spokane Tribe fully supports her.”

If confirmed, Haaland would have jurisdiction over the Bureau of Indian Affairs, a key government agency that coordinates federal support to Native American tribes. The Bureau of Indian Affairs and Department of Interior have had a historically difficult and exploitative relationship with Native Americans, so activists hope that Haaland will amplify the voice and power of tribes.

“You had one of the greatest moments, I think, for the state of Washington when you led the final passage of the Spokane settlement bill – to see a Native American woman standing there on the House floor, helping us get something passed that took such a long time,” said Cantwell of the December bill that ensured federal compensation to the Spokane Tribe for damages caused by construction of the Grand Coulee Dam in the 1930s and ’40s.

Despite the groundbreaking nature of the nomination, Haaland will have a more difficult road to confirmation than some other Cabinet nominees who breezed through the process. In addition to stiff Republican opposition, moderate Democratic Sen. Joe Manchin, of West Virginia, where the coal industry remains a major employer, is still undecided. With a 50-50 split Senate, every vote counts for her confirmation.

Haaland may have to bank on winning the vote of some moderate lawmakers, like Sen. Lisa Murkowksi, R-Alaska, who have significant Native American populations in their home states, and the enthusiastic support of most Democratic senators.

“I think it would be outrageous if they (Republican senators) voted against her as some bloc,” said Sen. Martin Heinrich, D-N.M., after the hearing. “I think it would paint a very damning picture of the Republican Party if she had no support.”

The Senate Committee on Energy and Natural Resources will reconvene Wednesday morning to continue the Haaland confirmation hearing.