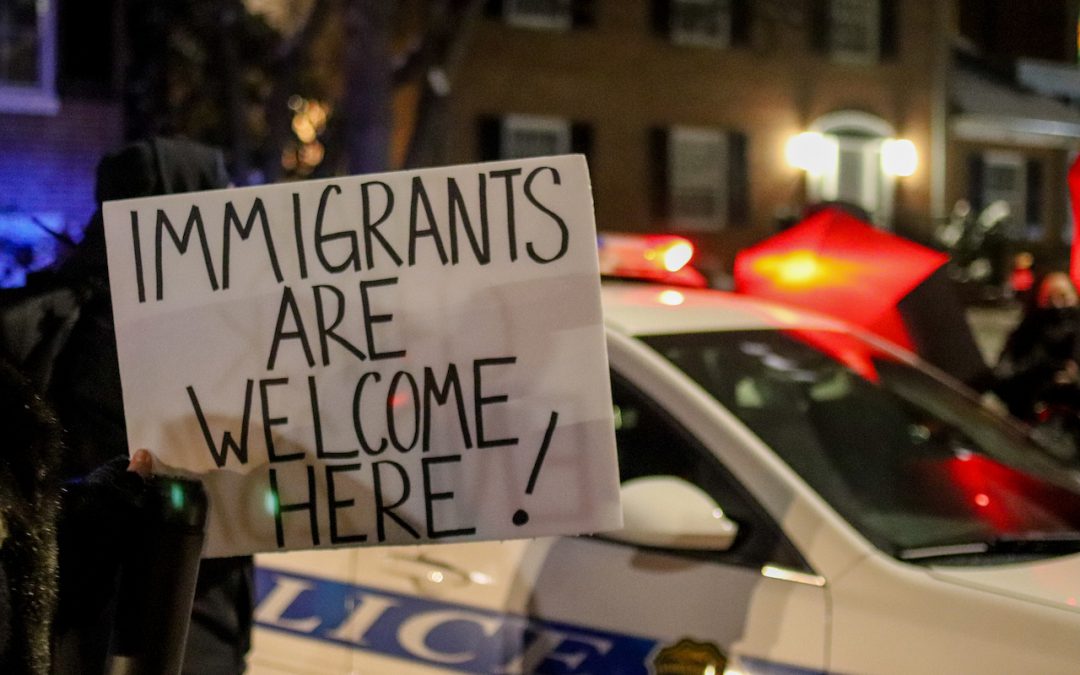 An activist in Frederick, Maryland holds a poster during a protest against am immigration policy known as 287(g) on Feb. 12, 2021. (Madison Muller/Medill News Service)

WASHINGTON — Over 70,000 immigrants were expelled at the Mexico border during the month of February, President Joe Biden‘s first full month in office, under a directive put in place by the Trump administration to target them as public health threats, according to new U.S. Customs and Border Protection data.

Biden has promised to reform the U.S. immigration system and has issued several executive orders aimed at solidifying a more humane approach.

On his first day in office, Biden directed the Department of Homeland Security to pause deportations of most undocumented immigrants for 100 days. The directive, which has since been blocked by U.S. District Judge Drew Tipton, an appointee of former President Donald Trump, was intended to allow the new administration time to review what Biden called “harmful and counterproductive immigration policies.”

But the number of expulsions under Title 42 has increased 12.2% from January and is at its highest in several months, according to data released Wednesday.

“We are committed to restoring our asylum system and building an improved system. At this time we don’t have a timeline on when our position and use of Title 42 will change,” the White House said in a statement to Medill News Service.

Title 42 gives federal health officials emergency powers to limit transmission of infectious disease, including the ability to limit immigration from countries that pose a risk to public health.

The Trump administration issued the order in March 2020 through the Centers for Disease Control and Protection, giving CBP the ability to expel any migrant at the border. Health officials have said there is no evidence that the order reduces transmission of COVID-19.

In April, Doctors for America and Physicians for Human Rights wrote a letter condemning the use of Title 42 to former CDC Director Robert Redfield. Over 800 people signed the letter, including top medical professionals.

“The decision to halt asylum processes ‘to protect the public health’ is not based on evidence or science,” the letter said. “This order directly endangers tens of thousands of lives and threatens to amplify dangerous anti-immigrant sentiment and xenophobia.”

There is no standard for determining the health risk posed by individuals attempting to cross the border. Advocates say risk determination is arbitrary and left up to the discretion of CBP agents.

Requiring asylum seekers to provide health documentation creates difficulties because most have traveled thousands of miles under dangerous conditions; paperwork tends not to be a primary concern.

“How can we say that it’s the immigrants at the southern border that are bringing in the virus, when the United States government has handled COVID-19 worse than just about every country in the world?” said Cynthia Garcia, the national campaign manager for community protection at United We Dream, which advocates for young undocumented immigrants.

While still working to mitigate the aftermath of his predecessor’s COVID-19 response, Biden must also navigate an immigration system that was, according to DHS Secretary Alejandro Mayorkas, “gutted” by the Trump administration.

Restructuring immigration policy requires a complicated regulatory process, one that relies on an uncooperative Congress and will inevitably face further legal challenges from more conservative lawmakers.

Biden has yet to nominate heads of CBP, Immigration and Customs Enforcement and Citizenship and Immigration Services. The Senate, after some delay, confirmed Attorney General nominee Merrick Garland on Wednesday. Garland will oversee the hiring of Justice Department officials responsible for overturning Trump-era immigration policies.

But immigration advocacy groups say that Biden could take a big step toward restoring faith in the U.S. immigration system by ending the use of Title 42.

Olivares said in an interview that while Biden may not be politically motivated by the same factors as Trump, “political backlash” from members of the Republican Party and anti-immigrant rhetoric from the right wing has made Biden hesitant to pursue aggressive immigration reform.

Biden has said that his immigration policies will prioritize asylum seekers and will work to discourage family separation. In a statement to Medill, the White House noted unaccompanied minors would not be expelled under Title 42.

But according to advocacy groups, this might unintentionally encourage family separation.

Witness at the Border, a group that tracks expulsion and deportation data, reported that CBP encounters with unaccompanied minors in January increased 17% from the same month last year.

“For immigrant families, they’ve made this arduous journey and somehow gotten to the border. Now they have Title 42 looking at them,” said Tom Cartwright, a member of Witness at the Border’s leadership team. “They have the option of turning around or having their child cross the border for a chance at asylum, in the hopes that, at some point, they’ll be able to reunite.”