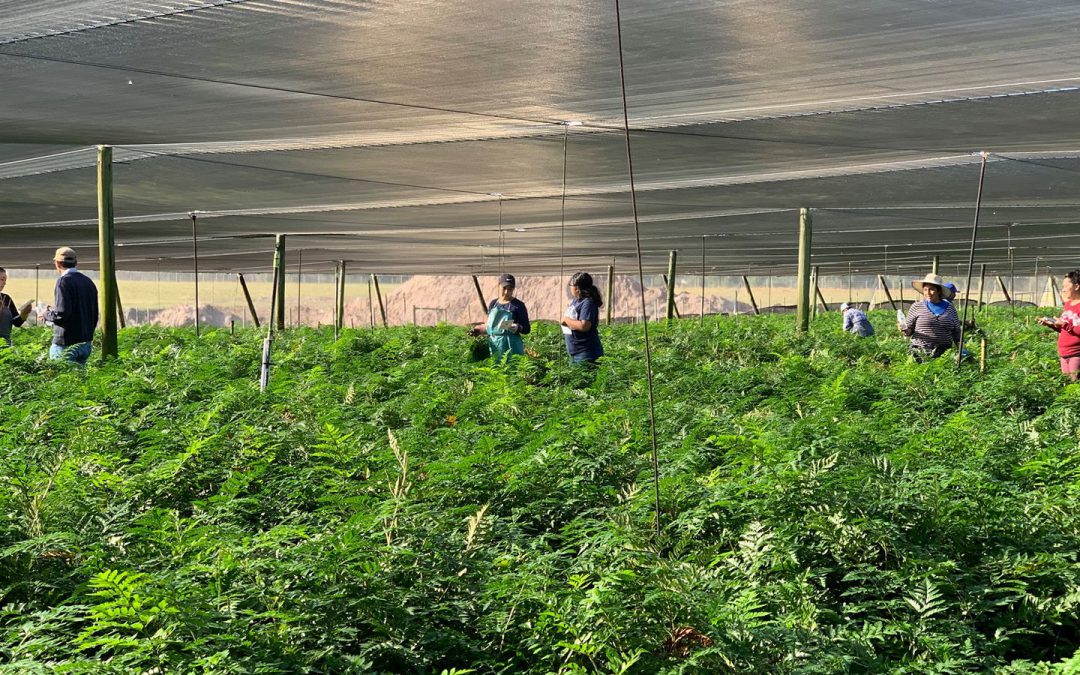 Farmworkers at a Volusia County fernery receive water bottles and safety guidance on heat stress in 2019. (Farmworker Association of Florida)

WASHINGTON — Working conditions for Florida’s undocumented farmworkers could drastically improve under recently proposed immigration reform legislation that would put them on a long-awaited path to citizenship while also providing labor protections.

“It’s something that needs to happen. We’ve been relying on imported farm labor forever, and we need to do right by the people who pick our fruits and vegetables,” said Nezahualcoyotl Xiuhtecutli, general coordinator at the Farmworker Association of Florida.

Nationwide, foreign-born workers make up 75% of the agricultural workforce, and about half of all farmworkers are undocumented immigrants. In Florida, the majority of farmworkers are immigrants who hail from South and Central America, according to the U.S. Department of Housing and Urban Development. Over 70% of U.S. Department of Labor investigations of farms found labor violations, including wage theft and inadequate housing and transportation, according to the Economic Policy Institute.

The U.S. Citizenship Act of 2021, unveiled last month by Sen. Bob Menendez, D-N.J., and Rep. Linda Sanchez, D-Calif., would make qualifying farmworkers immediately eligible for green cards, allowing them to apply for citizenship after three years instead of the current eight-year path to citizenship.

To qualify, farmworkers would have to pass a criminal and national security background check, pay a fee set by the Department of Homeland Security, show that they have been continuously present in the United States from Jan. 1 to the date on which they submit their application and show that they have performed at least 2,300 hours or 400 workdays of agricultural work during the five years immediately before they apply.

The requirements could cause problems for some undocumented farmworkers, said Florida Legal Services immigration attorney Nicole Avila. They may not have documentation from their workplace proving their work hours for the five-year period because farms often go without records or pay stubs. Or they may not be able to afford the $1,140 green card application fee.

But Julia Perkins of the Coalition of Immokalee Workers said providing Florida’s undocumented farmworkers a pathway to citizenship, even if difficult, is especially necessary at a time when they “have kept America fed during the COVID-19 pandemic, at great risk to the health and safety of themselves and their families.”

In addition to expedited citizenship, the bill would entitle the undocumented farmworkers to labor protections in the Fair Labor Standards Act, including minimum wage and overtime pay. It would penalize employers who violate the Migrant and Seasonal Agricultural Worker Protection Act, a set of standards that protects farmworkers from unfair treatment, and shield farmworkers who report workplace abuses from deportation. Further, the bill would establish a commission to make policy recommendations verifying the eligibility of noncitizens for employment.

Florida farmworker groups and lawmakers said the expedited path to citizenship would make farmworkers’ lives easier and safer, empowering them to report instances of exploitation without fear of deportation.

“If we give people a pathway to residency, they’ll be more likely to come forward,” said Rep. Darren Soto, whip of the Congressional Hispanic Caucus.

Soto, who represents Osceola and parts of Orange and Polk County, co-sponsored the bill, saying it is critical to ensuring that Florida agriculture has a stable workforce and to helping the state’s economy by increasing wages. He said immigrant farmworkers are invaluable to “everything from blueberries to strawberries to citrus to cattle essential for the Tampa Bay area.”

“Florida stands to be one of the states to gain the most under passing the U.S. Citizenship Act,” he said.

Florida Commissioner of Agriculture and Consumer Services Nikki Fried agreed, saying that the bill’s economic benefits “could help jumpstart growth as we are coming out of the pandemic” through job creation and higher wages for all workers.

Advocates said legal status would allow farmworkers to demand better working conditions with access to water and shade, more breaks and fair pay. They would be protected against retaliation for reporting violations such as pesticide exposure and could access basic services such as getting a driver’s license, opening a bank account or getting health care benefits.

“That’s going to be a big sigh of relief for the community at large,” Xiuhtecutli said.

Currently, the agricultural industry tries to make as much profit as possible at the expense of undocumented farmworkers, said Arturo Lopez, executive director of the Coalition of Florida Farmworker Organizations. Xiuhtecutli said that’s especially true for large farms, which treat their workers like an “assembly line kind of production.”

Still, despite widespread support, the bill’s path ahead is uncertain. Industry groups said it was premature to endorse or even comment on the bill. Republicans voiced opposition but provided vague or non-germane reasons for their objections.

A spokeswoman for the Florida Farm Bureau, which represents farmers, said: “While we think the U.S. Citizenship Act will not become law as written today, it starts an important conversation we have encouraged for decades. Our farmworkers and employees in Florida agriculture are critical to the sustainability and vitality of our rural communities. That is why fair, common-sense reforms must be adopted for a severely antiquated system. We look forward to moving past partisanship on this issue and striving for a serious approach to our agricultural labor challenges in this Congress.”

Executive Director of Florida Strawberry Growers Association Kenneth Parker said he is studying how the bill will impact farmers’ employment of farmworkers.

Similarly, the Florida Fruit & Vegetable Association said it is analyzing the proposed changes and looking at how it will affect members.

“Any discussion of immigration reform must recognize the essential role foreign workers play in ensuring a stable and reliable workforce for U.S. agriculture,” a spokeswoman for the association said.

Advocates of the bill acknowledge that it will take significant concessions to get Republicans on board, such as splitting the provisions into different bills. A minimum of 10 Republican votes would be required to defeat a Senate filibuster and move the bill to a final vote.

Several Florida Republicans have voiced opposition to the legislation. Rep. Mario Diaz-Balart, for instance, called the bill “unrealistic” and “purely partisan” in a press release.

Rep. Greg Steube said it “serves only to encourage more illegal immigration by granting amnesty to millions and failing to enforce critical immigration laws that keep both Americans and migrants safe.”

“Getting immigration reform done becomes a lot easier once the border is secure and there is a permanent solution for DACA,” Scott’s spokesman said.

Soto said that Democrats expect to either gain several Republicans’ support or use a process called reconciliation that requires only a simple majority for passage, bypassing a filibuster.

“One way or another, the planets have aligned on this,” Soto said.

Soto said he and other Democratic lawmakers support the Farm Workforce Modernization Act reintroduced on March 3, another pathway to citizenship for farmworkers that passed the House in 2019 but was not voted on in the Senate. House Majority Leader Steny Hoyer, D-Md., said in an immigration town hall that he is planning on bringing the bill to a vote this week.