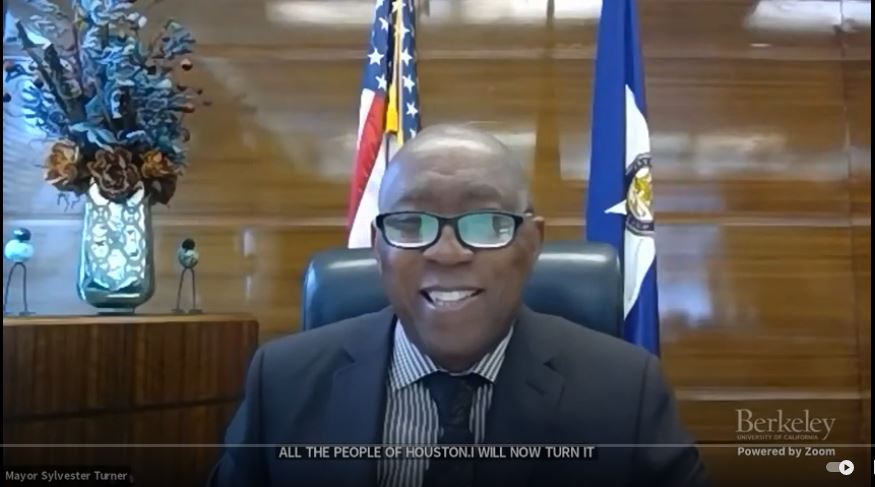 Houston Mayor Sylvester Turner shared how his city has grown their diversity and inclusion efforts throughout the pandemic.

Houston Mayor Sylvester Turner said cities need to do more to change systemic inequities that have become exacerbated by the COVID-19 pandemic, and pointed to his city’s COVID-19 relief programs for businesses that target historically underresourced areas.

Speaking at one of UC Berkeley’s events featuring Black mayors on Tuesday, Turner called the panel discussion a particularly “timely” one as Black and brown communities have disproportionately faced challenges regarding health care, education and resources. He highlighted some of Houston’s successful diversity and inclusion initiatives since the start of the pandemic.

According to the U.S. Census Bureau, over 22% of Houston’s population is Black and 45% of the population is Hispanic/Latino. Plus, Turner said, Houston has the largest LGBTQIA+ population in Texas. Still, Houston ranks among the top 20 most segregated cities in the U.S., according to the Kinder Institute for Urban Research at Rice University, a think tank focusing on urban issues.

“You can be highly diverse and segregated,” Turner said. “COVID-19 has demonstrated what happens when there’s a pandemic and when communities are disproportionately impacted.”

For cities like Houston with diverse populations, diversity and inclusion efforts need to continue on many fronts.

Pedro Noguera, dean of the USC Rossier School of Education at UCLA, noted that the winter storm that hit Texas in early March left many predominantly lower-income communities without power or water for days.

Noguera said diversity and inclusion needs “were severe before the pandemic, before the freeze” and those needs will continue when the pandemic ends. But the lack of trust disenfranchised communities have in their government is causing them to view suspiciously governments’ efforts to improve their performance.

Gail Christopher, executive director of the National Collaborative for Health Equity, said that the “legacy of racism” is the undercurrent of these tensions. Christopher pointed specifically to the skepticism surrounding the vaccine, although she added that it is not only communities of color that are skeptical of the vaccines’ efficacy.

“Some of the hesitancy on the part of at least the African-American community (and) in communities of color has to do with timing,” Christopher said, referring to how quickly COVID-19 vaccines were created.

But, she predicted that as more individuals see people they trust, like family members or friends, receive the vaccine, the less hesitancy there will be.

Noguera said the hesitancy extends to opinions on school reopenings.

“It’s a question of whether or not the people who are trusted by parents are telling them, ‘Yeah, it’s OK for your kids, come back. It’s going to be safe’,’” he said.

But many of the institutions are not led by people those parents trust.

“When you’ve been misserved, underserved for so long, it is hard to believe that suddenly now you can trust the health care system or the educational system, even though clearly we need them both right now to step up,” Noguera said. He added that there is a need for a change in leadership at all levels of government in order to build trust among communities of color.

But changing leadership can also mean maintaining diversity and inclusion efforts in policy for the long term, post-pandemic world.

“It’s not enough to just say we’re going to have equality and we’re going to distribute resources,” Christopher said. “If we’re going to close gaps now, we have to change the minds and the hearts of the larger number of people. We’re not going to get everybody, but we have to get the majority because that’s what it takes to sustain policy change in a democracy.”