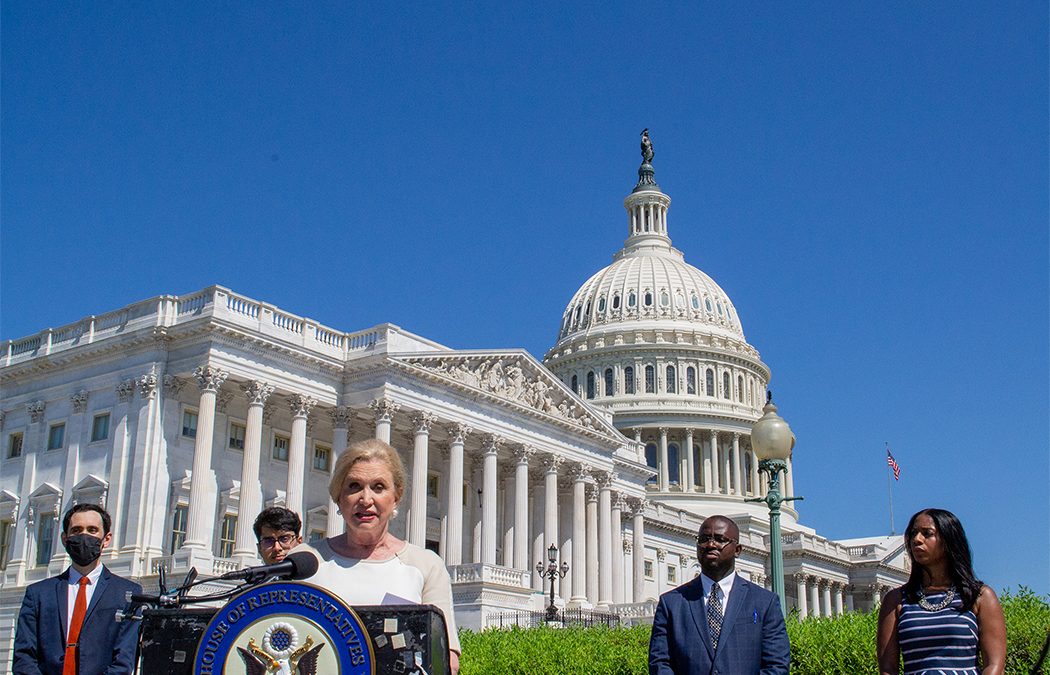 Rep. Maloney, D-N.Y., reintroduced the Overdraft Protection Act of 2021 in front of the Capitol on Wednesday. (Office of Rep. Carolyn Maloney)

Banks and other financial institutions took in billions of dollars in overdraft fees in the past year, hitting college students and people of color especially hard, Maloney said Wednesday.

“Overdraft fees particularly hit those hardest that can least afford it — cash-strapped, hard-working Americans, many minority communities, college students who are struggling to pay the bills,” said Maloney, a member of the House Financial Services Committee.

“Making matters worse, even during the pandemic, when the country and the world was in the midst of a health crisis, banks charged billions of dollars in overdraft fees,” she said.

The Overdraft Protection Act “will require that the fees be reasonable and proportional to the cost of processing these transactions,” Maloney said at a news conference outside the Capitol. “It would also prevent institutions from reordering transactions to increase their fees.”

The measure also would limit how often banks could enforce overdraft fees and require more transparency in marketing alternative options to customers.

“If people know that there’s these other options, like for instance, they could link their savings account, then they would possibly go for that kind of thing, as opposed to the one that costs them more money,” said Linda Sherry, director of national priorities at Consumer Action, in support of Maloney’s bill.

The American Bankers Association, meanwhile, conducted a consumer survey in 2020 that found that nine in 10 adults said their banks’ overdraft protection was valuable.

“Banks are committed to ensuring their customers understand and make informed choices about their overdraft options, and national surveys consistently show consumers value and appreciate overdraft protection,” said ABA spokesman Mike Townsend in an email. He also noted that many banks agreed to waive overdraft and other fees for customers affected by the COVID-19 pandemic.

Katz said smaller banks will have a tougher transition away from overdraft fees as the industry looks for other ways to make up that lost revenue.

But many financial institutions are beginning to see that ending overdraft fees may be a marketable advantage against their competitors, which could lead to more institutions ending the policies even if the legislation is not enacted, he said.

Maloney has tried passing the bill every congressional session since 2009, but feels the timing is right this year because Democrats control Congress and the White House. The measure has 30 Democratic co-sponsors.

The last time the Democrats had unified control in Washington was under President Barack Obama in 2009 to 2011.