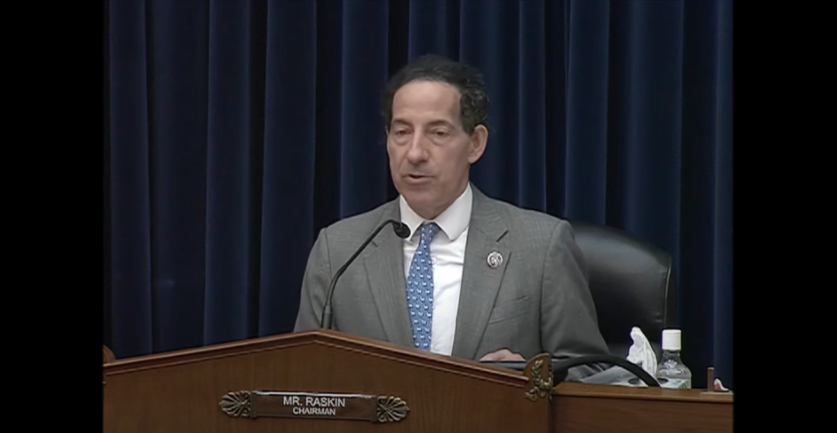 Representative Jamie Raskin, D-Md., said he believes the most dangerous domestic terrorist threat in the United States arises from white supremacist groups, like the ones that stormed the U.S. Capitol on Jan. 6. (Screenshot / Medill News Service)

WASHINGTON – House members appeared divided on which facets of domestic terrorism represent the largest threat to the United States with Democrats emphasizing the dangers of white supremacy and Republicans drawing attention to violent crimes and Antifa.

The House Oversight and Reform subcommittee met Wednesday morning for its sixth hearing in a series about efforts to confront violent white supremacy domestically.

The hearing sought to examine the Biden administration’s counterterrorism strategy, which subcommittee Chairman Jamie Raskin, D-Md., said represents the first time an administration has attempted to formulate a plan to deal with the threat of violent white supremacy.

Raskin noted the importance of a counterterrorism strategy in light of the Jan. 6 insurrection.

“That day, the whole world watched the storm troopers of violent white supremacy act as the vanguard of a mass violent political insurrection against the government of the United States,” Raskin said.

However, Rep. Nancy Mace, the Republican ranking member of the subcommittee, pushed the departments of Homeland Security and Justice, as well as the FBI, to provide details about Antifa’s role in domestic terrorism.

When looking at domestic terrorism, Timothy Langan, the assistant director of the counterterrorism division at the FBI, noted that the bureau does not identify groups, but rather examines individuals’ actions.

Mace and other Republicans did say that in addition to Antifa, they remained concerned about white supremacy. Mace’s district in South Carolina was the site of a domestic terrorism attack in 2015, when the lawmaker said a “Nazi-worshipping, white supremacist” killed nine Black churchgoers.

“This tragedy inspired me and countless others in untold ways to work to root out the worst evils in our community,” Mace said.

Both Democrats and Republicans at the committee hearing said any strategy seeking to counter violent white supremacy or domestic terrorism in general must not intrude on individuals’ civil rights or freedoms, although for different reasons.

Rep. James Comer, the ranking member of the full committee, said he believes it is essential that any strategy to prevent domestic terrorism not limit personal freedoms.

“We must safeguard our fundamental freedoms and not allow prejudice against religion or ideology to cloud our responses,” the representative from Kentucky said. “Our strategy to combat all violence must be …  completely neutral as to ideological motivations no matter how repugnant.”

In order to confront the threat of violent white supremacy, Democratic Rep. Ayanna Pressley said she believes law enforcement agencies must recognize how they have contributed to the harm, destabilization and trauma of Black and brown communities.

“The surge of violent, organized white supremacy knows no bounds and has claimed the lives of far too many of our neighbors,” the Massachusetts lawmaker said. “Moreover, federal law enforcement has a well-documented history of attacking these same communities. The truth is racial and religious profiling in counterterrorism has disproportionately targeted marginalized communities.”

John Cohen, the coordinator for counterterrorism in the Homeland Security Department, acknowledged that the Countering Violent Extremism Task Force created during the Obama administration was based on flawed assumptions.

Cohen added that the previous CVE strategy focused on the belief that attackers came from specific communities.

“This (new) approach recognizes that those who are engaging in violence come from a broad cross-section of racial, ethnic, socioeconomic elements of our community,” Cohen said. “It’s not limited to a specific community.”