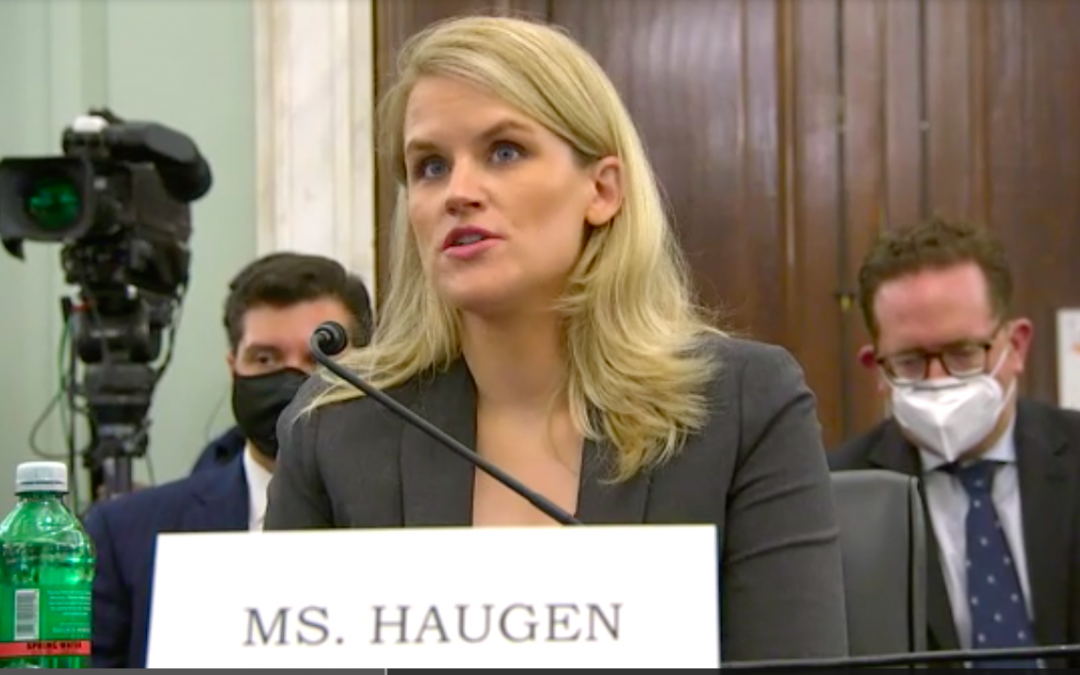 WASHINGTON – Facebook whistleblower Frances Haugen told a Senate panel on Tuesday that the social media giant has consistently failed to protect children and “intentionally misled the public about what its own research reveals.”

Haugen has also filed a whistleblower complaint with the Securities and Exchange Commission, alleging that Facebook misled investors by having internal actions contradict its public statements.

Haugen, who worked at Facebook as both lead product manager for Civic Misinformation and later at Counter-Espionage, previously provided internal documents to the Wall Street Journal under the pseudonym “Sean,” showing that teenagers, in particular, are being harmed by the platform’s algorithms. She first revealed her identity on Sunday, telling CBS’ 60 Minutes that “Facebook, over and over again, has shown it chooses profit over safety.”

She pointed to both Facebook and Instagram’s engagement-based rankings and Facebook’s use of artificial intelligence to filter advertisements as particularly problematic.

Sen. Mike Lee, R-Utah, latched on to the advertising issue, noting that the nonpartisan Technology Transparency Project created fake ads promoting drugs, eating disorders, alcohol and gambling that were targeted to teenagers — and all were approved, likely by Facebook’s AI approval system.

“I did not work directly on the ad approval system,” Haugen replied, before noting that Facebook has been using artificial intelligence to help scale the business. “It is very possible that none of those ads were seen by a human.”

“And the reality is that we’ve seen from repeated documents within my disclosures, is that Facebook’s AI systems only catch a very tiny minority of offending content,” she continued. “And best case scenario in the case of something like hate speech, at most they will ever get 10-20%.”

She said about yesterday’s outage that left Instagram, Facebook, Messenger, and Whatsapp down for more than five hours, “Facebook wasn’t used to deepen divides, destabilize democracies, and make young girls and women feel bad about their bodies.”

Facebook’s vice president of infrastructure, Santosh Janardhan, said on Tuesday that the outage was “caused not by malicious activity, but an error of our own making.”

“Teens today looking at themselves in the mirror feel doubt and insecurity,” he said. “Mark Zuckerberg ought to be looking himself in the mirror today.”

Haugen noted that no other major social media platform has an ownership structure like Facebook, where Zuckerberg holds over 55% of the voting shares.

“There is nobody currently holding Zuckerberg accountable but himself,” Haugen said. “The buck stops with Mark.”

She noted that she was not advocating for breaking up Facebook, because the company would have less funds to make its platform safe.

“The problems here are about the design of algorithms, of AI” she said, adding that executives could make similar choices even if Facebook and Instagram were separate companies.

Haugen emphasized that she does not think it is too late to act, but that Facebook needs outside regulation and further transparency.

“We can afford nothing less than full transparency,” she said. “As long as Facebook is operating in the shadows and hiding its research from public scrutiny, it is unaccountable.”

Bipartisanship was in the air on Tuesday, with not a single senator defending Facebook and Republicans and Democrats alike thanking Haugen for her testimony.

Many mentioned bills that they are working on, including an effort by Blumenthal and Sen. Jerry Moran, R-Kan., to create online privacy legislation.

Facebook has continued to dispute the findings of the internal research, as well as Haugen’s qualifications.

Andy Stone, the Policy Communications Director at Facebook tweeted during the hearing: “Just pointing out the fact that France Haugen did not work on child safety or Instagram or research these issues and has no direct knowledge of the topic from her work at Facebook.

And when Facebook executive Antigone Davis testified before the Senate panel last week, she similarly dismissed the research as “not a bombshell.”

“Well, this research is the very definition of a bombshell,” Blumenthal said Tuesday. “Facebook and big tech are facing a big tobacco moment, a moment of reckoning.”

“It’s not just that made money, again, it’s that they valued their profit more than the pain that they caused to children and their families,” he added.