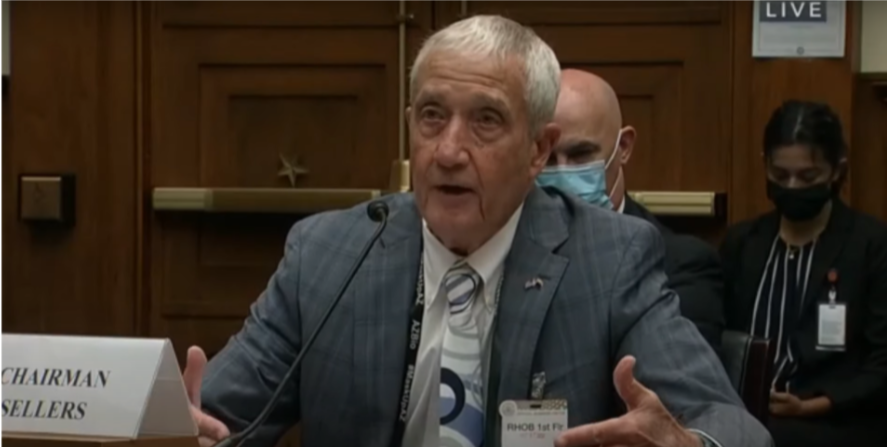 Jack Sellers, Chairman of the Board of Supervisors in Maricopa County, Ariz., testifies before the House Committee on Oversight and Reform. (C-SPAN)

Maricopa County, which was called for President Biden, was made by the GOP-led state Senate to turn over its 2020 ballots to the little-known Florida-based firm Cyber Ninjas, new to election auditing. After a hand recount, Cyber Ninjas confirmed the initial canvass and reported 99 more Biden votes — and 261 fewer Trump votes — than were first tallied.

“Tens of millions of Americans, sincerely disappointed that their candidate lost, have been targeted in a scam to keep them angry, divided and donating,” said David Becker, Executive Director of the Center for Election Innovation and Research.

The months-long audit process exacerbated and prolonged voter mistrust in the 2020 president-elect, said Becker. Trump supporters have been fed “a constant diet of lies telling them that millions of their fellow citizens, half of them members of their own party, engaged in a massive conspiracy to deliver the election to the current president, and that none of the millions of conspirators are talking.”

Conspiracies like those that drove the Maricopa County audit, said Brennan Center for Justice senior counsel Gowri Ramachandran, “lay the groundwork for legitimizing future attempts to sabotage elections to reject the will of the voter.”

But Republican lawmakers were dogged in their insistence that the 2020 election was fraudulent. Rep. Andy Biggs, R-Ariz., said he still contested the audit results showing Biden’s victory.

Rep. Jamie Raskin, D-Md., then asked Biggs who won the 2020 presidential election — Biggs responded that he did not know.

Biggs himself was up for re-election on the 2020 ballot in Arizona, as was Rep. Paul Gosar, R-Ariz., who also questioned the results. Democratic lawmakers drew attention to this contradiction, attributing it to the fanaticism of the Trump camp.

“One of the world’s great political parties,” said Raskin of Republicans, has followed Trump “off of the ledge of this electoral lunacy.”

Jack Sellers, Chairman of the Board of Supervisors in Maricopa County, and vice chair Bill Gates testified about the onslaught of physical threats they, their families and other election volunteers now face. Gates worried the controversy and danger will dissuade volunteers from contributing to the election process and further transparency efforts.

““I don’t have a problem with audits. I had concerns with this particular audit,” said Gates.

“It was not a flawed election process,” said Seller. “It was a candidate that many Maricopa County Republicans simply did not support.”

In a press briefing after the hearing, Becker said, “This isn’t an audit. This is an audit like if you have a concern that you have appendicitis, and you have an examination from a stand-up comedian. It would be funny, if it weren’t so dangerous.”