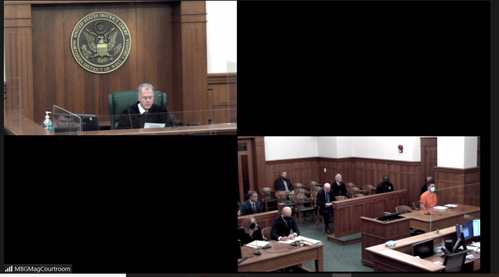 WASHINGTON — The naval engineer and his wife who allegedly tried to sell U.S. nuclear submarine secrets appeared today for the first time in federal court.

Jonathan and Diana Toebee appeared this morning in federal district court in Martinsburg, West Virginia, after being arrested on Saturday for attempting to pass off state secrets to an unnamed foreign power. If found guilty, they each face a maximum sentence of up to life in prison, a fine of $100,000 and five years of supervised release.

The Toebees allegedly violated the Atomic Energy Act by trying to sell restricted data on nuclear-powered warships to a foreign power — who in reality was an undercover FBI agent.

Jonathan Toebee, 42, worked for the Department of the Navy on a nuclear propulsion program — granting him a top secret national security clearance, and access to classified information on nuclear submarines. According to the complaint affidavit, Toebee began attempting to sell this restricted data to a foreign government in April 2020. For over a year, the FBI led Toebee to believe he was corresponding with a foreign partner.

On June 26, Toebee and his wife Diana, 45, traveled from their home in Annapolis, Md to a pre-arranged location in West Virginia where Jonathan dropped off an SD card with restricted data on the design of submarine nuclear reactors — concealing it inside half of a peanut butter sandwich. Diana acted as a lookout.

Multiple other “dead drops” were made later in July and in August, with more SD cards hidden inside Band-Aid wrappers and packs of chewing gum.

According to a Department of Justice press release, the unnamed FBI agent sent multiple cryptocurrency payments totaling at least $100,000 to the Toebees for the restricted data.

“It’s not unheard of,” he said. “I don’t know why, but it has happened just a little bit more in the Navy than in other services.”

“It’s very common,” Bowman added, for the FBI to lead on intelligence officials seeking to illegally sell government information so they can uncover who else these individuals are trying to sell classified secrets to.

“What is less common in these cases is apparently the country who he was trying to sell information to turned over to the FBI what he had sent them,” Bowman said. According to court documents, the unnamed foreign country did in fact inform the FBI that Toebee had contacted them.

The next court appearance for the Toebees will be this Friday, October 15, 2021 and will determine whether the couple will be detained with or without bail.