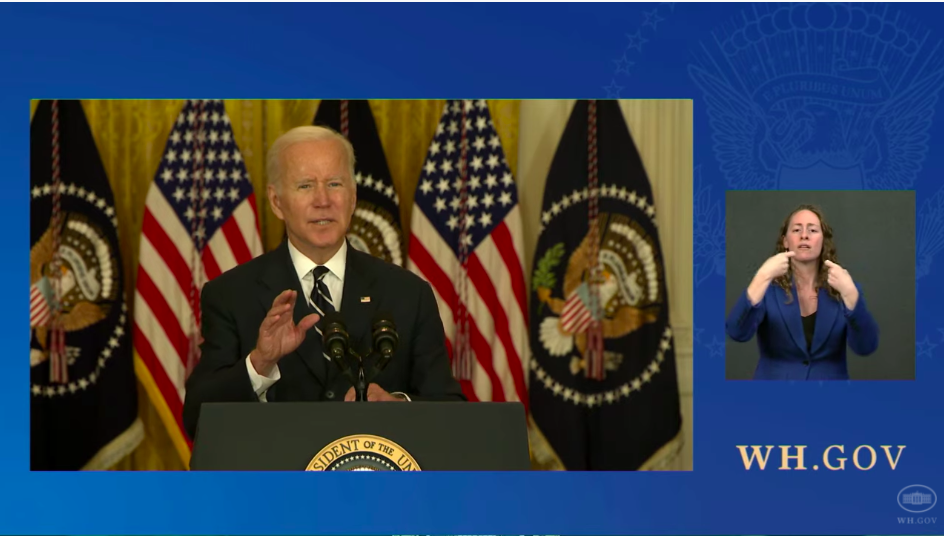 President Joe Biden announced his framework for the Build Back Better Act on Thursday. (WhiteHouse.gov)

WASHINGTON — Two years of tuition-free community college did not make the cut in the Democrats’ multi-trillion spending bill, leaving many lawmakers and advocates frustrated over what was one of President Joe Biden’s signature campaign promises.

“No one got everything they wanted, including me, but that’s what compromise is. That’s consensus. And that’s what I ran on,” President Biden said, announcing the negotiated bill’s framework on Thursday.

Over the past month, a few key Democrats with effective veto-authority pushed back against the spending measure’s original $3.5 trillion price tag, causing dramatic cuts to key pieces of the president’s core agenda.

Whether or not the measure passes has and continues to depend almost entirely on Democratic holdouts Joe Manchin and Kyrsten Sinema, who have unilaterally objected to numerous priorities, popular among voters, which their fellow lawmakers endeavored to fund.

“Two conservative Democrats are trying to decide the fate of 8 million Americans whose life would be changed by free community college,” Rep. Andy Levin, D-Mich., wrote in a tweet on Tuesday.

However, some are less frustrated with Manchin and Sinema, and instead place the blame further down Pennsylvania Avenue.

“It’s incredibly disappointing that [Biden] and his administration did not make this a priority in their negotiations and in their agenda,” said Max Lubin, CEO and co-founder of Rise, a student-led advocacy organization.

“The White House will lay the blame at the feet of senators who opposed it, but there’s plenty of stuff that is in the framework that senators opposed, and the reason it’s still there is because [the administration] fought for it,” Lubin added.

Though the community college component didn’t make the final cut, the so-called reconciliation bill will include other education-related provisions. Biden’s framework promises to increase the maximum Pell Grant by $550 and expand access to “Dreamers,” immigrants who were illegally brought to the U.S. as children. It will also invest in historically Black colleges and universities, minority-serving institutions, and tribal colleges and universities.

Lubin said this investment is not enough, pointing out that the increase in Pell Grants amounts to an additional $1.50 a day.

“That’s not enough if you’re a food-insecure student to buy a healthy meal. It’s not enough to buy even a coffee in a lot of cities,” Lubin said.

Tuition-free college has been on the minds of progressive lawmakers for a long time, and it has support among much of the Democratic base. In a study from July, Pew Research Center found that 85% of Democrats and Democratic-leaning independents favored making all public colleges and universities free.

“There are plenty of policy areas that have certainly animated young folks broadly, and college students specifically, over the past few years — none more so than student debt and proposals to make college more affordable,” said Mark Huelsman, senior policy fellow at the Hope Center for College, Community and Justice.

Rep. Pramila Jayapal, D-Wash., and Sen. Bernie Sanders, D-Vt., introduced legislation in April that would make community college free for all Americans, and would make any public colleges or universities free for families making up to $125,000.

“From the progressive viewpoint, this was already kind of a watered-down approach,” said Michelle Miller-Adams, senior researcher at the W.E. Upjohn Institute for Employment Research and political science professor at Grand Valley State University.

First lady Jill Biden, who has a doctorate in education and is a community college professor, has been very vocal about her support for the initiative.

When asked on “Good Morning America” last week how she would respond to those who were hoping for free community college, Biden said, “We are not giving up. This is round one. This is year one. I’m going to keep going.”

Looking to the Future

New proposals are likely to emerge in the near future, experts said.

“This is not an issue that’s going away anytime soon,” Huelsman said. Miller-Adams agreed, adding, “We’re at the beginning of a movement.”

Looking ahead, Huelsman said there are two options likely on the table soon. First, Democrats could pursue another budget bill in 2022, again including a provision for free community college.

However, Lubin said that if Democrats try to include free community college in another reconciliation measure next year, “we need the President to fight harder for it.”

The other option Huelsman brought up is updating the Higher Education Act.

Revising the HEA “is probably the most likely vehicle” for achieving free community college, Huelsman said. Sen. Patty Murray, who chairs the Senate Committee on Health, Education, Labor and Pensions, previously expressed her support for its reauthorization.

Martha Kanter, CEO of College Promise, said that while she is hopeful for the future of free community college, she is also pragmatic about the realities of trying to pass legislation.

“Government is government,” Kanter said. “You have to be persistent and flexible and patient at the same time.”

One part of governing that will never change is the possibility that a new party could emerge with the majority during the next election cycle. If Republicans take either the Senate or House in 2022, Biden and his supporters may see all future options, at least in their current forms, disappear.