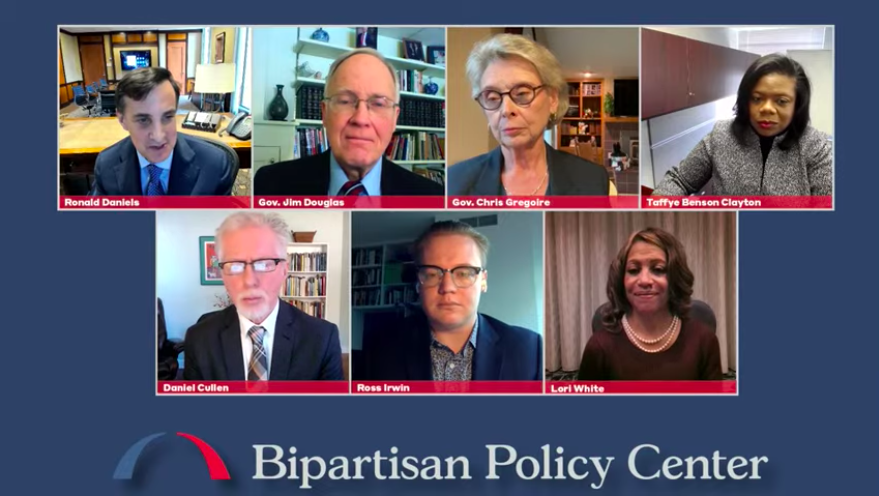 WASHINGTON — As colleges and universities serve increasingly diverse student bodies, it is imperative that their campuses foster open discussion and civic debate, university presidents, faculty and civic leaders said at a webinar on Tuesday.

In November of 2020, the Bipartisan Policy Center launched the Academic Leaders Task Force on Campus Free Expression to determine the best practices for fostering open dialogue on college campuses. The task force just released their findings in a new report, “Campus Free Expression: A New Roadmap,” which provides recommendations for college leaders on how to maintain a free exchange of ideas and promote tolerance.

“University presidents don’t have a choice but to lead on this issue, and lead confidently and squarely,” said Chris Gregoire, co-chair of the task force, CEO of Challenge Seattle and a former governor of Washington.

Colleges and universities should serve as an example for the rest of the country on how to promote civil discussion, Gregoire added.

“We have a civil skills deficit in this country, and we’ve got to find a solution. If it’s not this, then what?” said Jim Douglas, co-chair of the task force, executive in residence at Middlebury College, and a former governor of Vermont.

Free expression on college campuses has been a major point of contention in national politics, particularly for those with conservative views.

In 2019, President Trump issued an executive order to protect freedom of speech on college campuses, ordering 12 agencies that determine federal grants to ensure colleges follow the law in implementing policies relating to free inquiry. The order was welcomed by those who have expressed concern that conservative views are being stifled at universities across the country.

According to a Wall Street Journal article, many moderate and conservative alumni are now forming organizations to promote free speech and counteract what they say is a progressive indoctrination on college campuses. On October 18, alumni groups from five universities joined together to form a larger, national organization called the Alumni Free Speech Alliance.

Lori White, a task force member and president of DePauw University, said many college students are raised in “homogeneous environments,” therefore making it difficult for them to engage in civic discussion with those who hold differing opinions.

“We have to give students the tools to be able to engage in the kind of debate and intellectual conversation that we want to see happen on our college campuses,” White said.

Furthermore, social media has created an added fear for students and faculty who worry about being criticized for their opinions, as their words or actions can easily be shared with the public, White added.

Ultimately, members of the task force underscored, college leaders must work with their campus communities to foster inclusive and open environments for students to express themselves.

“This is a culture issue. You can’t mandate that people appreciate viewpoint diversity,” said Ross Irwin, a task force member and COO of BridgeUSA. “This is a long process, where you are looking for faculty and administrators—and eventually students—who support listening to other viewpoints and support the ideas of free expression so that the campus culture, as a whole, can be welcoming to those ideas as well.”