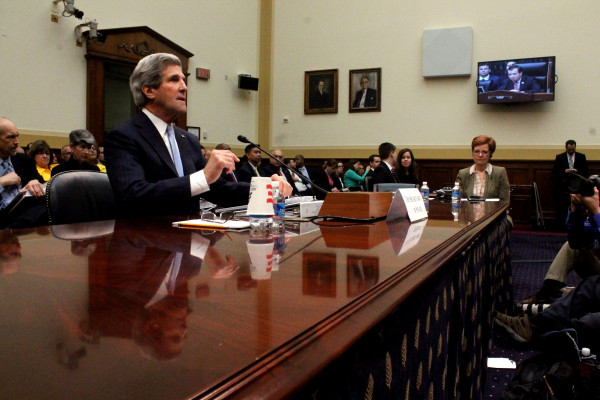 John Kerry speaks at a virtual conference where he touts accomplishments made at COP26 are real, though there is much work to still be done. (Jennifer-Leigh Oprihory/MEDILL NEWS SERVICE)

WASHINGTON — “I am worried about it…for the obvious reasons,” said John Kerry, the first U.S. special presidential envoy for climate, when asked if he was concerned over whether the international community will be successful in mitigating harmful fossil fuels and rising global temperatures.

“We have to be doing everything faster,” he said.

“In fairness, I don’t think it’s either weak or missing specificity,” said Kerry about a joint commitment between the United States and China to limit greenhouse gas emissions  — a declaration some activists have described as lacking details.

“I think it was no secret from the U.S. side of things we’re trying to get all countries of the world, certainly on the climate change front, to step up, to be ambitious, to be aggressive,” said Deputy Energy Secretary David M. Turk on Wednesday while reflecting on his experience negotiating with U.S. global counterparts at COP26.

Following the international summit, the Biden administration is now looking to achieve its climate goals domestically via the $1.75 trillion Build Back Better Act, which passed the House before Thanksgiving. The gridlocked Senate still needs to vote on the measure.

The House-passed version includes $555 billion allocated for tax incentives, updates to the electrical grid and other environment-friendly policies, the largest direct investment toward combating climate change in American history.

“It is important to know that any funding EPA implements through the Build Back Better agenda will support the agency’s commitment to protect underserved communities across the country and further support EPA’s mission to protect human health and the environment,” said Taylor Gillespie, a strategic communications coordinator at the Environmental Protection Agency, which would oversee the management of some of the enacted policies if the bill becomes law.

The Conservatives for Climate

Despite an uphill battle in the Senate, Biden and his fellow Democrats are not the only lawmakers advocating for climate legislation reform.

“It really has been a growing concern of mine that Republicans, because of our silence, have allowed ourselves to be branded as not caring, or somehow denying the science, and that’s really just not true,” said Rep. John Curtis, R-Utah, the founder and leader of the Conservative Climate Caucus in Congress.

Curtis is one of roughly half a dozen GOP lawmakers who attended the COP26 summit in Glasgow, but then later in November joined all of his fellow House Republicans in voting against the Build Back Better Act, despite the large climate provisions.

“We just are turned off by the current approach and current dialogue on it,” said Curtis on Tuesday during a virtual talk with the Hudson Institute, a conservative Washington think tank.

A looming government shutdown on Friday, and partisan debate over passing the annual defense policy bill, have further stalled progress for now on the Build Back Better Act.