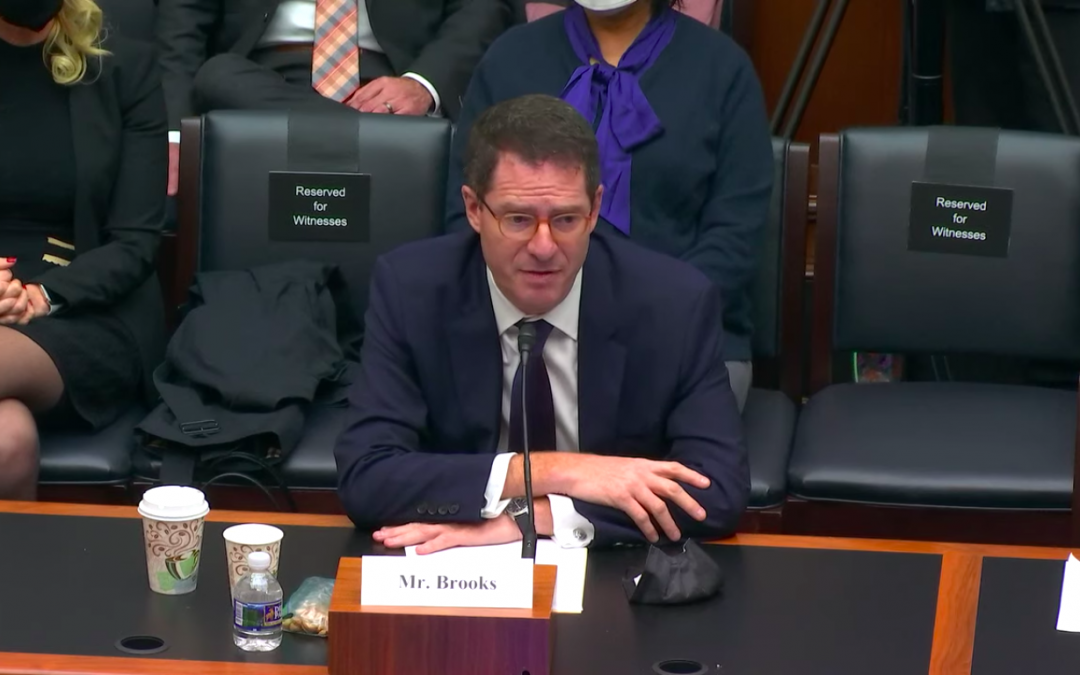 Brian Brooks, the CEO of Bitfury Group, was among six chief executives of cryptocurrency companies to testify before Congress on Wednesday (House Financial Services Committee)

Waters, who chairs the House Financial Services Committee, scheduled the hearing in an effort to better understand how the government could best prepare for an increasingly digital financial future.

The nearly five-hour-long hearing followed last week’s release of a report from the President’s Working Group on Financial Markets, the Federal Deposit Insurance Corporation and the Office of the Comptroller of Currency.

The report called for increased oversight of stablecoins, a cryptocurrency whose value is designed to match that of the U.S. dollar.

Treasury Secretary Janet Yellen noted that well-designed and regulated stablecoins “have the potential to support beneficial payments options,” but added that “current oversight is inconsistent and fragmented.”

The PWG report recommended legislation that requires stablecoin issuers to be insured depository institutions, but cryptocurrency executives on Wednesday took issue with potential ramifications of instituting that limitation.

“Is it consistent to take the position that only banks should be allowed to issue stablecoins but then fail to grant bank charters to the largest issuers of stablecoins?” said Brian Brooks, the CEO of Bitfury Group.

The hearing did not focus on any specific policy proposal, but instead focused on the potential cryptocurrency has to revolutionize commerce and finance — and the benefits of the U.S. positioning itself early on in the industry.

“The United States and the U.S. dollar is winning the digital currency space race today. Dollar stablecoins are doing trillions of dollars in transactions,” Circle CEO Jeremy Allaire said in response to a question about competition with China. “The experimental beta of a Chinese Yuan, which is government-controlled in China, has done ten billion dollars of transactions. So the United States is winning.”

Despite the U.S.’ early entrance into the crypto field, several lawmakers expressed concerns that current regulations could drive business elsewhere

“My fear is that this regulatory state, it’s going to crack down on an industry that the regulators really don’t understand yet and it’s going to force the next generation of financial tech to be created outside of our country,” said Republican Rep. Ted Budd. “We can’t let that happen.”

Brooks echoed Budd’s comment, noting that certain crypto investment products such as digital asset ETFs have not been allowed by the Securities Exchange Commission, but have been permitted by other countries such as Portugal, Singapore and Germany.

“So we’re behind the curve?” Budd asked.

The CEOs answered questions about minority inclusion and environmental impacts, and several lawmakers said their concerns were alleviated, at least in part, by the solutions presented.

The executives, however, appeared unable to win over Rep. Brad Sherman, D-Calif., who adamantly opposed corporate backing of cryptocurrency.

“Cryptocurrency is an incredibly volatile investment that aspires to be a currency that might displace or at least compete with the dollar,” Sherman said. “The stablecoin aspires to be incredibly stable and is tied to the dollar. What they share is a culture, a vibe, a stick it to the man moniker, a belief that somehow this is new and hip and an attack on the powers of society.”

“But the fact is the advocates of crypto represent the powers in our society,” he continued. “The powers in our society on Wall Street and in Washington have spent billions and are trying to make billions or trillions in the crypto world. These include Goldman Sachs, JP Morgan, Visa, BlackRock, Citadel, [Elon] Musk and [Mark] Zuckerbeg, not to mention the CEOs that are before us here today.”

Rep. Anthony Gonzalez, R-Ohio, did not directly name Sherman but clearly alluded to his statements as demonstrating “a complete and utter misunderstanding of what we’re even doing here today.”

“One contention is that the vibe of crypto is a stick-it-to-the-man vibe but in actuality, it is dominated and controlled by Big Tech and Wall Street,” Gonzalez said. “While the culture may be somewhat accurately described, the notion that a handful of Big Tech leaders and Wall Street banks somehow created and now control crypto is absurd on its face, and frankly anyone who would make such a claim, I believe, should be ignored on this topic.”

But all six of the executives appeared open to some form of added regulation, likely due to the fact that increased consumer protections will help cryptocurrency continue to rise to the mainstream.

And while the exact path toward increased regulation remains unclear, Democratic Rep. Jake Auchincloss said the clear first step will be working in a bipartisan manner to designate a regulatory body.

“I feel like we’ve really got a pretty clear path forward for one step that we can take which is Congress should designate a regulator, at least initially…and task them with disclosure and auditing requirements for the stablecoin,” said the lawmaker.