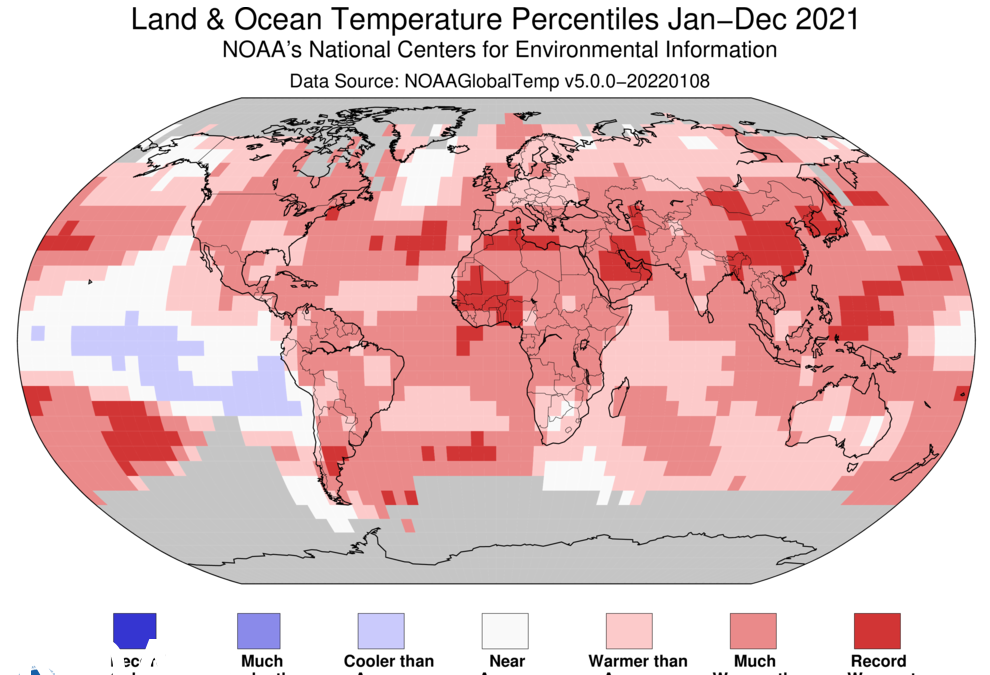 The year 2021 measured in as the sixth hottest year on record, according to a global temperatures report released by the National Oceanic and Atmospheric Association on Thursday. (Courtesy of NOAA).

Separate climate assessments from NASA, the National Oceanic and Atmospheric Administration and temperature analysis nonprofit Berkeley Earth found that global temperatures last year, on average, were on par with those recorded in 2015 and 2018, making it the sixth-hottest year on record.

But they warned that ranking the annual global average alone doesn’t provide a complete picture of temperature trends over time.

“In any given year, [the temperatures] might be a little warmer, a little cooler. But it all fits a pattern, it all fits a trend. We’ve been warming up for quite some time,” said Russell Vose, chief of climate monitoring at NOAA’s National Centers for Environmental Information and a member of the team that assembled agency’s the report.

In an overview of an annual report released on Monday by NOAA, scientists also said that 2021 ranked as the fourth-warmest year on record in the United States, with December 2021 being the warmest December ever recorded. The full report was due out Thursday.

Adjusted for inflation, 2021 was the third-costliest on record for extreme weather events, after 2017 and 2005, the report said.

The events cited include Hurricane Ida, wildfires and a deadly heat wave in the West, three separate tornado outbreaks in the South and central parts of the United States, and unusually cold temperatures in Texas that left millions of people without electricity.

While the Copernicus Climate Change Service concluded that 2021 was the fifth hottest year on record rather than the sixth, the difference in rank isn’t statistically significant.

The Copernicus record is based on a re-analysis that uses a model to estimate what temperatures were based on information from satellites and sensors, while NASA draws on direct observation surface temperature measurements, said Gavin Schmidt, director of agency’s Goddard Institute for Space Studies.

“The ranking of the global mean level doesn’t really matter,” Schmidt said. “What matters is these long-term trends that have kind of pushed us into a regime where now we can see the impacts of global warming in local weather.”

Despite minor differences, each dataset underscored a decades-long trend toward rising global temperatures.

“The first time that global warming really hit the media was in 1988 when James Henson gave his testimony to Congress and he said global warming is here,” Schmidt said, referring to the top climate scientist at NASA at the time.

“1988 was … the warmest year on record to that point. And now, some 30-odd years later, that year is the 28th [warmest one]. … So, we’ve had almost three decades of warmer temperatures from the point at which we first started talking about this, and that’s going to continue,” Schmidt said.

The coronavirus pandemic did not have a significant impact on global temperatures or cause a divergence from temperature trends in 2021, experts said.

The reduction in carbon dioxide emissions and aerosol air pollution amid lockdowns in 2020 created a slight climate warming because air pollution produces a short-term cooling effect.

Looking ahead, experts said they expect another global temperature record within the decade, which could produce more extremes in local and regional weather, from fires to floods.

“Even if you’re lucky enough to look out your window and not see a tropical storm or a fire, there’s still more subtle ways where climate change is affecting all of us, across the nation and the world,” said Lesley Ott, a climate scientist at NASA’s Goddard Space Flight Center in Maryland.

“We know that heat is the fuel for many of these extreme events, so as we see this march upward of temperatures,” Ott said. “We expect many of these kinds of extremes to continue.”