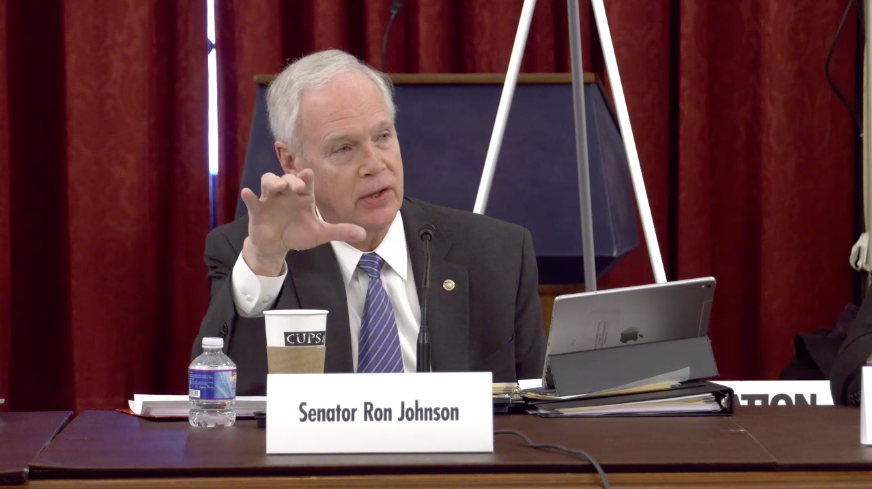 The panel, while not an official Senate hearing, was held in the Russell Senate Office Building on Monday and lasted for nearly five hours. (Screenshot from Sen. Johnson's Panel)

WASHINGTON — Sen. Ron Johnson on Monday convened a group of doctors and scientists who have been criticized for spreading COVID-19 misinformation to “get a second opinion” on the health issues facing Americans because of the pandemic.

“Until COVID, a fundamental principle of medicine was — when dealing with a serious illness — to get a second opinion, maybe even a third,” Johnson said. “Today is about getting that long-overdue second opinion.”

Immediately after Johnson’s panel, the Committee to Protect Health Care, an advocacy group aligned with Democrats, held a Zoom call with Wisconsin doctors to criticize the senator for spreading misinformation.

“Senator Johnson has done this before. This isn’t new,” said Bob Freedland, an ophthalmologist in La Crosse. “Senator Johnson continues to give a megaphone to notorious COVID-19 misinformation doctors.”

Dr. Ann Helms, a critical care neurologist in Milwaukee, said she believes that Johnson is trying to look tough.

“I think there’s just an interest in pretending this isn’t happening,” she said. “We’ve made this into a partisan issue when it shouldn’t be. This should be about listening to the science.”

The discussion was advertised as an alternative perspective to the U.S. government’s response to COVID-19. Speakers and audience members gathered in person, without masks, in the Russell Senate Office Building — although the event was not an official Senate hearing.

A day earlier, several of the speakers attended the “Defeat the Mandates” rally of several thousand demonstrators who marched from the Washington Monument to the Lincoln Memorial to protest COVID-19 vaccination mandates.

Notable attendees at both events included Dr. Robert Malone, a doctor and infectious disease researcher removed from Twitter for spreading COVID-19 misinformation, and Christina Parks, who holds a Ph.D. in cellular and molecular biology and is a staunch critic of COVID vaccines.

Johnson praised the speakers for their “courage and compassion” in treating COVID-19 patients with alternative medical options.

“I want to thank the courageous doctors who have shown the compassion to actually treat patients … and suffer the vilification, the censorship, the suppression …that has come with their courage,” Johnson said.

CLAIM: “The (COVID) virus is not spread from an asymptomatic person to another asymptomatic person,” said Dr. Peter McCullough, former vice chief of internal medicine at Baylor University Medical Center, who was sued for illegitimately representing himself as a Baylor employee while promoting misinformation about COVID-19.

FACT: “More than half of transmissions that occur in our communities are occurring by people who have no symptoms,” said Ajay Sethi, associate professor of population health sciences and faculty director of the Public Health master’s program at UW-Madison. “This is a virus in which people become infectious before the symptoms begin, and for some of those people, the symptoms may never begin, and yet they’re infectious while they’re asymptomatic.”

CLAIM: Dr. Aaron Kheriarty, a former professor in the University of California-Irvine School of Medicine who was fired over his refusal to be vaccinated against COVID-19 and other reasons, said people with “natural immunity,” meaning people who have developed antibodies after contracting a virus, cannot be reinfected with COVID-19 or transmit the virus to others.

FACT: While it is true that people may develop antibodies to a virus like COVID-19, a Centers for Disease Control and Prevention study released in September found that 36% of those with prior COVID infection did not produce any antibodies.

“You have to survive COVID in order to walk away with some immunity that can be protective for the future, and how long that protection lasts varies from person to person,” Sethi said. He noted the emergence of new variants continues to threaten prior immunity. As stated by the CDC, “reinfections do occur after COVID-19.”

CLAIM: Johnson claimed the National Institutes of Health has told those who test positive for COVID-19 to “go home and do nothing.”

FACT: “Patients are told to monitor their symptoms, that (if) they progress to a point where they need medical attention, that people should seek medical attention,” Sethi said. The CDC lists certain warning signs of when to seek emergency medical care.

FACT: “I’m not sure where that data’s coming from,” Sethi said. “The scientific consensus is that hydroxychloroquine is not a valid treatment for COVID.” Hydroxychloroquine, typically used to treat malaria, was first approved under Emergency Use Authorization by the FDA for treating COVID in March 2020. On June 15, 2020, the FDA canceled its recommendation after finding the medication was unlikely to be effective at treating COVID and resulted in some serious side effects, such as irregular heartbeat, according to the National Library of Medicine.

CLAIM: Dr. Pierre Kory, a vocal advocate for the off-label use of ivermectin, said the drug has been shown to help treat COVID in other parts of the world, claiming it could help “solve” the pandemic.

FACT: When tested in a lab, there was evidence that “the (COVID) virus can be killed by ivermectin, but at such high, toxic levels that they can’t be given to people,” Sethi said. “That just became a myth that ivermectin is something that could be used to treat COVID. It’s not.”

CLAIM: In a press release put out the day after the panel discussion, Johnson said COVID-19 is “an entirely treatable disease. Probably hundreds of thousands of people lost their lives that didn’t have to.”

FACT: Patients have various treatment options for COVID-19. The FDA has approved the antiviral drug remdevisir for use in adults and some pediatric patients and has issued emergency use authorizations for several monoclonal antibody treatments. For those who are hospitalized with COVID-19, the NIH has a set of guidelines for when to administer various treatments.

CLAIM: Parks, the vaccine critic, said Black people may need lower doses of the COVID vaccine because of a sensitivity to mRNA vaccines.

FACT: “I’m sad that such a claim would even be made, because that kind of misinformation is what leads to health disparities in our society,” Sethi said. The Pfizer-BioNTech and Moderna COVID vaccines are mRNA vaccines.

CLAIM: Many panelists said COVID vaccine development was rushed and they are not safe.

David Rapp, a professor of psychology and education at Northwestern University, said Johnson’s COVID-19 panel provides “a good case where someone is trying to offer inaccurate information to a constituency that already would be prone to believe it.”

In addition, advocating inaccurate ideas makes it difficult to have productive debates about what is true or false within the information people receive.

“The way that (the issue is) framed might suggest that the medical community writ large is … less interested in care,” Rapp said. “Framing viewpoints in this way is a really clever and strategic method of getting people to think about who they should rely upon.”

Michael Wagner, a professor in the School of Journalism and Mass Communication at UW-Madison, noted that midterm elections are coming up in November. Johnson recently announced he will run for a third Senate term, and Wagner said he may be trying to make inroads among the most ideologically extreme of his supporters.

“It seems to be more of a way to generate support from the very far right,” Wagner said. “It might be a way to try to generate some kind of grassroots social media support for his untested and unproven theories about the pandemic.”