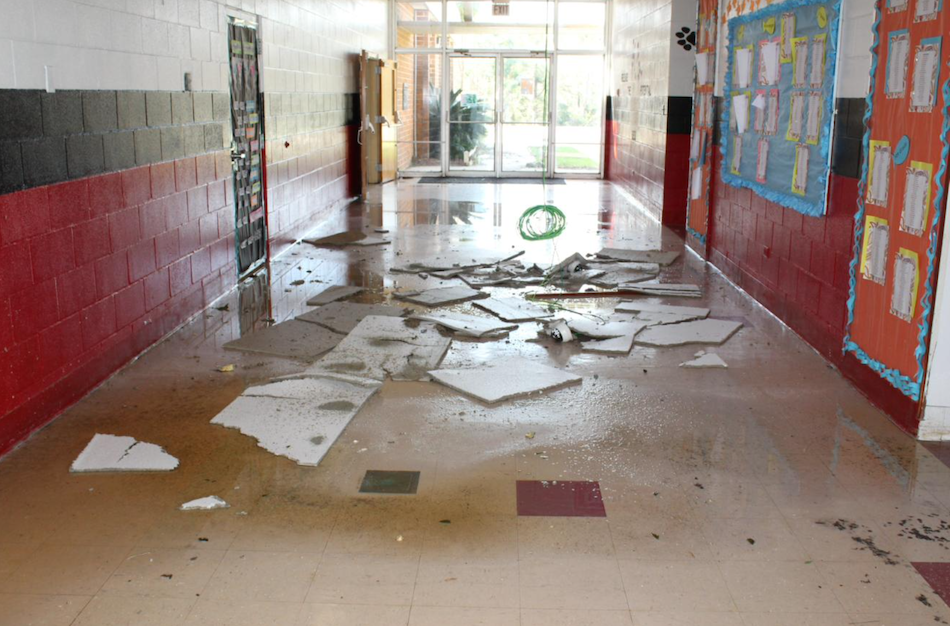 A flooded hallway of Blountstown Elementary School in Blountstown, Florida, is shown after Hurricane Michael in 2018. (Photo courtesy of Calhoun County School District)

Children who had attended Blountstown Elementary School are bused to two separate campuses, at which many pupils are placed in portable classrooms and have their lunch delivered from an off-campus kitchen.

“We’ve repaired lots of things, but we’ve still got some of the biggest stuff left to do,” said Superintendent Darryl Taylor Jr., noting that the district still hasn’t begun to construct a new elementary school to replace the one battered by the hurricane. “And [the] pandemic just made them a little more difficult.”

School districts across the country that serve some of the nation’s most vulnerable children, like those in the Calhoun County School District, don’t have the financial resources to rebound from natural disasters, a Government Accountability Office study released last week found.

But as Democrats in Congress consider which pieces of the Biden administration’s rejected Build Back Better Act to try to pass, it’s unclear whether money included in that original legislation to fund school construction will be included in those pieces.

By the Federal Emergency Management Agency’s account, more than 300 presidentially declared major disasters in all 50 states and U.S. territories occurred since 2017.

The GAO study, completed as part of the additional supplemental appropriations for Disaster Relief Act of 2019, reported that between 2017 and 2019, more than half of the nation’s school districts and two-thirds of all students were in counties that experienced these disasters.

It also found that of the school districts receiving federal disaster assistance during those years, 57% served a higher than average percentage of students in two or more socially vulnerable groups.

In other words, these districts typically had more students whose families have low incomes, people of color, English learners or those living with disabilities.

“The key myth to dispel around disasters is that people often think disasters affect all people and all communities in the same way, but we know that that isn’t true,” said Betty Lai, a developmental psychology professor at Boston College, whose work focuses on how disasters impact children and families.

“Certain groups are more vulnerable because of poverty and racism, and disasters amplify those effects,” Lai said.

In a research brief on the topic that she co-wrote with Annette La Greca of the University of Miami, Lai noted that children who are members of marginalized groups are more vulnerable to the negative impacts of disasters, like exposure to life-threatening events or losing their homes.

According to Calhoun County’s Taylor, who was interviewed for the GAO report, students in his district continue to be surrounded by reminders of Hurricane Michael. He said nearly everyone’s home was damaged, and many lost their homes and had to move.

School officials interviewed by the GAO said grades and test scores dropped as schools delayed reopening to make sure facilities were safe. And the stress caused by disasters followed students into the classroom, keeping them from focusing on their studies.

One of the primary efforts that can be made on a national level to reduce children’s disaster-related trauma, Lai said, is to improve school infrastructure so that buildings are fortified to withstand such threats.

U.S. Rep. Bobby Scott, D-Va., who chairs the House Education and Labor Committee, introduced legislation a year ago that would have set aside money to help school districts replace aging buildings. That bill, the Reopen and Rebuild America’s Schools Act, was added to the Build Back Better Act.

The massive spending bill, which stalled in the Senate earlier this month, would have allocated approximately $40 billion to reconstruct and renovate America’s schools. President Joe Biden said in a press conference last week that he expects the Build Back Better Act will be broken up for Congress to pass portions of it.

Scott said in a prepared statement that the GAO’s findings show the need for Congress to pass such a measure.

“The COVID-19 pandemic and recent natural disasters nationwide have been powerful reminders that our public school buildings are in urgent need of repair,” Scott said.

“However, we cannot expect schools to prepare for our changing climate or recover from future disasters without dedicated federal funding for school infrastructure.”

The Calhoun County School District was able to pay for many of its schools’ repairs with insurance, but Taylor said the payout didn’t come close to covering the cost of a new elementary school.

The district had to seek state and federal funding for a new building, which is becoming more expensive as construction costs rise.

“We will have been almost six years after the storm, hopefully, before we get into that,” Taylor said. “That’s a long time.”