Lack of action on student debt could impact Schumer, other Democrats 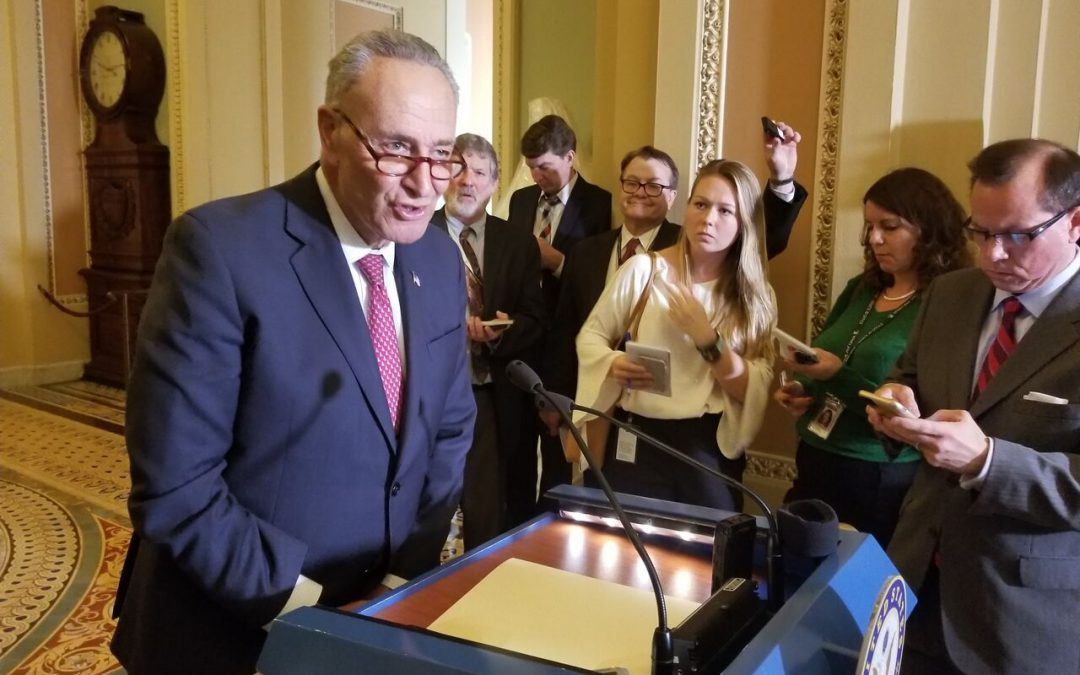 Senate Majority Leader Charles E. Schumer is up for reelection this November.

WASHINGTON — In the two-and-a-half decades since he earned his master’s degree in counseling from the University at Albany, Matthew Flowers Jr. has been chipping away at his student loan debt.

The Troy resident had to delay buying a house until last year and has limited contributions to his retirement fund because of the $40,000 he still owes from his original loan, which he described as “a weight around my neck.”

“I’ve been able to make payments here and there,” Flowers said, “but the financial strain it’s put on me has been kind of nerve-wracking.”

Flowers is one of approximately 2.5 million New Yorkers who collectively owe $93 billion in student loans, according to the U.S. Department of Education. And like many voters throughout the Empire State, Flowers is looking at candidates in the November midterm elections to see where they stand on the national student loan debt crisis.

Among the seats up for grabs in New York is that of Senate Majority Leader Charles E. Schumer, who has been a vocal advocate of canceling student loans in recent years.

He began calling for widespread student loan debt forgiveness toward the end of Donald J. Trump’s presidency. Schumer has introduced two resolutions — one in 2020 and the second in 2021 — calling on the president to cancel $50,000 of student loan debt per borrower.

“This does not require legislation,” Schumer said at a town hall hosted by the Student Debt Crisis Center on Jan. 27. “We’ve all read about all the difficulties of getting bills done, particularly in the Senate with so many intransigent Republicans. That is not true with student debt — the president can do it with the flick of a pen.”

Because the 50 Senate Democrats don’t have the 60 votes needed to end a GOP filibuster of legislation to eliminate or reduce student loan debt — and not all Democrats may support the idea — Schumer and others are pressuring President Joe Biden to issue an executive order eliminating $50,000 in debt for every student borrower well before the November midterm elections.

According to a Morning Consult/Politico poll published in December, 62 percent of Americans back some form of student loan forgiveness, and 19 percent are in favor of wiping federal student loan debt for everyone.

“Is Biden going to stab his party’s Senate majority leader in the back?” said Thomas Gokey, of Canton, St. Lawrence County, who is policy director at the activist group Debt Collective. “If the Democrats don’t deliver (on student loan debt cancellation), it does put Schumer in a difficult spot going into reelection.”

A student loan payment pause meant to help offset economic hardships of the pandemic is scheduled to end May 1. Gokey believes that if Democrats don’t act to reduce or eliminate student loan debt before then, it will hurt them at the polls.

Brendan Rooks, with the Student Debt Crisis Center, agrees. Democrats may lose seats in Congress if the Biden administration doesn’t cancel student loan debt, he said, and the fallout could extend to the 2024 presidential election.

“We’re trying to push on the president and the administration to cancel student debt because we feel that if he doesn’t, we may lose our majority,” Rooks said.

Biden has in the past, however, questioned the legality of the president canceling student loan debt.

“I understand the impact of debt, and it can be debilitating,” Biden said at a CNN town hall in Milwaukee a year ago. “I am prepared to write off the $10,000 debt but not $50 (thousand), because I don’t think I have the authority to do it.”

White House Chief of Staff Ron Klain told Politico in early April that the president had asked the Education Department to prepare a memo on his legal authority to cancel the debt and planned to release the findings. But the Debt Collective obtained documents last year showing that the memo was circulated within the administration as early as April 5, but has not been made public.

Last Wednesday, Schumer and 84 other congressional Democrats sent a letter to Biden requesting he release the contents of that memo, and renewed calls for the immediate cancellation of $50,000 in student loan debt per borrower.

In press briefings on Jan. 26 and 27, White House press secretary Jen Psaki reiterated the president’s willingness to sign a bill that would provide $10,000 of relief, but said he is continuing to look at what actions he can take administratively.

“The president is going to make these decisions based on what we’re seeing in economic data and what we feel is certainly needed at this time in the country,” she said.

Flowers said the $50,000 “would be a great start” and would cover his remaining student loan debt. But for many Americans that isn’t enough.

In the December Morning Consult/Politico poll, support for canceling all student loan debt is highest among millennials and Black voters.

A report released by the Education Department in January 2021 found that 86 percent of Black bachelor’s degree recipients had to borrow money to complete their education. The average amount borrowed exceeded $70,000. Other Education Department data indicates one-third of borrowers are between 25 and 34 — the highest proportion of any age group.

Student government leaders from colleges and universities across the country — including the University at Albany and Rensselaer Polytechnic Institute — signed a letter Jan. 18 urging the Biden administration to cancel all federal student loan debt.

“I have to think about what’s in the best interest for all of us as students,” said Syracuse University Student Body President David Bruen, one of the student leaders who helped organize the group. “I think another reason is … I’m a student. And I’m worried about my debt.”

Even if Flowers’ loan is canceled, student loan debt will remain an important issue for his family. His son, who’s in middle school, is already considering foregoing college because he’s worried about the expense.

Flowers didn’t disclose who he supports in New York’s June 28 Republican and Democratic primaries for House members and Schumer’s Senate seat. But he did say he watched the Student Debt Crisis Center’s town hall with Schumer and other congressional leaders last week and that his student loan will be on his mind when he casts his vote.

“A lot of the people that I would vote for seem to be in line with (canceling student loan debt),” he said.