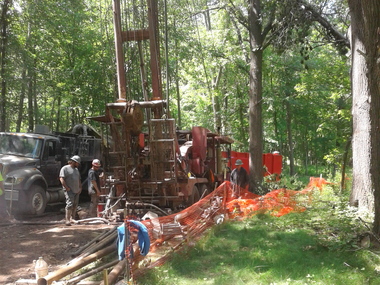 WASHINGTON — New York is slated to receive nearly $70 million to plug thousands of abandoned oil and gas wells scattered across the state as the Biden administration begins distributing funds from the $1 trillion bipartisan infrastructure law.

The infrastructure package, signed by President Joe Biden in November, includes a $4.7 billion program to alleviate the public health risks posed by abandoned oil and gas wells, called “orphan wells,” left behind by companies that went out of business as far back as the late 1800s.

“These oil and gas wells are the discarded remains of extractive industries who have left it up to states, to tribes, to the federal government and community groups to clean up their mess,” said Interior Department Senior Advisor Winnie Stachelberg.

The White House said the program will create thousands of jobs, revitalize rural economies and address the impact of pollution on historically marginalized communities. Tribal nations are eligible for funding through the tribal orphan well grants program, a $150 million component of the broader program.

New York – home to 6,809 orphan wells, including 1,912 with insufficient documentation – is one of 26 states that requested the federal grant money in December. The state Department of Environmental Conservation placed the estimated cost of plugging all 4,897 documented orphan wells at $248 million – more than triple what the state will receive in federal funding.

The department's New York Works Well Plugging Initiative has plugged 365 orphan wells since 2013, using a scoring rubric to prioritize those causing the greatest environmental impact and posing health risks to nearby communities.

Prior to plugging the well was surrounded in a brine burn. The well was plugged in 2015 and vegetation has regrown after the site was plugged. (Google Earth)

Though the federal funding will not be enough to plug every New York well, DEC Director of Mineral Resources Catherine Dickert said it will expedite the existing initiative. She anticipates the guaranteed funding stream will entice contractors to grow their workforce so they can take on more plugging projects.

"I think one of the best things about the federal funding is that it gives us that assurance that we're going to have a new funding opportunity for several years," Dickert said. "Our hope is that then the companies will have confidence to hire more people and buy more equipment and have several crews running in order to perform the work."

The DEC contracts with companies on both sides of the New York-Pennsylvania border, Dickert said. With Pennsylvania set to receive nearly $331 million in federal funding – a higher sum than New York – investments in the neighboring state's workforce might advance New York's plugging efforts as well.

The Interior Department has documented more than 130,000 orphan wells nationwide, but a 2018 study by the Environmental Protection Agency estimated the number of wells could be as high as 2 million to 3 million.

A study by the Environmental Defense Fund, a nonprofit research and advocacy group, and McGill University found approximately 9 million Americans live within one mile of an abandoned well. In New York, hundreds of wells have been discovered next to houses, schools and even under a swing set on a playground, according to the DEC.

Most orphan wells date back to the late 1800s and early 1900s, she said, meaning the companies that drilled the wells are no longer in business to handle cleanup.

Some communities have used telephone poles or tree trunks to plug their leaking wells, but Adam Peltz, senior attorney at the Environmental Defense Fund, said a much more technical approach is necessary to prevent groundwater contamination.

"The well is more or less an open borehole that allows exchange of fluids and gasses between geological layers and the surface," Peltz said. "When you plug it, you pump cement down and basically lock all those layers in place to return the geology to more or less as it was and prevent fluid migration."

The state Department of Environmental Conservation conducts months of inspections and environmental impact tests before plugging a well, said Ted Loukides, chief of the DEC's Oil and Gas Compliance and Enforcement Section.

Plugging becomes more difficult when the land on top of wells has been developed for housing or businesses, he said. To find the buried wells, the agency deploys a fleet of drones bearing magnetometers that can detect disruptions in the Earth's magnetic field, he explained.

The DEC, which is training its staff members as drone pilots, is partnering with the New York State Energy Research and Development Authority to launch a drone-led detection program as early as April.