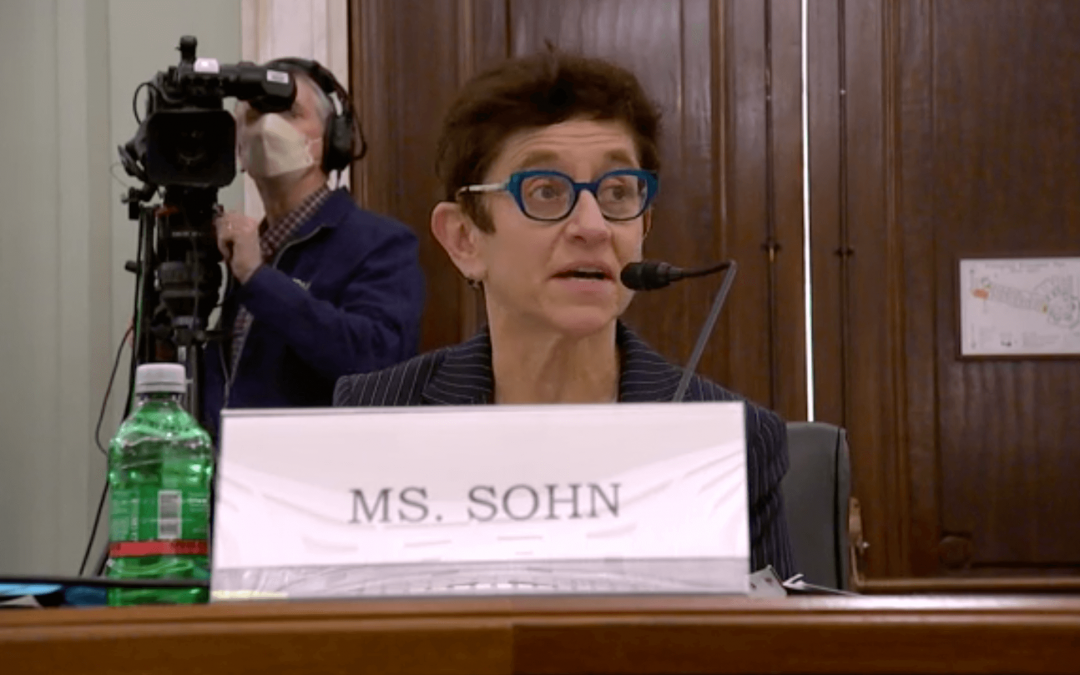 WASHINGTON — In her second appearance before the Senate Commerce Committee, Gigi Sohn, nominated to be a Federal Communications Commission commissioner, faced repeated Republican questioning Wednesday whether she could be impartial.

The top Republican on the committee, Mississippi Sen. Roger Wicker, had asked for the hearing after Gigi Sohn’s recent statement that she would recuse herself from FCC decisions on regulatory issues with which she was involved.

“It gives me no pleasure to say that my reason for being here today is to discuss outstanding questions about Ms. Sohn’s fitness and ability to serve as a commissioner,” Wicker said.

On Jan. 27, Sohn wrote to acting FCC general counsel P. Michele Ellison, saying she would recuse herself from retransmission consent and television copyright issues for the first three years of her term as FCC commissioner “to avoid any appearance of impropriety and in interest of ensuring that the public has full confidence that policymakers will make decisions free of bias,” according to the letter obtained by Bloomberg Law.

During the hearing, Senate Republicans again questioned Sohn’s ability to serve impartially, pointing to her role as president of Public Knowledge, a group that advocates for a free and open Internet and affordable access to communication tools.

“My recusal is voluntary, temporary, extremely narrow and concerns business unlikely to come before the full FCC,” Sohn testifed. “But in no way does it open the door to every other industry seeking a recusal for every position I and Public Knowledge have ever advocated.”

Sohn told the committee she only would only have to recuse herself from FCC decisions rarely. Using her previous experience against her “would prohibit anyone — not just public interest advocates and academics — who has taken any public position on telecommunications and media policy from serving on the FCC,” she said.

Wicker had requested a second hearing to address potential conflicts of interest. He said he has many policy disagreements with Sohn and has “outstanding questions about Ms. Sohn’s fitness and ability to serve as FCC commissioner.”

Wicker questioned the settlement that was reduced from $32 million to $700,000.

“Ms. Sohn has not been forthcoming on this settlement,” Wicker said. “When I asked her about the source of the $32 million settlement, she did not acknowledge that it had been reduced to $700,000. This raises questions as to what else she is not revealing about this litigation.”

Sohn testified that she has no financial liability stemming from the settlement.

“This wasn’t a settlement agreement that I negotiated, Sohn said. “Why didn’t I mention this number in my response to Sen. Wicker’s question? For the record, the confidential settlement barred me, as well as the network plaintiffs and SFCNY from mentioning the terms of the agreement in writing.”

Republicans also cited comments Sohn had made on Twitter that criticized Fox News and Sinclair Broadcast Group. Sohn said her opinions would have no bearing on her role as FCC commissioner, although she said she wished her tone had been “less sharp.”

Democrats on the committee, including Sens. Richard Blumenthal, D-Conn., and Ed Markey D-Mass., said that concerns about Sohn’s impartiality represented a “double standard” from the committee’s willingness to approve prior nominees with industry expertise — such as former FCC chairman Ajit Pai, who served as an associate general counsel for Verizon Communications — without any conflict-of-interest concerns.

Two of the four current FCC commissioners were appointed by Democrats and two by Republicans, leading to deadlock on many votes.

“Every day that [Sohn’s] confirmation is delayed is a day when the FCC cannot fully discharge the important responsibilities that we have given it,” said Sen. Tammy Baldwin, D-Wis.

Sohn initially appeared before the committee in December, when her nomination failed to advance after significant backlash from Republicans. She had been scheduled for another confirmation hearing Feb. 2, but that was postponed after committee member Sen. Ben Ray Luján, D-N.M., suffered a stroke the previous day.

Senators have until Monday to submit further questions regarding Sohn’s nomination. Sohn has one week to respond after that. The committee then would vote on whether to recommend that the Senate confirm her nomination.

This article was co-written with Doug Cunningham of UPI.