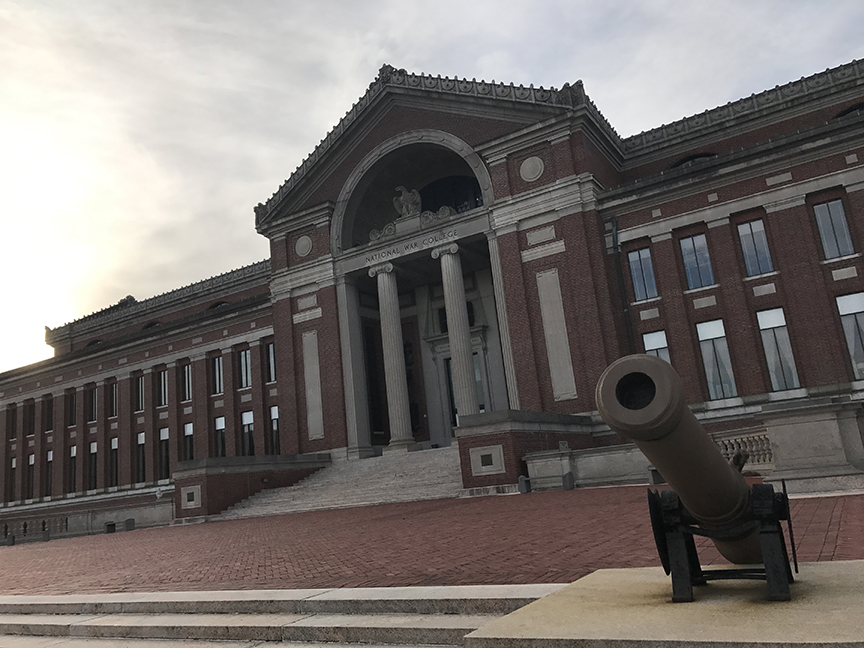 The National War College is one of several National Defense University institutions impacted by remote learning during the pandemic. (Medill News Service)

Schools nationwide have grappled with the downsides of online education during the pandemic, especially reduced in person interactions. At National Defense University, the stakes of remote learning go beyond the headaches of exchanging classrooms for Zoom breakout rooms — they have the potential to influence global security for years to come.

National Defense University, which is funded by the Department of Defense, trains military and diplomatic leaders for future top-level positions in national security. NDU, based in Washington, D.C., has five colleges, including the National War College and the College of Information and Cyberspace. Most students enrolled at NDU participate in a 10-month master’s program, including many of the international fellows.

International fellows are selected by the different military commands and come from a wide range of allied countries. Many of the fellows go on to senior positions in their armed forces and government agencies.

A key part of NDU programs has been the relationships forged between international and U.S. civilian and military leaders — personal connections that can be useful later. When a global conflict emerges, it’s easier to call a former classmate to hash out a problem rather than a potential enemy.

“They’re not coming here just for a good time for the year — although I hope they have a good time and are enjoying themselves — but it’s about building a network of friends and allies and partners and you can only do that if that relationship is ongoing,” said former ambassador Matthew Harrington, director of the International Student Management Office.

Despite the difficulties of forming meaningful relationships online during the pandemic, officials at NDU say the students have been able to connect in meaningful ways that they may not realize.

“They [the students] are absolutely convinced that everything about this is bad and they’re getting deprived of everything,” said Cynthia Watson, interim provost at NDU. “I don’t think that’s true.”

Watson pointed to the school’s efforts to have outdoor in-person events and get-togethers and the time together online during classes as important ways to get to know each other.

Like many schools, classes at NDU went remote in March 2020 and stayed predominantly online, so the 2020 graduates had spent about half of their time together learning in person. During the transition online, students leaned on existing friendships.

Students who started classes in fall 2020 and graduated in spring 2021 attended most classes online, although a few lectures or activities were held outside. Most of NDU’s student body, including international fellows, were able to get to campus with minimal problems despite global travel restrictions.

Currently, there are 153 international fellows are completing master’s programs at defense universities out of about 4,000 students, making up roughly 4 percent of the student body. In recent years, DoD sought to increase the number of international fellows at NDU. During the Trump administration, Secretary of Defense Mark Esper called for a 50 percent increase in foreign officers attending U.S. military schools.

During the pandemic, the problem for both international fellows and domestic students was the lack of chance encounters on campus during remote classes, Watson explained.

Rather than bumping into someone on the way to class, socializing occurred almost entirely in organized sessions, or outdoors when the weather permitted, prior to the return to campus in fall 2021, Watson said.

In fall 2021, students returned to campus in a limited capacity, so a large portion of classes are in person and students can attend in person as restrictions allow.

For the class of 2020 and the class of 2022 set to graduate this spring, online interactions serve as an extension on already established in-person relations. However, the class of 2021 took the biggest hit since they rarely interacted in an in-person capacity and had to build friendships entirely in a structured setting, said Jaimie Orr, dean of faculty and academic programs at the National War College.

Orr said that NDU, including the National War College, has looked to alumni networks to fill in gaps and bolster connections following graduation.

“The risk is the formative relationships were not made to the same depth as they would normally have been made,” Orr said. “You have to really pay attention to nurturing them over the coming years.”

Orr explained that although the alumni network has always regularly hosted programming, the pandemic has changed the look of events.

Many guest speaker sessions are now live-streamed and recorded. Networking sessions frequently rely on online breakout rooms to build ties in smaller settings. Each Zoom session or coffee chat outside of class is another personal connection formed that could be useful later down the line, Orr explained.

“I would make the case that the investment by the U.S. taxpayer pays dividends for years and years in terms of building alliances and partnerships,” Harrington said.