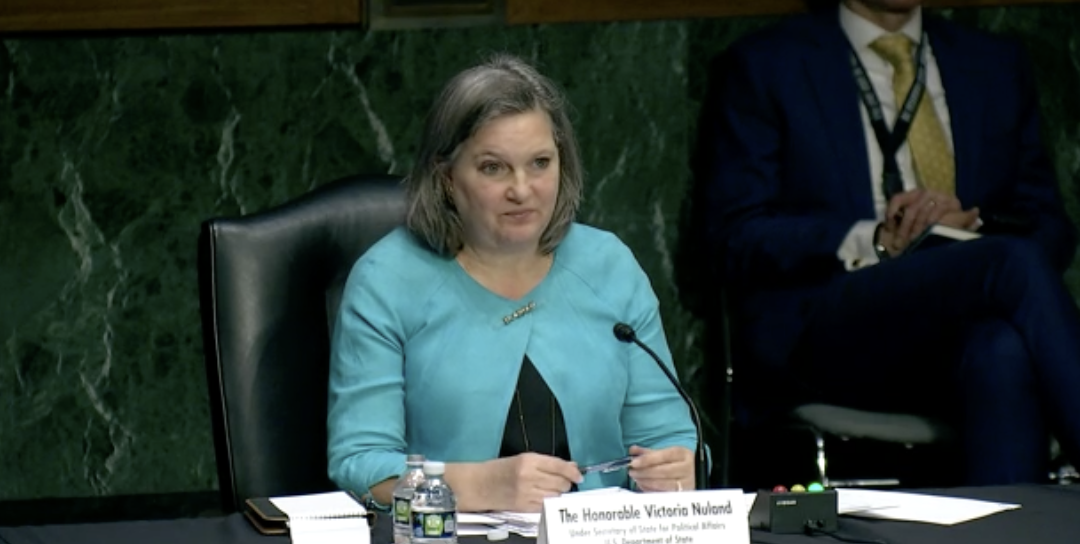 WASHINGTON — In a rare show of bipartisanship, lawmakers from both parties urged the Biden administration on Tuesday to take further actions against Russia and to increase support for Ukraine amid the Russian invasion of its neighbor.

“Until Putin relents, we must keep the pressure on …” Senate Foreign Relations Committee Chairman Bob Menendez said at a hearing on the invasion of Ukraine. “And of course, it means staying laser-focused on providing Ukraine every weapon, every piece of lethal assistance and every defense article possible so that it can defend itself.”

The Polish government announced Tuesday that it is prepared to transfer its fleet of MiG-29 fighter jets to the U.S. following pleas from the Ukrainian government for either aircrafts or a “no-fly zone” over the country, according to The Hill.

While Under Secretary of State for Political Affairs Victoria Nuland testified before the Senate that she was not aware of an agreement with Poland, lawmakers expressed interest in assisting the Ukrainian government by providing aircrafts. The Pentagon rejected the offer from Poland later in the day, saying Defense Department officials “do not believe Poland’s proposal is a tenable one.”

“I know that all things associated with this conflict have a certain degree of risk, but at the same time there are people dying and there is I think a worldwide clamoring, including by our people here, to provide support and help to the people of Ukraine and to help end this outrage,” Sen. Mitt Romney, R-Utah, said.

Senators at the hearing also expressed support for moving forward with the omnibus spending bill, which would provide more than $12 billion in emergency funding for the Ukraine crisis.

The United States and its allies have imposed thousands of sanctions against Russia since it first ordered troops into Ukraine on Feb. 22. In his latest effort to punish Moscow for the invasion, President Joe Biden announced a ban on U.S. imports of Russian oil Tuesday morning.

“The United States is targeting the main artery of Russia’s economy,” Biden said at a press briefing. “We’re banning all imports of Russian oil and gas and energy. That means Russian oil will no longer be acceptable at U.S. ports, and the American people will deal another powerful blow to Putin’s war machine.”

However, senators from both sides of the aisle expressed concern about the possibility that the U.S. may turn to Venezuela for oil in light of the ban on Russian oil. Senior U.S. officials met with Venezuelan President Nicolas Maduro over the weekend for the first time since the U.S. broke off diplomatic relations with the country in 2019.

“The Biden administration’s efforts to unify the entire world against a murderous tyrant in Moscow is commendable but should not be undercut by propping up a dictator under investigation for crimes against humanity in Caracas,” Menendez said. “The democratic aspirations of the Venezuelan people, much like the resolve and courage of the people of Ukraine, are worth much more than a few thousand barrels of oil.”

Menendez and Idaho Sen. Jim Risch, the top Republican on the committee, also said they were concerned that the U.S. returning to the JCPOA, also known as the Iran nuclear deal, could benefit Russia financially.

Risch said he is also concerned that a new deal with Iran will divide a Senate that is fairly unified at the moment.

“There couldn’t be a worse time for the administration to be trying to come together on JCPOA and announce it when we’re in the middle of the mess we’re in right now,” Risch said.

However, Nuland said there is extreme concern that this is not an issue that can wait.

“The last thing we need on top of Putin’s bloody war is a nuclear-armed Iran,” she said. “And what we can say in this setting is that nuclear capability of the kind that we don’t want to see could come to Iran in a matter of weeks and months if we don’t get them back into this agreement, and that is not good for the planet. And to have both Iran and Russia able to threaten all of us in that way would be catastrophic.”