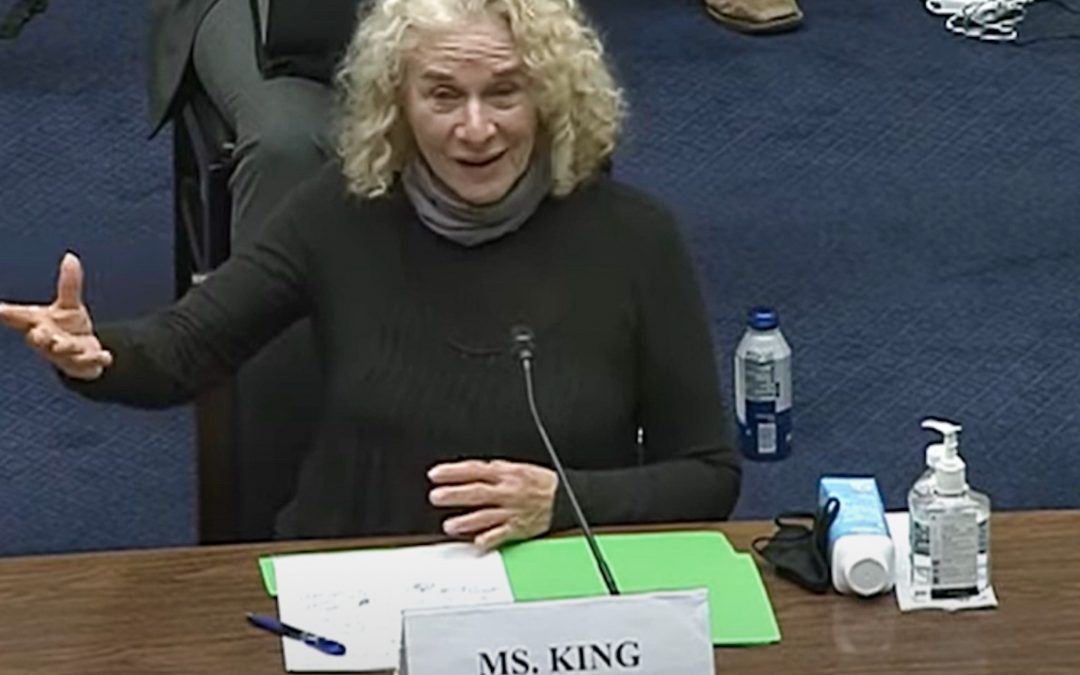 Singer-songwriter Carole King testifies at the House Oversight subcommittee hearing. (Livestream from the Subcommittee on Environment)

WASHINGTON — Environmental activist and singer-songwriter Carole King criticized the U.S. Forest Service’s use of logging as a way to combat wildfires at a House hearing Wednesday, saying that logging operations contribute to carbon emissions.

“I know it’s not easy to overcome decades of timber industry influence, money and misinformation, but our kids and grandkids are calling us to action,” King told the Environment Subcommittee of the House Oversight and Reform Committee.

King, a multiple Grammy winner, is a 44-year resident of Idaho where 439,600 acres of land burned in wildfires in 2021, according to the National Interagency Fire Center. In Washington, 674,222 acres burned.

A 32-year environmental advocate for the Northern Rocky Mountains, King said fewer trees to absorb carbon and carbon emissions from trees being burned after logging operations will only increase wildfires, she said.

The hearing was intended to highlight prevention of and preparation for increasingly dangerous wildfires. While the U.S. Forest Service outlined plans for wildfire prevention, environmental experts and advocates warned against incentivizing tree removal.

“Timber sales are certainly one of those products that we use to help manage the forest, and so we still need to do more of that because we have so much (flammable) material on the landscape,” Moore said.

The Forest Service’s 10-year Wildfire Crisis Strategy, partially funded by the Bipartisan Infrastructure Law’s $5.5 billion investment in the agency, will increase forest health treatment levels by up to four times the current levels in the West, Moore said. The plan, scheduled to be released this spring, will treat an additional 20 million acres of national forests and grasslands and 30 million acres of other federal and private land.

Moore said the Forest Service will continue burns for vegetation management, but he also said he “absolutely would” talk with Native communities, which have a long history of using controlled burns to mitigate wildfires.

Benefits of Native-controlled burns include carbon sequestration – carbon from the atmosphere stored into the soil, fire-adapted plants and a “thriving” ecosystem, said traditional ecological practitioner Ali Meders-Knight of the Mechoopda Indian Tribe of California.