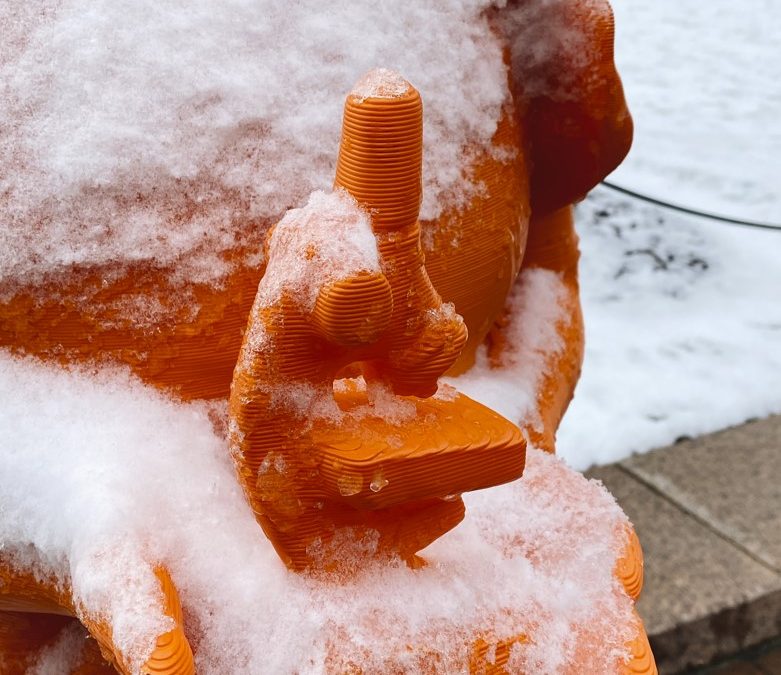 A 3D-printed statue in the Smithsonian Castle garden cradles a microscope.

WASHINGTON — More than 100 life-size orange statues of women are scattered around the National Mall, clustered in the gardens at the Smithsonian Castle and tucked inside the Natural History and Air and Space museums.

The women hold globes, notebooks, tools, brains — symbols of their work — and one portrays Ahna Skop, a geneticist at the University of Wisconsin-Madison. 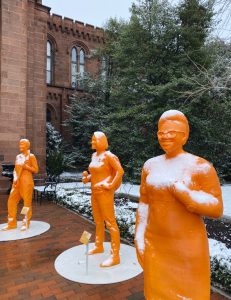 A younger Skop, finding her footing as a women in STEM, “wouldn’t believe it in a million years,” Skop said in a telephone interview. “I would not even believe that I’d have a statue somewhere.”

The statues were commissioned IF/THEN, an initiative of Lyda Hill Philanthropies, which teamed up with the American Association for American Advancement of Science to find 120 women at various stages of careers in the science, technology, engineering and math fields who could serve as ambassadors to girls considering the field.

The name IF/THEN is a play on the coding term: If she can see it, then she can be it.

Hundreds of women applied — and Skop was among those accepted. Those selected represent 42 U.S. states and territories, and half are women of color. Skop is the only ambassador from Wisconsin.

“We wanted to make sure that these are women who have contributed and have accomplished so much, but also have more to do,” said Margaret Black, who co-founded IF/THEN in 2019 and is “a very proud Wisconsin native” from Oshkosh.

Black, a director at Lyda Hill Philanthropies, said she started IF/THEN “to activate this culture shift among young girls and open their eyes to all the amazing STEM careers that are already out there.” 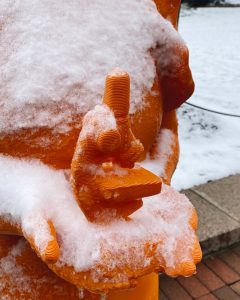 The IF/THEN team also looked for ambassadors who would exhibit to young girls — particularly the middle-school demographic, which Black said is when many young girls are alienated from STEM — the possibilities for women within the field.

“We have two that are riding wheelchairs. One is a trained ballerina and rocket scientist. One is a blue-haired molecular biologist who designs fashion. … There’s a cosmetic chemist who makes eyeshadow. These are jobs that you might not know exist if you’re 12 years old.”

Skop said her work sits at the intersection of art and science — she grew up in a family of artists who blurred the lines between art and anatomy, jewelry-making and dissection.

At the University of Wisconsin-Madison as a PhD student, Skop “fell in love with the science through the beauty side.” She waxed poetic about the dynamism and the art of biology, of the cell, of mitosis. “I realized when I started seeing things in my textbooks — how beautiful they were — I wanted to figure out how they worked.”

Now, Skop brings this perspective to her ambassadorship — IF/THEN provided ambassadors with mini-grants and media training to further both their research and their public engagement. 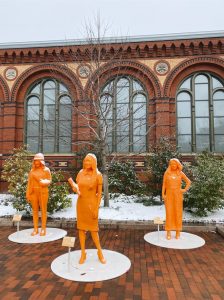 Three of the 120 IF/THEN statues clustered together in the Smithsonian Castle garden. (Julia Mueller/Medill News Service)

Black and the IF/THEN organizers came up with the idea to memorialize the unique intersectional work of their ambassadors and contribute to women’s representation “in an extraordinary way.”

When the IF/THEN ambassadors gathered for the first time in 2019, the program commissioned scans and developed 3D-printed statues of the 120 women.

“In the top ten cities in the United States, plus D.C. and San Francisco, there are less than half a dozen statues of real women, and that is just a shocking statistic.  … So we thought to ourselves, we need to change that,” Black said.

When the statues were first displayed together on March 5 for opening weekend of the Smithsonian’s Women’s Futures Month festival — a STEM-focused twist on Women’s History month — “#IfThenSheCan – The Exhibit” became the largest collection of statues of women ever assembled, according to organizers.

That weekend, many of the ambassadors flew to Washington to stand next to their statues and interact with visitors. Black visited the exhibit with her daughter and mother.

“This has been one of the most meaningful projects I’ve ever worked on,” Black said.

She described a photo of her daughter looking up in awe at nuclear engineer Ciara Sivels next to her statue at the Smithsonian. “It just basically tells you what this is all about. It’s about young girls seeing what a scientist looks like… They’re no longer going to draw a picture of Albert Einstein when someone asks, what does a scientist look like?”

But young girls aren’t the only target audience for these representation initiatives — and Black said she saw “tons of sons and young men” stopping at the statues during opening weekend to learn and engage with the ambassadors. 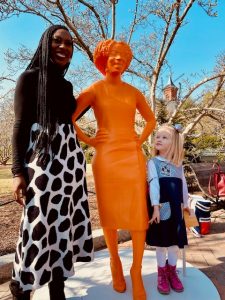 “I think you have to start young, and I think also young boys and non-binary people also have to be engaged in all of this work,” Skop said. “Because we need support. Women in STEM have lots of struggles throughout scientific careers still to this day. And I think the younger you are interacting with young children of all genders, that that’s really, really important that they see us as a valuable part of science and a respected part of science.”

The IF/THEN project is for all genders and all ages “to realize that there are inspiring role models all around us” and that science is more accessible than it may seem, Black said. “While the content is typically aimed at girls to help with the gender pipeline for women, everyone can be inspired.”

Skop and the other ambassadors also engaged with many other IF/THEN initiatives, including the CBS program Mission Unstoppable, which was nominated for a 2020 Daytime Emmy for outstanding educational of informational series. Hosted by actress Miranda Cosgrove, the educational series showcases women in STEM and focuses on appealing to a young female audience: Skop said she’s in the queue for its third season.

“I think I wouldn’t be in science if I wasn’t doing public engagement,” Skop said. “I take my role as a scientist seriously… I think it’s really, really important that the work we do gets out to the public in a fashion in which they can digest it.”

The Smithsonian exhibit will run through March 27.