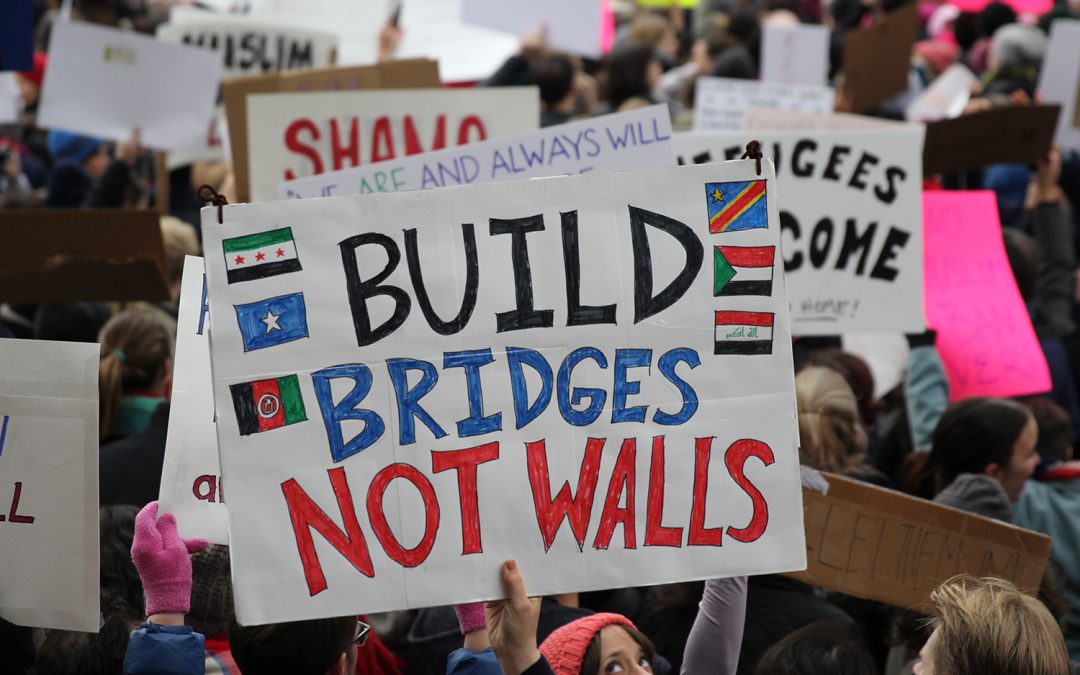 WASHINGTON — In 2021, CBP carried out over 1.6 million apprehensions at the border –– a level not seen for 20 years, according to a March report by the American Immigration Council.

As the crisis at the southern border worsens, immigration advocates and activists are increasingly emphasizing the racist, colonialist history of the border itself –– and the philosophical, theological and economic underpinnings of this history. In contemporary movements, advocates are drawing language and action from historical resistance to settler colonial expansion –– for example, manifest destiny, the Mexican-American War, and how these led to the creation of the southern border.

The current U.S. southern border was largely established by land exchanges during the Mexican-American War from 1846 to 1848. The war began following the U.S. annexation of Texas and disputes over its southern border. President James Polk strongly supported the idea of manifest destiny –– the idea that the U.S. was destined by God to expand across North America and spread democracy and capitalism –– and wanted to claim California and New Mexico as well.

Theologically, manifest destiny was rooted in the “Doctrine of Discovery” –– a 15th century proclamation by Pope Alexander VI that gave Christians the divine right to establish and claim land, power and culture, according to Reverend Kelly Gallagher, who has spoken on the church’s role in settler colonial thinking and manifest destiny.

Borders were an expansion of that –– the naming and claiming of whatever land that would establish that power, Gallagher said. “It was part of how people understood the world worked. What I am concerned about is how many people have never addressed how much they still believe that’s how the world works.”

During the Trump administration especially, rhetoric about the border emphasized who had the “right” to be here –– similar to the 1800s, according to Justin Akers Chacón, activist, author, and professor of U.S. history and Chicano studies at San Diego City College.

The economic benefits of expanding slavery and the plantation economy were also motivating forces of settler colonialism and manifest destiny. “These were ideological manipulations of religious thought used to justify economic colonization,” Chacón said.

On March 3, the national coalition Detention Watch Network hosted a day of action to advocate for the closure of immigration detention centers, cessation of deportations, and freedom for all current detainees. The action came in response to the recent increase in border apprehensions and deportations.

In 2021, Border Patrol agents carried out over 1.1 million expulsions under Title 42 –– a century-old public health authority instituted by Trump in March 2020 to expel individuals at the border without allowing them to seek asylum, the American Immigration Council report said.

Experts and activists state that such policies stem from and perpetuate the settler colonial nature of the border itself, with deadly impacts.

It’s a catastrophe at the border, Chacón said. People being deported back to Mexico with little infrastructure to support them. Some are living under bridges, on the beach, wherever they can. Many are being sent back to their deaths.

This is a mass refugee crisis like in Ukraine, but the response of the U.S. government under both political parties is to treat refugees at the southern border as criminals, Chacón said.

Just as current immigration policy can be traced historically, so can resistance, Cisneros said.

Near San Diego, the DWN action focused on closing the local for profit detention center run by CoreCivic, said Chacón.

The idea of abolishing detention centers comes from a long history of abolition movements, such as the abolition of slavery and 1800s resistance movements against the expansion of the plantation economy in the context of manifest destiny, Chacón said.

“In a lot of ways, contemporary activism –– in the way that its challenging borders, citizenship, and nationality –– is connected to this history of resistance to manifest destiny and expansion,” Cisneros said. “As long as there has been this push for manifest destiny and expansion, there has always been resistance to that by communities along the [southern] border.”

Acknowledging the colonialist history of the border –– its philosophical, religious, and economic roots –– also underpins the language of resistance that exists today.

When the Trump administration passed its 2017 “Muslim ban,” some activists proclaimed, “no ban on stolen land,” Cisneros said. This phase highlighted solidarity among immigrant and Native communities through a reference to settler colonial history and manifest destiny.

The phrase led to another saying that highlighted solidarity with Muslim communities, Native communities, and immigrants –– “no borders on stolen land,” Cisneros said.

Today, many activists implicitly reference the history of the Mexican-American War by proclaiming, “We didn’t cross the border; the border crossed us.”

Such language is what helps organize people, Cisneros said. “It’s what raises consciousness.”

Advocates like Rev. Gallagher are calling on churches to acknowledge the role of Christianity in colonialism. She told The Grio that theology needs serious deconstruction particularly in areas that uphold manifest destiny.

In a 2020 speech, she said, “Native American theologian Vine Deloria, in his foundational text, God is Red, writes, ‘Christianity itself may find the strength to survive if it honestly faces the necessity to surrender its narrow interpretation of history and embark on a determined search for the true meaning of human life on this planet.’ It is time for those who would call themselves followers of Jesus to claim the faith that will acknowledge the past, consider its impact on who we are now, and seek to take steps toward Truth and Conciliation.”

In a tribute to Black liberation theologist James Cone published by Union Theological Seminary, Rev. Dr. Jacqui Lewis writes, “If we are not disrupting the myth of white supremacy and manifest destiny, we are not the Church. This is our vocation. Disruption is a holy act, passivity a sin. Christianity herself must be liberated from white supremacy, greed, ego and the lie of manifest destiny.”