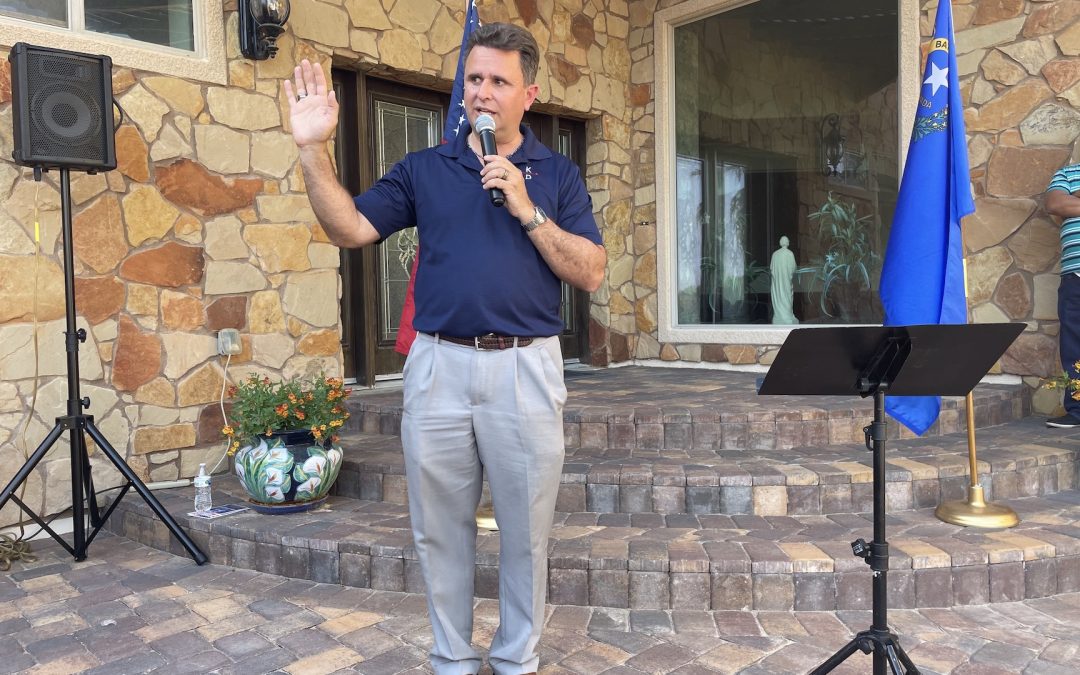 LAS VEGAS — Seven candidates are vying for the Republican nomination for secretary of state in Nevada, ranging from the most vociferous 2020 election denier – James Marchant – through a number of others who question Joe Biden’s legitimacy as president to varying degrees to Kristopher Dahir, who believes Biden won but that “some fraud” did occur.

Dahir says he is in his “own lane” as the only Republican candidate to publicly state that Biden legitimately won Nevada in 2020, although he believes there were “a lot of bad practices and some fraud that definitely happened.”

Dahir is running on a pro-business platform and wants to increase voter education and ballot security. He said the secretary of state does not have the authority to unilaterally change election laws.

“There’s a few [candidates] that are like day one, all computers gone,” Dahir said. “Are you going to steal them? How are you going to do that, because you can’t legally do that?”

“You’re angry now, you’re going to be really angry if that guy wins when he can’t do what he just told you,” he added.

Marchant, on the other hand, is the loudest 2020 election denier in the race and has the endorsement of MyPillow CEO Mike Lindell. Marchant vehemently believes election victory was stolen from then-President Donald Trump and faces defamation lawsuits from Dominion Voting Systems and Smartmatic for saying the companies rigged the 2020 election. According to his website, Marchant’s “number one priority will be to overhaul the fraudulent election system in Nevada.”

Marchant and former District Court Judge Richard Scotti, another Republican contender, have said they would decertify the Dominion Voting Systems used in 16 of Nevada’s 17 counties, and move instead toward paper ballots, the Nevada Independent and other news outlets have reported.

A majority of Nevada voters are either undecided or don’t plan to vote in the race, Of those remaining, a recent Nevada Independent poll of 500 likely Republican primary voters found, 16% said they would vote for Marchant, followed by 8% who said they would support Scotti and 7% who favor Jesse Haw, who has raised the most money at nearly $700,000. The other candidates each received less than 3% of the support.

Aguilar, whose platform centers around education, told the Nevada Independent that the next secretary of state must be a Democrat or “we’re not going to see some of the legislation that the governor and the Legislature have passed to make voter access stronger.”

To Aguilar, the secretary of state position is a regulating role that should be nonpartisan.

“You’re not certifying elections, the county commissioners are doing that,” Aguilar said. “But you’re setting up the parameters and the rules, and ensuring those rules and laws and statutes are being followed.”

As for rumors of voter fraud in 2020, Aguilar is unconvinced. He thinks “everything in Nevada was legitimate, and it was an election that was well run.”

“I think in the long run, there’s going to be a majority of Nevadans who are going to say enough is enough and call bullshit,” he said.

Even so, Aguilar said he is “absolutely” worried about the traditionally low voter turnout in the midterms.

“It makes me get out there to make sure that people are motivated to get to the polls, they understand what is at stake,” Aguilar said, adding that, as a battleground state, Nevada could determine the next president and the vote outcome has to be trusted.