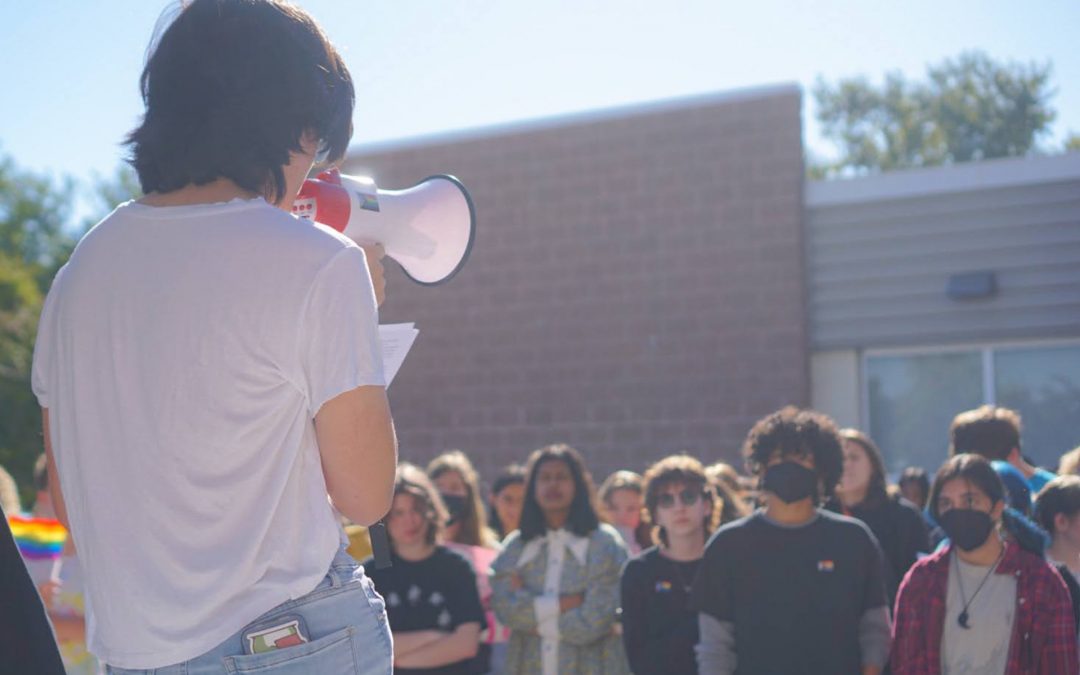 Students at Fairfax High School walk out in protest against new state policies that restrict the rights of transgender students. (Photo courtesy of Carys Owens)

FAIRFAX, Va.– Students across Virginia walked out of class Tuesday in protest against the state’s new policies that restrict the rights of transgender students.

Students at Fairfax High School walked out at 9:45 a.m. Tuesday and stood in front of the school for half an hour while students gave speeches through a bullhorn. Some students held miniature pride flags, while others wore pride flags around their shoulders. Senior Beatrice Stotz, who organized the school’s walkout, estimated that about 200 students participated.

The policies, which Republican Gov. Glenn Youngkin’s administration unveiled earlier this month, would require parental consent for a student to change the name or pronouns they go by at school. They also require transgender students to play on sports teams and use bathrooms and locker rooms associated with their sex assigned at birth.

The guidelines are slated to take effect after a brief public comment period and approval by the state superintendent. Stoz said she hopes the walkouts will pressure Youngkin’s Department of Education to revoke the new policies and encourage individual school districts to reject them.

Vizcardo-Lichter said the new policies, which require that schools get permission from parents before students can participate in gender identity counseling, will harm transgender students’ mental health.

“Removing access to mental health support and resources is the most awful thing we could do at this point in Virginia when considering the mental health of our students,” she said.

The rules also say that even if a parent has instructed the school to change the name and pronouns used to refer to their child, staff and fellow students can still refuse to use the student’s preferred pronouns and name if it violates their beliefs.

“When we’re talking about transgender students, using a student’s true pronouns and name has consistently been shown to prevent suicide,” Vizcardo-Lichter added.

However, Youngkin’s office said the new policies are designed to support parental rights.

“The guidelines make it clear that when parents are part of the process, schools will accommodate the requests of children and their families,” Macaulay Porter, Youngkin’s spokeswoman, said in a statement. “Parents should be a part of their children’s lives, and it’s apparent through the public protests and on-camera interviews that those objecting to the guidance already have their parents as part of that conversation.”

But South County High School senior Zayd Khan, who is in charge of social media for the Pride Liberation Project, said parents’ rights should not come at the cost of students’ well-being.

“Schools are meant for students, not for parents,” Khan said. “They need to put students first.”

Youngkin was elected last fall on a wave of parental anger over issues like pandemic-related school closures and classroom discussions of racism. Vizcardo-Lichter said in her opinion the governor’s policies are politically motivated.

“It isn’t a coincidence that these changes happen when Gov. Youngkin is going out of state to campaign for other candidates,” she said. “This is very clearly an attempt to politicize our schools so that Gov. Youngkin can win the votes of conservatives.”