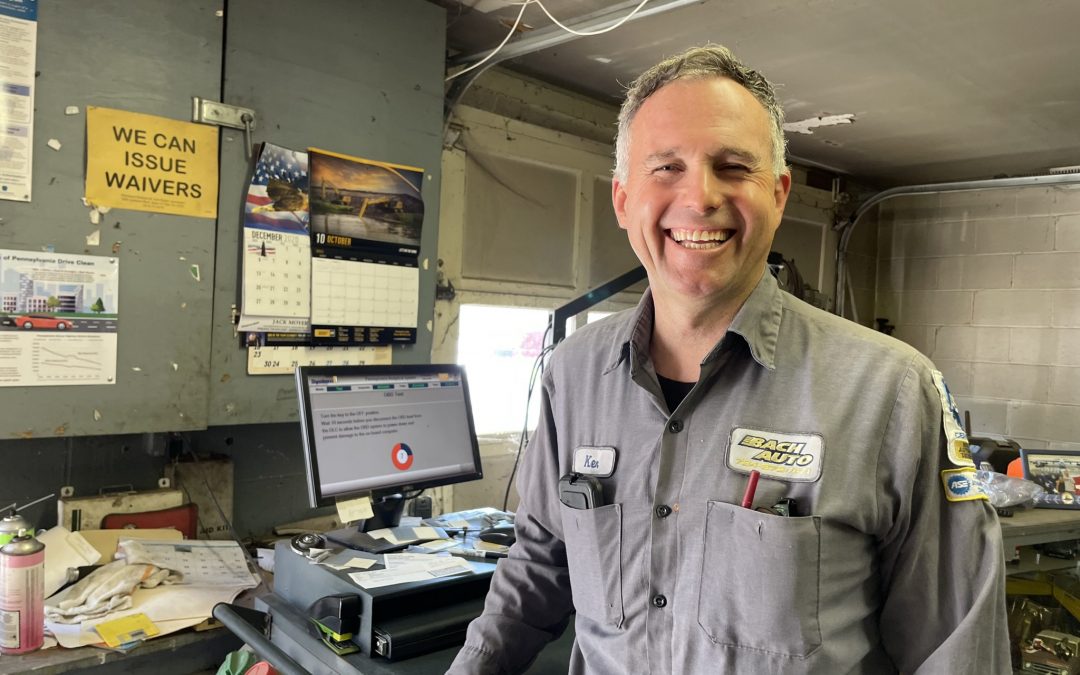 SMITHTON, PA – Ken Bach knows he’s unlikely to win the race to represent Pennsylvania’s 58th District in the state House of Representatives. But in a pivotal election year, he thinks it’s important to have competition.

Bach, an auto mechanic, is a lifelong resident of the rural district about an hour southeast of Pittsburgh. He is running as a Democrat in a district that has swung sharply in favor of Republicans since 2016. He seems well-liked and respected in his hometown of Smithton. But Bach knows the “D” next to his name on the ballot is probably a non-starter for his campaign.

“I just see that we need to have discussions on issues, and unopposed means there’s no discussion on issues,” he said. Bach previously served on his local school board and is especially concerned with increasing the amount of money the state directs to public schools.

Races for legislative seats like this one are crucial in battleground states like Pennsylvania, but many voters across the state do not have a choice over which party will represent them in Harrisburg. Candidates for more than one-third of the 228 seats up for grabs this year are running unopposed in the general election, according to an analysis by Medill News Service. Both parties are sitting out dozens of races. Democrats are sitting out 48, while Republicans are sitting out 36.

In Pennsylvania, there is limited state-level polling to suggest which party will control each chamber. But an analysis of the state’s newly drawn legislative boundaries suggests that the House and Senate will both be more competitive than they have been in a decade.

Republicans have held majorities in the Pennsylvania State House since 2011 and the State Senate since 1994. When a party has a majority in both chambers, they essentially have full control over which bills get passed along for the governor to consider.

That control is becoming increasingly important. Recent U.S. Supreme Court decisions heaped significant power and responsibility onto state governments earlier this year, and some observers have predicted that this trend will continue. State legislatures have enormous – and growing – influence over abortion laws, pollution regulation, election administration and more.

In the 58th District, incumbent Representative Eric Davanzo, a Republican from Smithton, received almost twice as many votes as his Democratic challenger in 2020. The 58th is still soundly Republican after redistricting. The boundaries give the GOP a nearly 60-40 electoral advantage, according to an analysis from Dave’s Redistricting App, a popular tool for evaluating legislative districts.

For that reason, Davanzo is likely to win reelection. But Smithton voters are glad to at least have a choice.

Marty Ponebshek, a local 911 dispatcher, said he typically votes for Republicans. But he spoke fondly of both candidates for the 58th District. “They both have great aspirations and great ideas about how to make the Commonwealth better as a whole,” he said.

Ponebshek added that he thinks every race in Pennsylvania should be contested, even in districts with a clear partisan lean. “Unfortunately, everything is a two-party system now. Everything is so divided, red or blue. But there's still that off chance somebody might be able to bring out something good, they might be able to rally both sides and gain traction on both sides,” he said.

Mona Shaffer, owner of Jack’s Grocery Store in Smithton, said she also tends to support Republicans. But she similarly appreciates having the opportunity to choose. “It's always good to have a second person,” she said.

She cited her disappointment that Republicans failed to challenge Ted Harhai, the district’s Democratic state representative from 1998 to 2016, for much of his tenure. “Even if you didn't like him, you had no other choice,” she said.